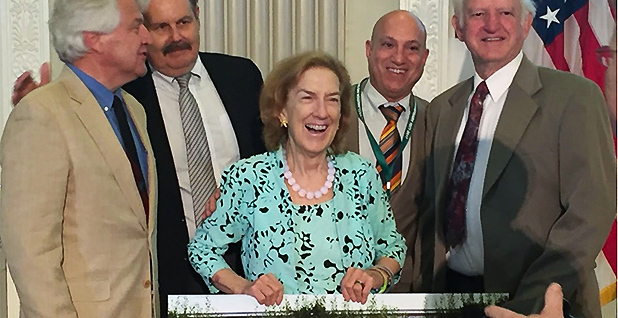 Louise Dunlap in 2017 holding a picture of President Carter signing the Surface Mining Control and Reclamation Act of 1977. To the left is former Office of Surface Mining Reclamation and Enforcement Director Joe Pizarchik. R. John Dawes

Louise Dunlap, an environmentalist and coal field advocate who marshaled key legislation victories over the span of her 50-year career, died Thursday. She was 75.

A memorial service is yet to be scheduled, Dunlap’s family said, citing the ongoing COVID-19 pandemic. Dunlap had acute myeloid leukemia.

Fellow environmentalists recalled Dunlap this week as a tireless advocate and mentor.

"It’s hard for all of us because she was so meaningful in our lives and to the benefit of, really, the nation in terms of reclaiming abandoned mine lands," said Foundation for Pennsylvania Watersheds Executive Director John Dawes.

He added: "She was a wonderful, loyal friend. And, to me, a little bird that whispered good guidance in my ear. She was just a positive force for good."

Despite being inextricably linked with the measure’s passage — at the 1977 Rose Garden ceremony to sign the bill, President Carter praised Dunlap as "persistent in the face of diversity and disappointment," the Associated Press reported at the time — Dunlap downplayed her role in remarks to the Pennsylvania Abandoned Mine Reclamation Conference last October as "a small part at the tail end."

"I’m not an attorney, an engineer, an economist, but what I do is I collaborate, and I put campaigns together, and I put teams together that are much smarter than I am and knowledgeable," she told the group.

Dunlap recalled her entry into the environmental movement at the Pennsylvania conference, telling attendees that while at Duke University, she had been inspired after reading Harry Caudill’s "Night Comes to the Cumberlands: A Biography of a Depressed Area."

"I was very disturbed by Duke Energy mining practices in Appalachia," Dunlap said. "I started meeting with citizens groups in Appalachia and in Pennsylvania and never got around to going to law school."

Instead, she turned her attention to SMCRA, working to secure the legislation from 1971 to 1977.

During that same period, Dunlap held posts with the National Parks Conservation Association and Friends of the Earth, where she focused on legislative issues including energy efficiency and climate.

Over the course of her career, Dunlap would also serve on the boards of the League of Conservation Voters, the Clean Water Fund, Scenic America, the Environmental Policy Institute and the National Clean Air Coalition, while continuing to press legislation like the 2006 SMCRA amendments.

Dawes recalled Dunlap’s role in securing the reauthorization of the Abandoned Mine Land program in late 2006, during a late-night, lame-duck session. When it passed in the middle of night, she phoned him immediately.

"She was in the Senate at that time, and I put in my notice to my colleagues that she couldn’t wait to tell me at 6 in the morning, she had to tell me right then," Dawes told E&E News. "Her relentless nature was such that, of course, she would have called me at 3:30 a.m."

He praised Dunlap for persuading lawmakers to include mandatory spending in that measure, ensuring Pennsylvania would receive funds without a trip before the Appropriations Committee.

Dunlap was working on the Abandoned Mine Land’s next reauthorization — the program is set to expire at the end of September — in the weeks before her death.

"She really cared about the citizens living in the coal fields, and that was her biggest passion, I think, was to protect them and to help them," said Citizens Coal Council Executive Director Aimee Erickson, who called Dunlap both a colleague and a close friend.

Erickson described Dunlap as indefatigable, recalling that she inspired those around her to keep going.

"She never wanted to be referred to as a mentor, even though she was. She wanted other people to get the recognition, not her," Erickson explained. "She would always do everything to encourage me and to support me and to keep moving forward."

Environmentalists who knew Dunlap, including Dawes, suggested that Congress could pay tribute to Dunlap by renaming the AML reauthorization in her honor.

The Interior Department highlighted Dunlap’s work in 2016, when the Office of Surface Mining Reclamation and Enforcement awarded her the Environment, Community, Humanity, Ownership Award (Greenwire, June 24, 2016).

"My team and I are deeply saddened by her passing. We have had the pleasure of working with her for years, as she was one of the most enthusiastic partners supporting our efforts to reclaim and revitalize former mining communities like those I represent in Northeastern Pennsylvania," Cartwright said in a statement to E&E News.

"Fervently dedicated to this work, she continued engaging with us and building support for our legislation up until her final days — fighting for this cause as she fought for her life," he said. "She will be deeply missed not only as an advocate, but as a friend as well."