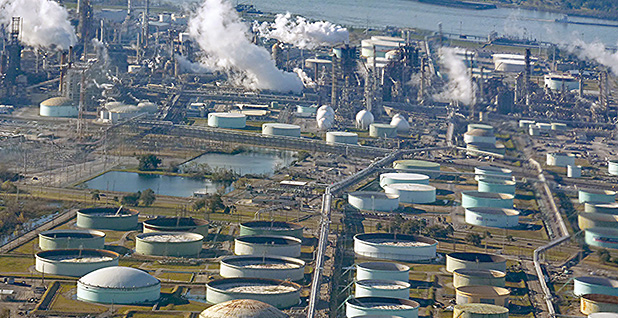 As states plan replacing coal with renewable energy and incentivizing electric vehicles, one Southern state is considering a different strategy to reduce its emissions.

Louisiana joined a growing list of states in committing last year to net-zero greenhouse gas emissions statewide by 2050, a pledge that aligns with President Biden’s targets (Climatewire, Aug. 20, 2020). Unlike in most states, however, heavy industry — especially from chemical manufacturing facilities and oil refineries — accounts for more than half of Louisiana’s greenhouse gas emissions and 72% of its total energy consumption, according to the U.S. Energy Information Administration.

That raises the question, can Louisiana get there? And can it be a model for slashing emissions from an industrial sector that traditionally has been a challenge to decarbonize?

Many industrial processes are powered by fossil fuels that cannot easily or cheaply be replaced with renewable alternatives. They often require large quantities of high-temperature heat from fossil power, and technologies that would drastically reduce these emissions are still under development, according to the International Energy Agency.

Yet some Louisiana officials and scientists say efforts to curb emissions in the Bayou State could create opportunities to advance carbon capture and sequestration (CCS) and carbon-free hydrogen, which are suitable for industrial sectors, according to multiple analyses, including a recent Princeton University study on federal climate policies (Energywire, Dec. 16, 2020).

While CCS and carbon-free hydrogen have faced cost barriers, many climate experts say those technologies will eventually be needed in some capacity to achieve net-zero emissions economywide within 30 years.

"We have some challenges in Louisiana that are unique to Louisiana, but we have the opportunity to be a leader in this process," Tim Hardy, an environmental lawyer at the Baton Rouge-based law firm Breazeale, Sachse & Wilson LLP, said during a meeting in December of Louisiana’s new Climate Initiatives Task Force.

Established last year by Gov. John Bel Edwards (D), the Climate Initiatives Task Force includes environmental scientists, local and state government officials, representatives from the oil and gas industry, and others. The group began meeting in November and is working to identify initial strategies to reduce greenhouse gas emissions in one of the most vulnerable states to rising seas. It’s set to deliver an interim report to the governor today on its efforts so far.

Although CCS has been a focal point during some task force meetings, it’s also emerged as a point of contention. Some environmentalists see it as a flawed solution to the state’s pollution problems, which disproportionately affect low-income communities and people of color. The state should instead stop giving out permits for new industrial facilities, they say.

"Environmental justice communities are often skeptical of CCS because they see that as a way of taking carbon emissions down without improving public health and getting any of the co-benefits," said Rob Verchick, chair of environmental law at Loyola University, New Orleans, and a member of the task force. "I think that’s a really big area of tension."

‘The art of the possible’

Although the task force hasn’t released any official recommendations yet for reducing emissions, state officials are seeking authority from EPA to regulate the injection and storage of carbon dioxide within state boundaries.

This would "streamline" permitting and regulation for CCS projects, said Patrick Courreges, spokesperson for the Louisiana Department of Natural Resources. Wyoming and North Dakota are currently the only states that have primary authority in regulating CCS (Energywire, Sept. 8, 2020).

Louisiana is home to dozens of petrochemical plants and oil refineries that release CO2 through a process known as steam methane reformation, which is used to produce hydrogen gas. The CO2 could be captured and stored underground in porous saline reservoirs, depleted oil and gas wells, or nearby oil fields for enhanced oil recovery, said Eric Smith, director of the Tulane Energy Institute and a member of the Climate Initiatives Task Force.

The hope is that refineries, petrochemical plants and related facilities — which are important sources of employment and tax revenue in Louisiana — could take advantage of federal tax credits and incentives to install carbon capture infrastructure and continue operating with scaled-back emissions, Smith said.

"We’re looking at and making recommendations to the governor over a period of about a year on what’s the art of the possible: What can you do to reduce CO2 without wrecking the economy?" Smith said.

Another factor that boosts CCS prospects in Louisiana is the fact that industrial facilities are in relatively close proximity to one another, according to analysts.

"This creates a comparative advantage for Louisiana in the realm of carbon capture, removal, use and storage, because there are a number of industrial sectors where the costs of capturing CO2, relatively speaking, are low," said Brad Crabtree, director of the Carbon Capture Coalition. "If you have multiple facilities in a single location, they can share infrastructure."

The state is rich in underground porous reservoirs and similar formations in which CO2 could be injected, according to Courreges of the Department of Natural Resources. Many of these geological formations are overlayed with impermeable layers of clay and shale that could trap the CO2 in place, he said.

Eventually, along with CCS to create low-carbon hydrogen, refineries and petrochemical plants may be able to use "green" hydrogen, where carbon-free electricity — rather than natural gas — would be used to produce the gas, said Smith.

"We [could] take the nuclear power plants’ power, which is CO2-free, and use it in the process of electrolysis to create green hydrogen," Smith said.

Carbon-free hydrogen is currently more expensive than hydrogen produced using fossil fuels. But it could be cost competitive within the decade, according to some projections.

Although environmentalists in the state have praised Edwards’ recent commitment to net-zero emissions, some are skeptical about whether Louisiana can become carbon-neutral without scaling back heavy industry.

Building out CCS infrastructure could take years, and in the meantime, the petrochemicals, oil-refining and plastics industries could see continued growth. A study from January 2020 found that new and planned projects in the Gulf Coast could increase greenhouse gas emissions every year by more than 500 million tons — equivalent to the annual emissions of 128 coal-fired power plants (Energywire, Jan. 15, 2020).

The coronavirus pandemic has stalled some of those proposed projects, but some could be built in the coming years, which could throw a wrench in the state’s emissions reduction goals, said Scott Eustis, community science director at the conservation organization Healthy Gulf. A proposed petrochemicals plant from Formosa Plastics Corp. in St. James Parish, La., for example, would pump out 13 million tons of carbon emissions per year, equivalent to the annual emissions of 2.6 million cars, according to the Center for Biological Diversity.

The benefits of these facilities for nearby residents are minimal at best, Eustis said. In a corridor along the Mississippi River known as "cancer alley," where many facilities are located, elevated health problems have been documented among the area’s predominantly Black and low-income residents, Eustis said.

If the task force and state leaders embrace CCS as a carbon-cutting tool, it could also come with a trade-off for coastal resilience, said Verchick of Loyola University. Building a vast network of pipelines to store carbon in Louisiana — which has lost over 2,000 square miles of land from climate-intensified coastal erosion since the 1930s — has the potential to affect vulnerable wetlands as well as communities that live near them, Verchick said.

"Pipelines are controversial. They tend to be placed in poor areas or areas of color, particularly in the Gulf, and you’re building a new kind of infrastructure which is not pretty to be around," he said.

The climate task force would be remiss to deprioritize public health and climate justice in its emissions reductions strategy, said Jane Patton, a senior campaigner in Louisiana at the Center for International Environmental Law. Moreover, relying on CCS to solve Louisiana’s climate problems could "perpetuate" the use of fossil fuels in the state’s heavy industries that are harming public health, Patton said.

"It’s clear that what we need to be doing is managing a decline of fossil fuels," she said. "That includes oil and gas, and that includes petrochemicals. I just don’t see that being the prominent part of the agenda it needs to be for this [climate] task force."