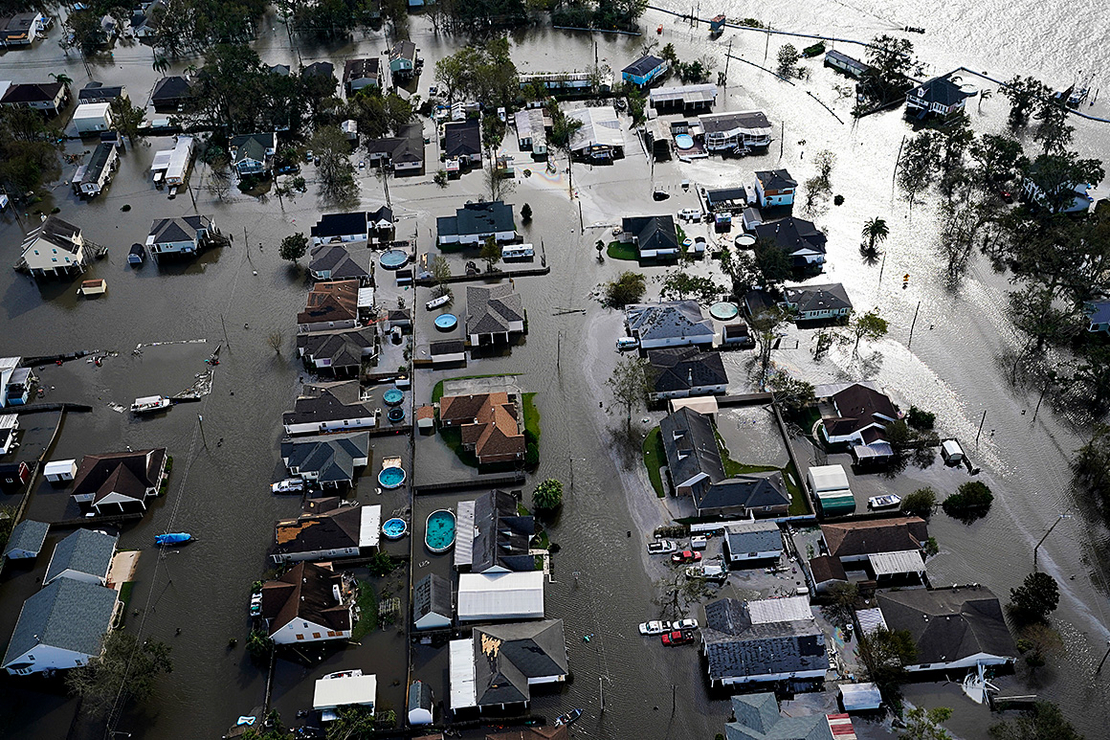 Homes were flooded in the aftermath of Hurricane Ida in Louisiana in August 2021. AP Photo/David J. Phillip

The Louisiana Climate Action Plan includes 84 recommendations to help the state reach its goal of net-zero greenhouse gas emissions economywide by 2050. The recommendations were sent yesterday to Gov. John Bel Edwards (D), who created the task force in 2020 through an executive order.

Louisiana’s plan is noteworthy given the state’s position as a top natural gas producer and a hub for oil refining, as well as its location in the South. The Bayou State is the only one in the South other than North Carolina to have set a 100 percent carbon neutrality or carbon reduction goal, according to the Clean Energy States Alliance, and the plan suggests that Louisiana could also establish a “clean or renewable” standard for electric utilities.

Still, the plan’s proposals aren’t enforceable or final, and it’s not clear which specific policies might be implemented, or how. The task force, whose members range from oil and gas industry representatives to environmental justice advocates, will meet again next month to “move forward with the plan’s implementation,” according to a press release from Bel Edwards’ office.

In addition to calling for 100% renewable or clean electricity by 2035, the plan recommends all state-owned cars and heavy-duty trucks be converted to zero-emissions vehicles and fuels by 2050. It also recommends the establishment of a greenhouse gas monitoring program, as well as the creation of a “net zero industry standard” to encourage decarbonization of heavy industry and industrial processes.

Noting the diversity of perspectives that made up the panel, Edwards said he looked forward to working with the group toward implementing the recommendations.

“[The task force] confronted a difficult issue with immense implications for our state with dedication, commitment, and integrity. While creating consensus around these strategies was not always easy, they ultimately chose action over inaction,” Bel Edwards said in a statement.

Considered one of the most vulnerable states in the country to sea-level rise and other consequences of climate change, Louisiana is also the third-biggest natural gas producer in the U.S. It ranks fifth among U.S. states in carbon dioxide emissions, more than half of which come from heavy industries such as chemical manufacturing and oil refineries, according to the U.S. Energy Information Administration.

While the task force unanimously approved the climate plan, some members opposed specific items in it. Environmental justice advocates, for example, voiced concerns over policies to incentivize carbon capture at industrial facilities.

“Efficiency enhancements through advancements in technology will be critical to reaching industry’s net zero goals. The market (specifically profitability and the will of shareholders) is the most powerful driver for efficiency across industry, as opposed to mandates,” Tyler Gray wrote in his dissent on that item, on behalf of the association.

Entergy Louisiana, the state’s largest utility, opposed a proposal to “explore the role of power purchase agreements” in advancing renewable energy as well as the possibility of deregulating the state’s electricity market.

“Outside of those specific dissents, I do not support each action item … but I do believe that they appropriately direct further discussion and debate to appropriate entities that should address those issues, mainly the Louisiana Public Service Commission and the Louisiana Legislature,” Jonathan Bourg, director of resource planning and market operations at Entergy Louisiana, said during the task force’s meeting this week.

While some of the policies included in the plan could be developed through executive action, one key player not involved in the task force meetings was a representative from Louisiana’s Republican-controlled Legislature.

In addition, the plan doesn’t include specific directives for the Legislature or the Public Service Commission, said Jane Patton, the New Orleans-based plastics and petrochemicals campaign manager at the Center for International Environmental Law.

Some steps in the plan would also “need the force of law” to be fully enacted, Patton said.

“The climate task force does have a legal advisory group that is headed up by a set of lawyers and that has provided advice on the legal and regulatory implementation of this plan, and I hope they’ll continue in some way to provide that advice,” said Patton, who is not a member of the task force.

Since the creation of the task force, state officials have been eyeing carbon capture technologies as well as green hydrogen to help reduce emissions from heavy industry, an objective reflected in the climate plan. Still, the issue has emerged as a point of contention among task force members (Energywire, Feb. 1, 2021).

Colette Pichon Battle, co-executive director of the Gulf Coast Center for Law and Policy, expressed some disappointment in the final plan, which she said could have been more ambitious. She opposed several action items included in the final version relating to carbon capture and the use of alternative fuels such as low-carbon hydrogen, over concerns that they could “perpetuate” fossil fuel consumption and environmental pollution in disadvantaged communities.

“This is definitely a step forward,” she said during the task force meeting. “In my opinion, it is a small, tiny, little, itty-bitty step forward, and I want to acknowledge that a step forward builds momentum.”

With the recommendations in place, a top priority now is for the Louisiana Public Service Commission to adopt a clean or renewable energy standard, said Rob Verchick, a law professor at Loyola University and a member of the task force. Developers have already shown interest in offshore wind off the Louisiana Gulf Coast, and a clean energy standard would show that the state is open to more renewable energy development, he said.

Still, members of the task force for the most part aren’t sure “what to make of” the plan, even though it represents a historic step for the state, said Verchick, who is also president of the Center for Progressive Reform.