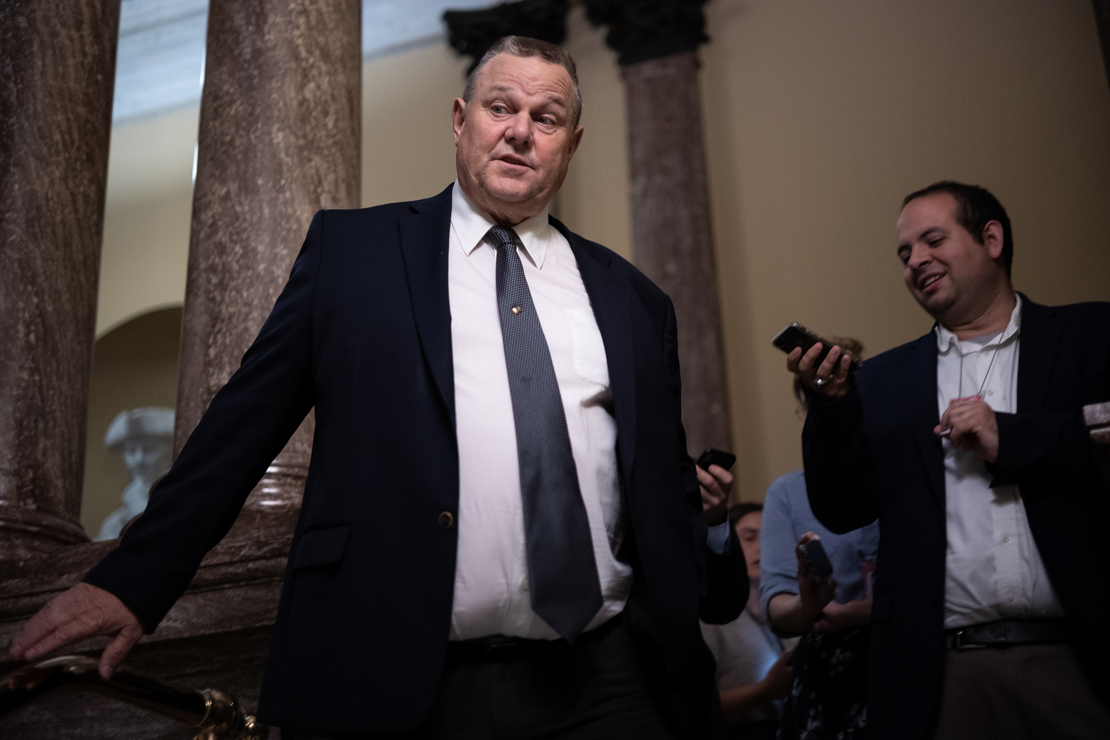 The national average is now $3.69 per gallon, according to the Energy Information Administration, a significant decline compared to June, when prices soared above $5 per gallon in the months following the Russian invasion of Ukraine.

“You see signs that gas prices are down; inflation looks more manageable every day. That’s good news for people, and ultimately, if that makes them feel better about the president and president’s party, then so be it,” said Sen. Chris Murphy (D-Conn.).

Republicans had anticipated using historically high energy prices as a major election talking point in their attempt to retake Congress. The GOP is still campaigning on energy and against the Democrats’ climate policies, but their message won’t carry as much weight.

The GOP still has the upper hand when it comes to overall consumer prices, however. Inflation rose higher than expected in August, prompting a stock sell-off Tuesday.

“These numbers are staggering,” Sen. John Thune (R-S.D.), the Senate’s minority whip, told reporters following the inflation report. “And the White House seems to be in absolute denial of the impact this is having on the American people and their budgets.”

Sen. Kevin Cramer (R-N.D.) acknowledged that gas prices might not have the same power in the midterms that they would have otherwise had, but they will still be on voters’ minds, he predicted.

“It’ll maybe have a modest impact, in that sense that it won’t be as bad as it could have been if gas remained at six bucks or five bucks or something,” he said. “But the fact remains that inflation and everything continues to be high.”

Many election forecasters now see the Democrats as the favorite, or even odds, to keep the Senate majority. Republicans are still likely to take the House, but earlier prognostications of a red wave have been whittled down in recent months.

Gas prices aren’t the only factor boosting Democrats’ fortunes. The Supreme Court’s June ruling overturning Roe v. Wade has helped Democrats, as have Biden’s growing approval rating and a string of legislative and executive wins, like the Inflation Reduction Act.

On the whole, Democratic lawmakers are happy to see lower prices — but they’re cautious about linking them to the midterms.

“There are lots of challenges people are facing, but there’s no doubt that the price of gasoline is going down, and that eases pocketbook pressures,” said Sen. Chris Van Hollen (D-Md.).

Both parties have tried to influence gas prices, but any claims of credit for the decreases are murky at best. Biden ordered the release of 180 million barrels of oil from the Strategic Petroleum Reserve over the course of about six months. Democrats tried but failed to pass measures like curbs on alleged price gouging and a windfall profits tax on oil companies. Republicans pushed doomed-to-fail increases on oil production on federal lands and offshore.

But Republicans are still optimistic that they can take majorities in both chambers. They point out that even after gas prices have fallen, they’re still much higher than when Biden took office — a fact that is also attributable to Russia’s war on Ukraine and recovery from Covid-19, among other factors.

“Back in my state, they’re still well above $2.38 a gallon they were when President Biden took office,” said Sen. Todd Young (R-Ind.). “That’s how we should be judged, and most Americans understand that that’s the appropriate scorecard for the administration.”

Sen. Rick Scott (R-Fla.), who chairs the National Republican Senatorial Committee, said gas prices are “still up from when Biden got elected” — and voters will punish Democrats for that.

Democrats insists they are the one with the answers on high prices, not Republicans.

“Unlike Republicans, Democrats have worked to lower prices on everything from prescription drugs to gas prices,” said Tommy Garcia, a spokesperson for the Democratic Congressional Campaign Committee. “While Democrats fight for solutions, Republicans have only sought to exploit the challenges everyday Americans face in hopes that it would win them power.”

Others in the Democratic Party say that many of the voters who may have been angry enough to vote Democrats out over gas prices are likely less motivated.

“The Republicans overplayed their hand on gas prices to distract from not having a serious plan to help working people,” said Jake McCook, a Democratic consultant based in New Mexico.

“Instead of putting forth serious policies to help working people in their time of need, Republicans simply exploit crisis after crisis to further their own political interests,” he continued.

Dale Butland, an Ohio-based Democratic consultant, said falling gas prices have enabled Democrats to talk more about the questions they think they do better with — such as abortion rights and the threat they say Republicans and former President Donald Trump could present to elections if they change policies to give the GOP an advantage in future races.

“High gas prices have lost their salience as an issue,” he said.

Butland pointed to an NBC News poll last month that found “threats to democracy” had eclipsed the cost of living as the top issue among midterm voters.

“We usually like to say, ‘It’s the economy, stupid.’ And it usually is,” Butland continued, quoting strategist James Carville. “In this case, I think it’s become ‘It’s our democracy, stupid.’ And so I think to the extent [we] put freedom and democracy on the ballot, we’ve got a real shot.”

Butland warned, however, that prices — and Democrats’ fortunes — could turn around quickly.

“I caution all of my Democratic friends not to count our chickens before they hatch. Because just as things turned quickly against Republicans, we still have almost two months before the election.”