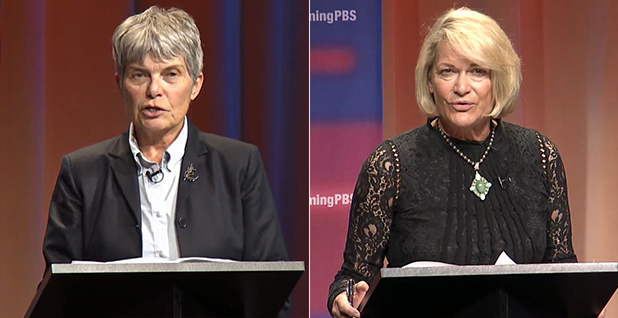 Former Wyoming Republican Rep. Cynthia Lummis, who is running for Senate, yesterday dodged a question about climate change’s impact on wildfires in the West.

Wyoming is currently dealing with the Mullen Fire, which has consumed more than 170,000 acres and still is not contained.

In a debate last night, Lummis was asked how she would address wildfires as climate change worsens their severity.

In response, Lummis advocated for conservation logging as a means of removing fuel for fires, saying that "these devastating fires are hurting our air quality much worse than climate change."

"If we had policies at the federal level for our forests like we do our state forests, we would have healthier forests that can better resist fire and better resist disease," Lummis said.

Lummis is the front-runner against career scientist and Democratic candidate Merav Ben-David, who won a competitive Democratic primary with about 40% of the vote.

Ben-David addressed climate change directly in her response to the same question. "We definitely need to mitigate climate, and we need to do it now and effectively," Ben-David said.

A Democratic candidate has not won a Wyoming Senate seat in 50 years, but Ben-David has attacked Lummis as a "career politician" looking to add the title of senator to her long political resume that began in the Wyoming Legislature.

"You know how scientists get stuff done? We know the facts, we embrace the facts, we listen. We don’t have time for partisan politics and neither do [voters,]" Ben-David said.

During a debate that included questions on immigration, racial justice and the economy, the candidates were also asked about whether they supported carbon sequestration policies.

Lummis is supportive of carbon capture technology and called for "multiple sources of energy" in her response. She also said she supported research to extract "as much oil from these legacy fields as we can."

Ben-David called the idea of carbon sequestration "inefficient" for coal plants and said the focus needed to be on alternative energy sources such as thorium-based nuclear reactors.

Ben-David, an ecology professor at the University of Wyoming, brought up the climate repeatedly during the debate, saying she would work to get the United States back into the Paris climate deal.

She also expressed concerns about environmental justice and climate refugees, saying many people seeking asylum in the United States are already leaving their home countries because of repercussions from a warming planet.

"We are going to see large human migrations across the globe unless we address climate change," Ben-David said. "You can’t lead the world by abandoning it."

Lummis is a former chair of the House Science, Space and Technology Subcommittee on Energy. She has been a vocal proponent of the fossil fuel industry, the main economic engine for the nation’s least populous state.

A fiscal conservative, Lummis said she supported consolidating environmental agencies across the executive branch to pay for infrastructure projects that would benefit Wyoming’s energy industry.

Lummis has been endorsed by Wyoming’s current and outgoing senators, John Barrasso and Mike Enzi, respectively, as well as President Trump.