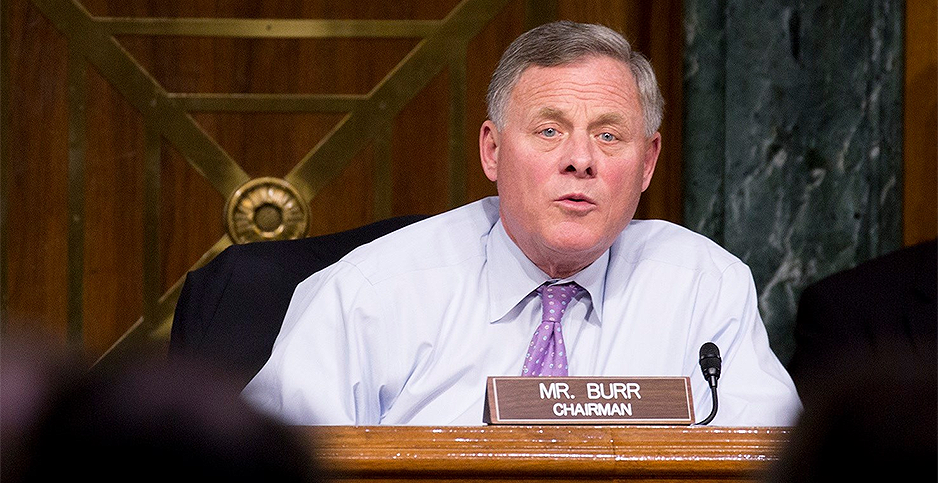 Sen. Richard Burr (R-N.C.), under investigation for stock transactions, has stepped aside as chairman of the Senate Intelligence Committee. He has been an ardent supporter of the Land and Water Conservation Fund. Burr/Facebook

With a commitment from Senate Majority Leader Mitch McConnell (R-Ky.) and President Trump to ensure permanent funding for a popular conservation program this year, bipartisan legislation could soon become law.

It should be a relatively easy path at this stage, given those GOP leadership promises; bipartisan support for S. 3422, the "Great American Outdoors Act," in the Senate; and a Democratic-controlled House that embraces conservation policies.

But what happens if Congress falls short of the mark in a year that has so far been dominated by the COVID-19 pandemic and faces a time crunch caused by the 2020 elections?

A divided Congress — in which Republicans control the Senate and Democrats control the House — might seem like a more difficult environment to secure the legislation, but some observers worry that a change in power could mean the Land and Water Conservation Fund and parks maintenance backlog are sidelined in favor of big-ticket items like health care.

"There’s these things called policy windows that open and then they close. They could close for a decade or for a year," Outdoor Recreation Roundtable Executive Director Jessica Wahl Turner told E&E News.

Other backers of the legislation, speaking on background to discuss the issue freely, likewise acknowledge an urgency to pass it sooner rather than later.

There is less than eight months left in the 116th Congress — a relative pittance of work weeks in a standard presidential election year, much less one turned upside-down by a pandemic.

Among the hurdles the "Great American Outdoors Act" could face if it is delayed for consideration until next year is the question of who among Republican lawmakers would serve as its champion.

Katie Schoettler, spokeswoman for co-sponsor Sen. Steve Daines (R-Mont.), said in a statement, "Senator Daines is committed to getting this conservation win done for the people of Montana."

Party leaders see movement on LWCF as a winning issue for both in the campaign trail. The president credited Gardner and Daines in his March tweet supporting full and permanent LWCF funding (E&E Daily, March 4).

In the event neither returns to Congress next year, there would be 13 Republicans who currently co-sponsor the legislation to take up the work.

Among those co-sponsors, however, are Tennessee Sen. Lamar Alexander, who has already announced his retirement, and North Carolina Sen. Richard Burr, who is enmeshed in a federal inquiry into his stock trades.

Burr stepped aside as chairman of the Senate Intelligence Committee as a result. Sen. Marco Rubio (R-Fla.) is taking over the role.

Other Republicans backing the LWCF legislation include South Carolina Sen. Lindsey Graham, who co-chairs the Roosevelt Conservation Caucus, and Ohio Sen. Rob Portman, who will be up for reelection next cycle.

Asked whether Portman might take on that leadership role if the legislation failed to move in coming months, Portman spokesman Kevin Smith said, "Senator Portman is working with Senators Gardner, Daines and his bipartisan colleagues to pass the bill this year."

‘Across the finish line’

The LWCF relies on proceeds from offshore oil and gas drilling to fund grants for states to preserve and maintain parks, forests, recreation areas and cultural sites. The program is also used to acquire land and water for the federal estate.

Wahl Turner added that she remains optimistic that the legislation will be taken up in the Senate this cycle, potentially as a stand-alone bill.

"This bill has stayed top of mind because this crisis is one that makes us think about how we get outside, how we stay healthy, how we help rural communities," she said.

New Mexico Sen. Martin Heinrich (D), an outspoken advocate of the legislation, appeared cautiously hopeful for a near-term vote Friday, a day after saying the measure was on the "verge" of enactment (E&E Daily, May 15).

"I’ve had conversations as recently as [Thursday] with Republican colleagues, suggesting that we may see this on the floor in the coming weeks scheduled by Leader McConnell," Heinrich said Friday during a press call with professional athletes and recreational industry advocates.

"I just think we’re in a good place, and if the American people continue to demand this, I think we’re going to get it across the finish line," Heinrich said.

But as he touted his confidence in the bill, Heinrich acknowledged the timeline for a vote is in flux as Congress deals with the economic fallout from COVID-19.

"It could happen very quickly, or it could happen several months from now, but none of the indicators suggest that it’s not going to happen," he said, adding that no decision has been made on whether to pass the bill on its own or as part of an economic stimulus package.

More than 100 lawmakers unsuccessfully pressed their leadership to include the Senate measure in the chamber’s recently approved pandemic aid package (E&E Daily, May 12).

"No issue has greater bipartisan appeal than conservation. We saw evidence of that a year ago, when Congress united to pass the [Dingell Conservation, Management and Recreation Act], the most important conservation legislation in a decade, in a veto-proof vote of 92-8 in the Senate and 363-62 in the House," noted Backcountry Hunters and Anglers President and CEO Land Tawney.

Tawney pointed to momentum the "Great American Outdoors Act" had claimed ahead of the pandemic to suggest it will move before Congress ends its current session.

"As we as a society struggle to recover from the pandemic, the ‘Great American Outdoors Act’ provides critical resources to assist in that recovery, all while focusing on the values that are central to who we are as Americans — conservation of important landscapes and opportunities to access and enjoy our public lands and waters," Tawney said.