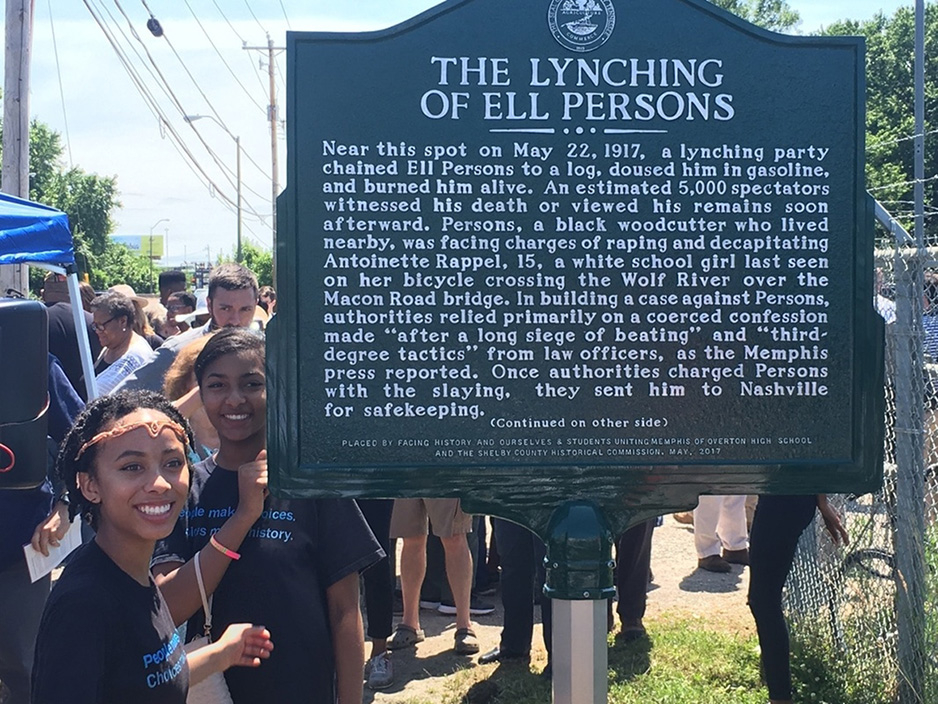 A marker about the lynching of Ell Persons in Memphis in 1917. Persons, a Black woodcutter, was beaten into confessing to raping and killing a 16-year-old white girl. Colonelinfo/Wikimedia

In the spring of 1917 a crowd of 3,000 people gathered to watch in Memphis as a lynch mob burned and decapitated Ell Persons, a Black man who was awaiting trial after he was beaten into confessing to raping and killing a 16-year-old white girl.

Under a bill introduced by Rep. Steve Cohen (D-Tenn.), the site near the Wolf River and others near the city in Tennessee would be studied as possible additions to the National Park Service.

“Unfortunately, there are many examples of lynching violence in our country’s history,” Cohen said. “Including these sites as part of our national park system is an important step to remember the victims and to learn from the past so that it is never repeated.”

The bill would direct the Interior secretary, who oversees the park service, to study whether lynching sites within roughly 100 miles of Memphis should be added as new park sites.

“We believe the report that will come from this act will help our region openly face its history of racial violence so that we can heal and grow,” said Rich Watkins, board president of the Lynching Sites Project of Memphis, who endorsed Cohen’s bill.

A separate effort is already underway to create a national park site that would be named in honor of another lynching victim, Emmett Till, a 14-year-old Black teenager from Chicago who was tortured and killed in August 1955 after he allegedly whistled at a white woman at a grocery store in Mississippi (Greenwire, Jan. 21).

Till’s murder in the Mississippi Delta helped ignite the civil rights movement when his mother, Mamie Till-Mobley, opted for an open-casket funeral to put the boy’s mutilated body on display at Roberts Temple Church of God in Christ in Chicago.

As part of the work, NPS is conducting a special resource study of civil rights sites in Mississippi that could be included in a new park site. Interior Secretary Deb Haaland went to the state in February, meeting with Till’s cousin and visiting Bryant’s Grocery in Money, Miss.

Cohen’s bill, H.R. 7912, is named after Persons, called the “Evaluating Lynching Locations (ELL) for National Park Sites Act.” Cohen, who introduced the legislation on May 31, is a member of the House Natural Resources Committee, which has jurisdiction over national parks.

A historical plaque marks the spot where Persons, a Black woodcutter, was chained to a log, doused in gasoline and burned alive on May 22, 1917. News accounts described the lynching as “a holiday atmosphere,” with vendors selling drinks and snacks as cars jammed Macon Road to watch.

Later in the day, Persons’ head and foot were dumped on Beale Street in Memphis for Black pedestrians to see, according to an inscription on the plaque.

No one was ever brought to trial in connection with the killing.