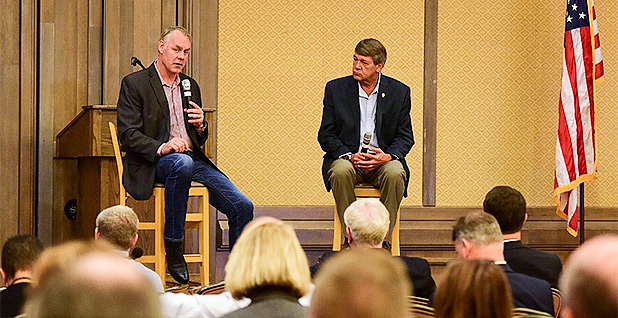 Don’t bother keeping it short. And maybe include a few maps.

Among the dozens of congressional lawmakers who fired off missives to Zinke last year in an attempt to influence the outcome of his agency’s review of national monuments, most received rote responses:

"I appreciate having your views on the review."

"You may be assured I will keep your views in mind as the review proceeds."

"I greatly appreciate your detailed comments."

The missive was included among the thousands of pages of unredacted internal emails that Interior released last week in response to Freedom of Information Act requests.

Because of a clerical error, the documents were released without any redactions to requesters including the Center for Western Priorities, which provided the emails to E&E News (Greenwire, July 24).

The documents included Bowman’s roundup of congressional letters to Zinke as of mid-June 2017 and a list of recommended responses. Each began with the phrase: "Thank you for your letter of [date]."

"I greatly appreciate your wise counsel throughout the National Monument process. I will continue to be in close touch with you as we go forward," the draft reply states.

But Cook, who submitted a 25-page letter addressing four national monuments in the Golden State, received the only substantive critique.

The proposed text continues: "I will [be] in touch with you on this as we go forward?" Then it says: "Note — highly detailed, well-reasoned proposals for revisions to boundaries, including an expansion, and on a management plan; seems someone should talk to him about these."

Neither the Interior Department nor Cook responded to requests for comment yesterday.

In his letter to Zinke, Cook echoed the secretary’s own avowed stance on conservation, saying that environmental protections should not prevent multiple use of landscapes.

"In addition to being a conservationist, I’m also a strong proponent of the philosophy that public lands should be managed with multiple uses in mind," Cook wrote.

"It is becoming increasingly apparent that federal policies implemented over the last decade have favored a myopic environmentalism at the expense of economic and recreational activities. Anything that you can do to restore this balance would be of a tremendous benefit to my district."

Whether the duo ultimately met to discuss the monument review remains unclear, although one of Cook’s recommendations — to allow hunting in the Castle Mountains National Monument — was included in a final report Zinke released publicly in December (E&E News PM, Dec. 5, 2017).

"The review process uncovered inadequate coordination with the sportsmen community, particularly where monument designations were assigned management by the NPS [National Park Service], which are closed to hunting due to NPS regulations that implement its enabling statutes. One example is the Castle Mountains National Monument," Zinke wrote in his report.

Zinke also seized on Cook’s request not to alter the Sand to Snow National Monument, making the site one of only six to be dismissed from review before a deadline to submit recommendations to the White House.