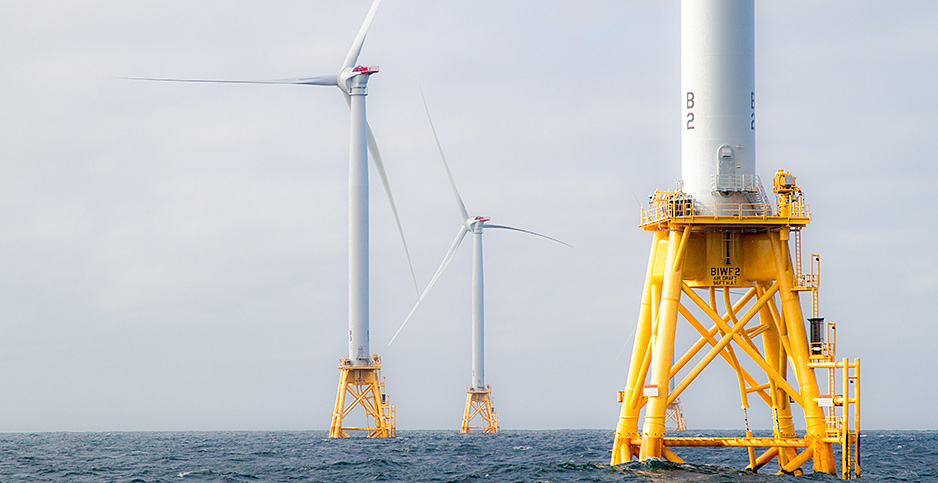 The Block Island Wind Farm off the coast of Rhode Island, pictured here, was the first offshore wind farm in the United States. Gary Norton/NREL

The ban approved by Mills, a Democrat who supports offshore wind, is the first of its kind in the United States, where fishermen have been among the most strenuous objectors to the developing industry.

Maine fishermen produce the lion’s share of lobster in the country. But Mills has argued that wind and fishing can coexist, just in more distant federal waters.

"Maine is uniquely prepared to grow a strong offshore wind industry, create good-paying trades and technology jobs around the state, and reduce our crippling dependence on harmful fossil fuels," she said in a statement yesterday.

She added: "This legislation cements in law our belief that these efforts should occur in Federal waters farther off our coast."

Northeast states have largely supported the potential to raise an offshore wind sector to power local communities. State leaders also want to capture the economic activity from years of construction, port expansions and long-term jobs in maintenance and service.

That offshore wind momentum has picked up significantly this year with the Biden administration’s commitment to speedily advance offshore wind in the country. The nascent clean energy sector is a critical component of President Biden’s ambition to decarbonize the U.S. grid by 2035.

But the Maine ban is a concession to critics who argue wind farms disrupt fishing grounds.

Mills first proposed a 10-year moratorium on offshore wind in state waters. But fishing interests in the state rallied for something permanent.

Faulkingham said he and other fishermen had feared Maine would follow in the footsteps of other states, where fishermen were consulted after wind developers had already made several decisions about their projects.

"We are going to know what’s happening ahead of time rather than placing windmills first and asking questions later," he said.

Wind blows hard off Maine’s coast, but the state is likely years behind the other Northeast wind developments in the queue because still-developing technology is necessary to float turbines in the deep waters of the Gulf of Maine.

Developments in the Pacific Ocean along California’s coast will also need to rely on floating technology. They may have help from Maine scientists in that regard.

The University of Maine is collaborating with New England Aqua Ventus LLC to launch an 11-megawatt floating pilot project off Monhegan Island. The two-turbine pilot will have no restrictions on fishing.

"Offshore wind will be key to powering the Northeast’s future clean energy economy, and we are confident that it will coexist with our region’s vibrant natural ecosystems," said Peter Rothstein, president of the Northeast Clean Energy Council.

But Patrice McCarron, executive director of the Maine Lobstermen’s Association, said many fishermen still have reservations.

McCarron said lawmakers engaged with fishing concerns, and the final bill contained several safeguards to keep fishing groups involved in offshore wind decisions. But she was unconvinced that offshore wind power should have a place in Maine waters.

"Fishermen spend much of their lives at sea and understand that industrializing the ocean with 800-foot floating turbines will harm the marine environment," she said in an email.