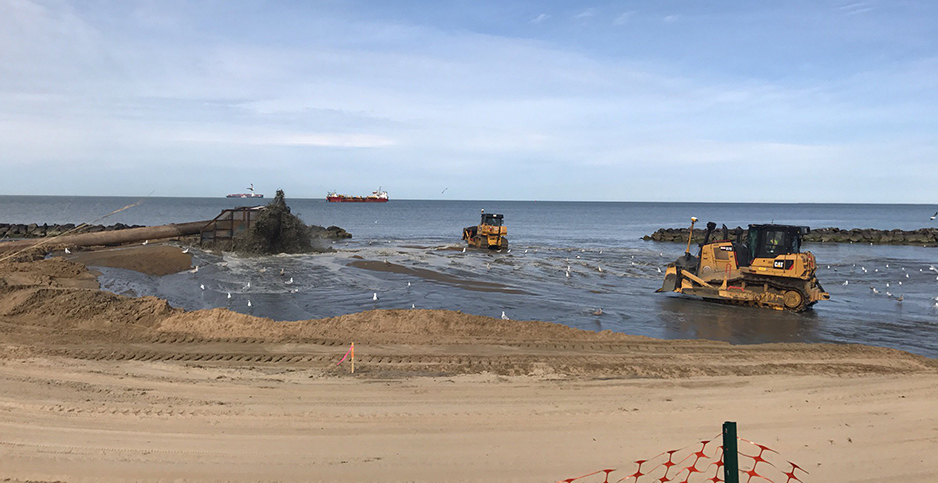 Federal scientists have now tallied the pluses and minuses of coastal barrier beach nourishment. The next calculation is up to Biden administration political appointees, and it could come soon.

In a comprehensive report requested two years ago by a top lawmaker and completed earlier this month, U.S. Geological Survey and Fish and Wildlife Service scientists dug into the myriad impacts of sediment removal and placement within barrier islands.

"The study identifies both beneficial and detrimental impacts from sediment management practices depending on where and how they are applied within barrier island systems," said Jennifer Miselis, USGS research geologist and lead author on the report.

Sediment management includes actions like beach nourishment, where sand is moved from one location and added to an area to expand beaches and dunes.

The solicitor opined that the prohibition does not apply to beach stabilization projects.

"The Trump administration is committed to protecting our coastlines and utilizing our available resources to restore, enhance or stabilize our beaches consistent with the law Congress wrote," Bernhardt wrote.

The lawsuit is now on hold while the Biden administration determines whether it will stick with the Trump interpretation or change course. Administration attorneys said in court filings they’re shooting for a decision by June 25.

When sediment is moved, it may lead to coastal erosion near the removal location and alter an island’s ability to withstand future storms, says the report.

Dredging can also alter the quality of seafloor habitats, such as beds of sea grass and fish nurseries.

On the plus side of the ledger, in addition to the short-term protection from coastal hazards that beach nourishment provides, it also increases nesting habitats for some coastal wildlife.

"By creating a wider beach, you create more foraging and nesting areas for several species, like shorebirds and turtles," Miselis said.

The Coastal Barrier Resources System consists of relatively undeveloped coastal barriers along the coasts of the Gulf of Mexico, Atlantic Ocean and Great Lakes that are depicted on a set of maps maintained by FWS.

Barrier islands play a key role in storm protection for coastal communities and infrastructure and serve as important habitats for many coastal and marine species.

The extensively footnoted 106-page study cautions that many questions remain unanswered, despite the extensive research that has been done.

"Sometimes short-term benefits can have unforeseen impacts that may affect the health of barrier islands and their ecological stability beyond the life of the sediment management project itself," Miselis said.

The study notes that "over time, placed sediment may be dispersed to other barrier island environments and may cause physical and ecological benefits, such as increased sediment supply to downdrift beaches and habitat extent."

But the study warns that "placement may also result in adverse effects, such as altered natural sediment exchanges between barrier island environments and reduced habitat suitability."

For instance, the report observes that "subtidal placement of sediments results in burial and mortality of sediment fauna and in increased turbidity and nutrient particulates that can affect nearby sensitive sessile fauna such as corals."

However, sediment placement in degraded marshes "may have a positive effect by increasing vegetation cover and faunal abundance."