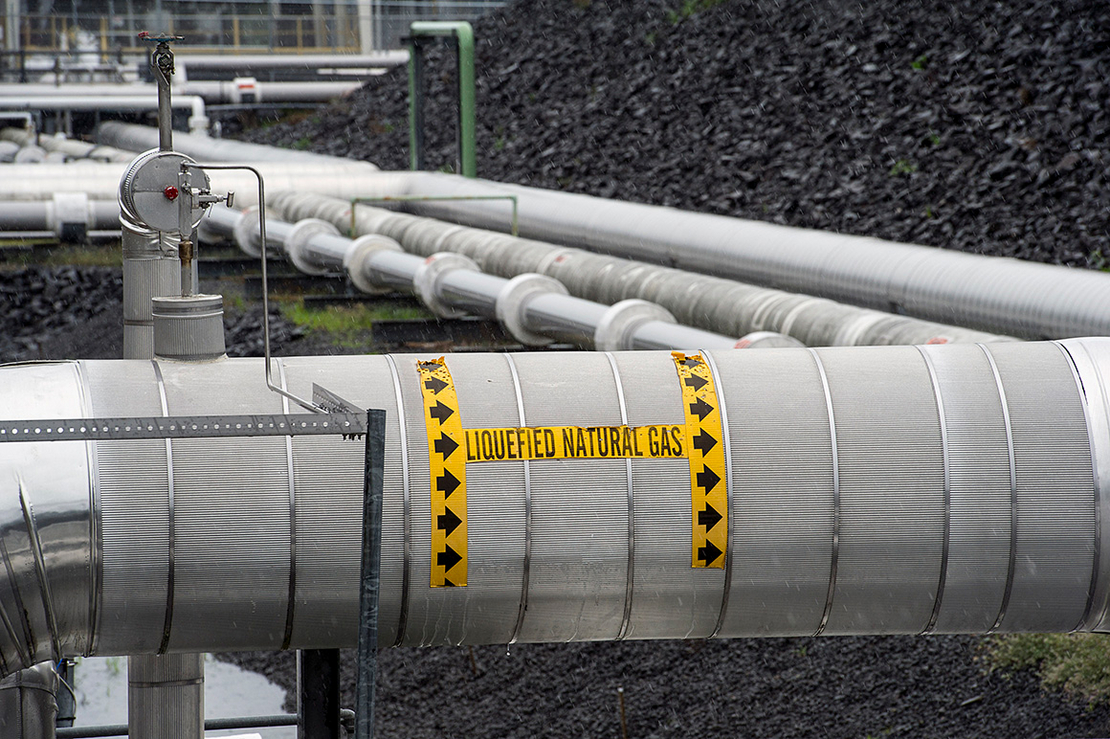 The Federal Energy Regulatory Commission is weighing proposals from several energy companies that could set a precedent for how the agency applies a bedrock environmental law to oversight of natural gas.

In three cases, project developers are asking FERC to declare that their proposals for liquefied natural gas facilities are outside the agency’s jurisdiction. If the independent agency grants the petitions, it could shake up federal LNG reviews at a time when the Biden administration is facing industry pressure to embrace U.S. exports of the fuel.

The petitions showcase what critics say is a major gap in how the U.S. government handles environmental reviews of gas projects under the National Environmental Policy Act.

“You could have a major environmental review process lacking for some of these projects, so we believe it’s important that FERC have jurisdiction over them,” said Tyson Slocum, director of the energy program at consumer watchdog group Public Citizen.

The National Environmental Policy Act fight stems in part from a Trump-era rule inked not at FERC but at the Department of Energy. Finalized in December — and so far upheld by the Biden administration — the rule exempts DOE from carrying out NEPA reviews for proposed new LNG export facilities through a “categorical exclusion” (Energywire, Dec. 4, 2020). The rule was designed to ensure that DOE does not “unnecessarily duplicate” FERC’s processes, the agency said at the time.

Critics, however, said the decision to defer to FERC overlooks the fact that the independent agency excludes a wide range of LNG facilities from its own NEPA oversight, meaning some projects could effectively slip through the cracks of federal review altogether.

“There’s a huge, gaping hole in the review of natural gas infrastructure,” said Tracy Carluccio, deputy director of the Delaware Riverkeeper Network. “There could be many projects that completely evade FERC reviews and NEPA reviews” depending on how the agency rules on the petitions.

The petitions come as FERC faces pressure on many fronts to strengthen its environmental oversight of gas projects while maintaining regulatory certainty for the energy industry. Last month, the U.S. Court of Appeals for the District of Columbia Circuit rebuked FERC for allegedly failing to assess the greenhouse gas and public health effects in its environmental reviews for two LNG projects (Energywire, Aug. 4). Meanwhile, Congress is weighing giving FERC and DOE additional funding to carry out “more efficient and more effective” NEPA reviews as part of a sweeping $3.5 trillion reconciliation package.

One of the proposals seeking to be declared outside FERC jurisdiction is a planned small-scale LNG project from Florida-based Nopetro LNG. In March, DOE concluded it’s exempt from that agency’s NEPA reviews because of the categorical exclusion rule.

The other two proposals were submitted to FERC last fall from subsidiaries of the liquefied natural gas company New Fortress Energy. They would export the liquefied fuel to countries with which the U.S. has a free trade agreement. Those types of projects are presumed exempt from a NEPA analysis at DOE, since the department is required under the Natural Gas Act to approve LNG exports to those countries “without modification or delay.”

New Fortress Energy and Nopetro did not respond to requests for comments. In their petitions, however, the argued that their projects are similar to other facilities over which FERC has previously declined to declare jurisdiction.

FERC does not face a firm deadline to act on the petitions.

What makes a ‘terminal’?

The Natural Gas Act gives FERC oversight of LNG terminals located onshore or in state waters that “receive, unload, store, transport, gasify, liquefy or process” natural gas that is exported abroad, imported or transported to other states by water. All U.S. LNG terminals must obtain FERC authorization before going into service, a process that involves an environmental review and chances for public input.

For years, the commission has maintained that LNG projects not connected to pipelines don’t fall under its jurisdiction. Similarly, facilities that process LNG must be directly linked to the point of export for FERC to consider them a “terminal.”

“This has led FERC to conclude that facilities that liquefy natural gas (or receive LNG) that is shipped via container to, by or from oceangoing vessels are not LNG terminals,” James Bowe, a partner at King & Spalding LLP, which has represented energy companies in FERC proceedings, said in an email.

Charlie Riedl, executive director of the Center for Liquefied Natural Gas, said LNG projects outside of FERC’s review processes are typically small-scale facilities deemed to be in the public interest. He pointed out the facilities must still comply with safety standards set by the Transportation Department, among other federal rules, even if they don’t go through evaluations under NEPA.

“I’m unaware of any operational projects that are somehow skirting this issue of necessary reviews,” said Riedl, whose organization represents large LNG companies. “If they’re operating within the provided guidelines to satisfy the requirements for safety, that’s each of those businesses’ prerogatives.”

Nonetheless, the three pending petitions could offer an avenue for FERC to reconsider how it regulates LNG.

The commission’s existing stance on which LNG projects fall under its jurisdiction was largely established in 2014. In an order that year, FERC granted a petition from Shell U.S. Gas & Power LLC to exempt a proposed LNG project from the agency’s oversight.

The majority of commissioners at the time found that projects generally needed to link up with interstate pipelines to be FERC-jurisdictional. Shell’s proposal did not directly connect to such a pipeline.

But this March, FERC Chairman Richard Glick and Commissioner Allison Clements suggested that they wanted to revisit that precedent. In a joint statement, the two Democrats wrote that the commission should reassess the types of LNG facilities that need FERC approval.

“[It] is time to reconsider our precedent in Shell U.S. Gas & Power, LLC (Shell), which held that a facility must be connected to a pipeline to be a jurisdictional LNG terminal. There is no such limitation in the plain language of the NGA,” the commissioners wrote, using an acronym for the Natural Gas Act.

That’s unlikely to happen this year, since the other two Republican commissioners at FERC seem to support the current position on the issue. But it could be on the table if President Biden’s nominee for the fifth slot at the agency, District of Columbia Public Service Commission Chair Willie Phillips, a Democrat, is confirmed by the Senate, legal experts said.

In Nopetro’s case, the company plans to build an LNG facility east of Panama City, Fla., that would receive natural gas through two pipelines. The gas would then be cooled to -260 degrees Fahrenheit to be transformed into its liquid state, loaded into specialized containers, and transported via truck to a dock located a quarter mile away, according to the company’s FERC petition.

From the dock, which is owned by a separate entity, the LNG would be sent to markets in the Caribbean, Central America and South America, the petition said.

“This natural gas will serve as a cleaner fuel substitute for the diesel fuel currently consumed throughout these countries,” Nopetro said in its filing.

It also noted that “the Commission has previously declined to exercise its NGA section 3 jurisdiction over such complementary facilities, and the circumstances do not warrant a different result here.”

The Bradford County facility, to be built in Pennsylvania, would receive natural gas from an interstate pipeline and send LNG via truck or rail to the related Delaware River facility in New Jersey. From there, the LNG would be exported to markets overseas.

“The facility is extensively regulated at the federal and state levels and there is no ‘regulatory gap’ that the Commission could seek to fill by extending its jurisdiction under the NGA outside of its historical contexts,” Bradford County Real Estate Partners said in its petition.

Environmental groups accused the developers of trying to take advantage of “loopholes” to avoid FERC approval — a process analysts say could become more challenging given Glick’s intent to account for the climate change impacts of natural gas infrastructure. New Fortress Energy’s two proposed facilities are also clearly connected, and should be viewed by the commission as one project, said Adam Carlesco, a staff attorney at Food & Water Watch.

“The argument is that because there is no gas pipeline crossing state lines, then FERC has no authority over the projects individually; despite all three aspects being meant to operate together and being funded by the same development company at the same time,” Carlesco said in an email.

Although analysts expect the Biden administration to overturn the Trump-era “categorical exclusion” rule for LNG, it remains in place for now.

So long as that’s the case, FERC should claim broader jurisdiction over a wider range of LNG facilities for public health and safety, said Fred Millar, a hazardous materials consultant who has worked with environmental groups. Of the more than 110 LNG projects nationwide, approximately 24 have been authorized by FERC, while the others are awaiting review from other federal agencies or state and local entities, according to independent agency.

But Millar said local entities lack the expertise to properly oversee the gas.

“FERC [oversight] would be useful because they do a NEPA analysis,” Millar said. “That would be very helpful if these facilities had to do a very thorough environmental impact statement under NEPA, because then they’d have to defend their nearness to populations and all other factors.”

Riedl of the Center for LNG questioned the need for conducting such an analysis for small projects. Whereas Nopetro’s planned LNG facility would export less than 51.75 billion cubic feet of LNG per year, some existing FERC-jurisdictional terminals export more than 10 times that amount.

In addition, the benefits of LNG exports cannot be overlooked, said Riedl, whose organization does not represent New Fortress Energy or Nopetro. The fuel offers an opportunity for countries without access to natural gas reserves to switch away from burning more carbon-intensive coal.

“There’s important nuance to understand when you look at the size and scale of these facilities,” Riedl said. “Regardless of how these facilities are built, what we do know is that they can be done safely.”

As for FERC’s precedent on LNG and whether the commission will “reassess” the broader issue, the agency declined to comment on the topic. It could be that the topic is sidelined until a third Democrat — Phillips — is confirmed by the Senate, said Joe Fagan, a partner at the Washington, D.C.-based law firm Day Pitney LLP.

Meanwhile, Glick has a host of other issues as his main priorities, including initiating reforms to electric transmission planning and to the natural gas pipeline approval process. So while the “potential” is there for FERC to change its precedent on LNG, it’s not clear if and when that would happen, Fagan said.

“Will [FERC] do so, with everything else on their plate? That’s an open question,” Fagan said in an email.