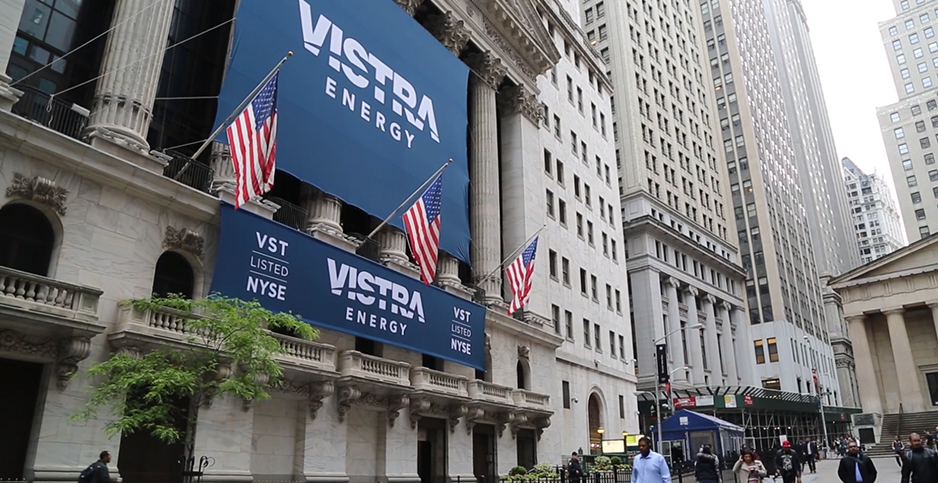 Vistra Energy Corp., a power producer and retailer based in oil-soaked Texas, said yesterday it plans to remove "energy" from its name while pushing toward a cleaner energy portfolio.

The name Vistra Corp. better reflects "who we are and where we are going as an organization," the company said in a statement to E&E News.

"Vistra is not the ‘energy’ of the past: The term ‘energy,’ in particular, encompasses a broad spectrum of energy businesses, products, and resources — and is most commonly used to refer to the petroleum/oil and gas sector, of which we are not a part," the company said.

The swipe at fossil fuels comes as Vistra continues to operate an extensive U.S. fleet of units powered by coal and natural gas. The company has moved to retire thousands of megawatts of coal-fueled generation while promoting the relatively cleaner nature of gas as well as investments in renewables and energy storage as it seeks to reduce greenhouse gas emissions.

Name or branding shifts are not uncommon in the corporate world, although they’ve had varying degrees of effectiveness over the years. Sometimes companies want to embrace an emerging trend or escape something that’s old, offensive or a flop.

Vistra’s existence sprang from parts of the former Energy Future Holdings Corp., which filed for bankruptcy in 2014. Before Energy Future, the company was known as TXU Corp., which stemmed from its historical name of Texas Utilities. In 2016, a news release said, "The name Vistra Energy captures the ‘vision’ of an energy company preparing for the future and the ‘tradition’ of an energy company whose lineage dates more than a century."

In another part of the energy world, St. Louis-based Arch Coal Inc. said in May that it was changing its name to Arch Resources Inc. to underscore a transition to being "a premier producer of metallurgical products" for the steel industry. Virginia-based Dominion Resources Inc. went the other way in 2017 and decided to become Dominion Energy Inc. The company said it wanted to recognize "its focus on the evolving energy marketplace" and to unify its brand after a merger.

Paul Patterson, an analyst with Glenrock Associates LLC, said name changes often are cosmetic. He said companies may suggest they’re more than just an undifferentiated commodity business, such as a transportation firm describing itself as being in logistics.

A branding shift also can happen when "something is perceived to fall out of favor," Patterson said, "and right now, fossil fuel might be falling out of favor … particularly if it’s perceived that the Democrats are in a position to win the White House and maybe even the Senate."

To pursue its name adjustment, Vistra filed a certificate of amendment with the Delaware secretary of state effective Thursday, according to a regulatory document posted online yesterday.

In its statement to E&E News, Vistra said it’s a provider of retail electricity with a generation segment that’s "comprised of primarily low-to-no carbon emitting generation assets, including solar, batteries, nuclear, and gas." A few small units were listed as being able to run on oil in a company presentation in May, along with a number of coal-fueled facilities.

"As we have done over the past several years, we expect to continue to transition our supply base away from fossil fuels and toward even more renewable and battery storage assets in the future," Vistra told E&E News.

In recent years, two of Vistra’s main business brands have been known as Luminant, which generates power, and TXU Energy, which is an electric retailer.

The company said yesterday that its "integrated business model" is less sensitive to commodity price changes than independent power producers have been in the past. That, Vistra said, reinforces "the appropriateness of decoupling from the ‘energy’ sector as a whole."

Still, one of Vistra’s rivals in the competitive power sector has a name — NRG Energy Inc. — that’s built on the word Vistra is shedding from its corporate title. NRG declined to comment yesterday.