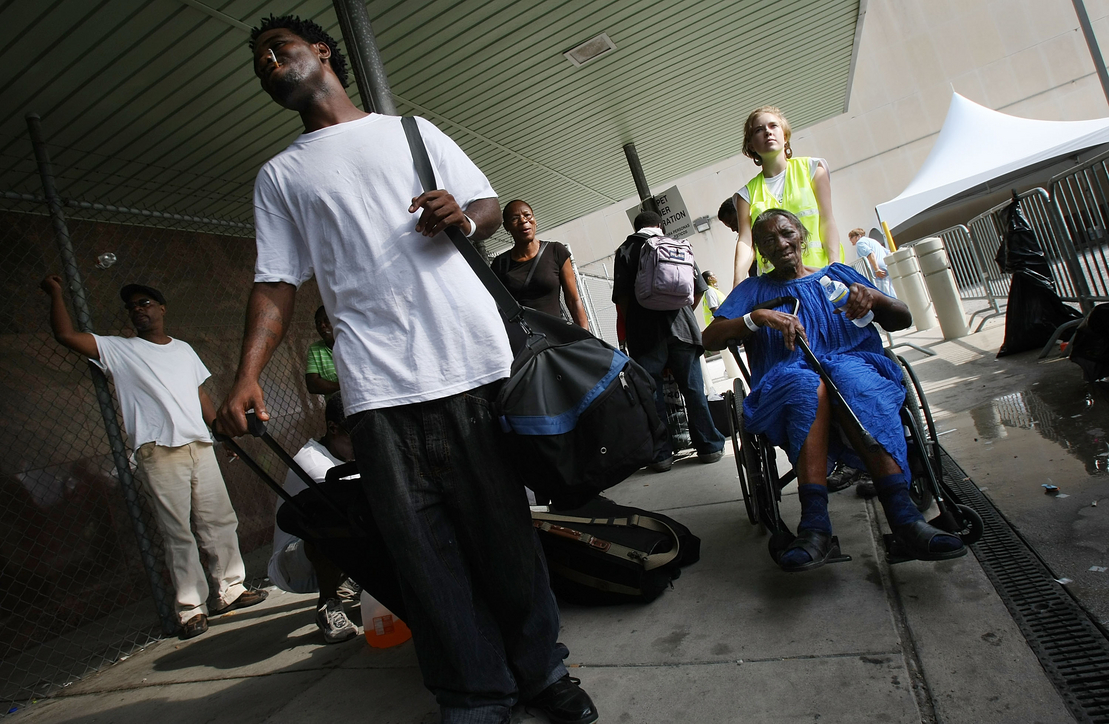 Victoria Asberry is assisted with her wheelchair as residents of New Orleans evacuate ahead of Hurricane Gustav in 2008. Mario Tama/Getty Images

Advocates have been trying for years to draw attention to the harsh conditions that people with disabilities face after natural disasters. Now federal data shows that the suffering is worse than anyone could have imagined.

Census Bureau data released Thursday shows that people with disabilities are far more likely than anyone else to face major hardships including displacement from their homes due to a major disaster.

If they evacuate, people with disabilities face dangerous levels of isolation, squalid living conditions, shortages of food and water and electricity, and permanent dislocation, an E&E News analysis of the data shows.

For example, 70 percent of deaf people who were evacuated reported living in unsanitary conditions a month after the disaster. More than 74 percent of evacuees who are unable to walk reported experiencing a lack of food one month after a disaster.

By contrast, just 9 percent of people who can walk faced a food shortage, Census figures show. Only 7 percent of evacuees with good hearing were in unsanitary conditions.

“This is completely in alignment with things we have noted over several years now regarding individuals with disabilities and disasters,” said Justice Shorter, a disaster adviser for the National Disability Rights Network.

“This should encourage folks to understand that all of the stories, testimony, commentary that people with disabilities have been giving for years are credible, believable, and it shouldn’t take this to make those stories valid,” Shorter added.

The information marks the first time the Census Bureau has analyzed how disasters affect groups of people. It comes as increasing disaster damage due in part to climate change is drawing attention to the disproportionate impact on marginalized people.

The data could galvanize long-standing efforts to improve the treatment of people with disabilities after destructive hurricanes, floods, wildfires and other events.

The Census data also confirm that disasters generally have a harsher effect on disadvantaged groups including low-income households and people who are racial or ethnic minorities.

But an E&E News analysis of the new data shows that people with disabilities suffer far worse consequences than any other group.

Perhaps the starkest disparity is that people with disabilities are much more likely than others to be forced to leave home during a disaster. Evacuation often leads to people being permanently institutionalized and facing a cascade of other problems.

The Census Bureau found that slightly more than 1 percent of U.S. adults had been forced to leave home in the past year due to a disaster.

But the evacuation rate for people with disabilities was astronomical by comparison.

Nearly 31 percent of U.S. adults who cannot care for themselves were forced to evacuate after a disaster.

Almost 21 percent of adults who are blind were forced to leave their homes.

Once they evacuated, most people with disabilities never returned home, according to the Census data.

For example, 59 percent of deaf evacuees reported that they never went back home. That’s more than quadruple the displacement rate for people without hearing problems.

“It’s because of how easily people end up being institutionalized,” Shorter said. “People are transitioned into facility-based settings, and it’s far more difficult to get back out of them.”

A report in 2019 by the National Council on Disability, a federal advisory agency, criticized “unnecessary institutionalizations during and after disasters.”

The 111-page report, titled “Preserving Our Freedom,” called for an end to institutionalizing people with disabilities during disasters, saying it leaves them isolated, in declining health and permanently residing in assisted-living facilities, nursing homes and other long-term settings.

But the new Census data makes clear that institutionalization is the norm for people with disabilities — along with other problems.

It also shows that people with disabilities who were evacuated after a disaster experienced other problems at rates that were five to ten times higher than people without disabilities.

They include food and water shortages; a lack of electricity; isolation; unsanitary conditions; a fear of crime and exposure to financial scams.

“I hope that this will allow people to open the door a bit wider and assure that people with disabilities are a central force in creating and cultivating more inclusive disaster planning and protection across this country,” Shorter said. “They are indeed the folks who are most impacted.”

The Census Bureau collected the data through its Household Pulse Survey, which is a 20-minute online survey that was launched shortly after the start of the pandemic to measure the disease’s effect on the population. The survey is designed to give up-to-date information that is not available through other Census data such as the annual American Community Survey.

The Household Pulse Survey has evolved to include questions that lawmakers and officials have used to guide policy. In March 2021, the Census Bureau began including questions on utility payments in the survey after a group of Senate Democrats raised questions about ratepayers falling behind on their bills and needing federal aid (E&E News PM, March 29, 2021).

In December, the bureau added questions about disasters for people who were forced to evacuate and their hardships.

The inclusion of disaster questions drew praise from the National Low Income Housing Coalition, which told the Census Bureau in a letter in December that the questions would help assess how disasters affect “displacement and immediate access to food, water and sanitary living conditions.”

The information could also be used to help design programs “to mitigate future disaster displacement” and provide more accurate data about the United States to international groups that track people who are displaced within their home country, Perls said in an email.

The Census Bureau says in its data tables that “these data are experimental” and that because sample sizes may be small, people “should take caution using estimates” based on population groups.