Makers of plastic products tell Democrats to back off 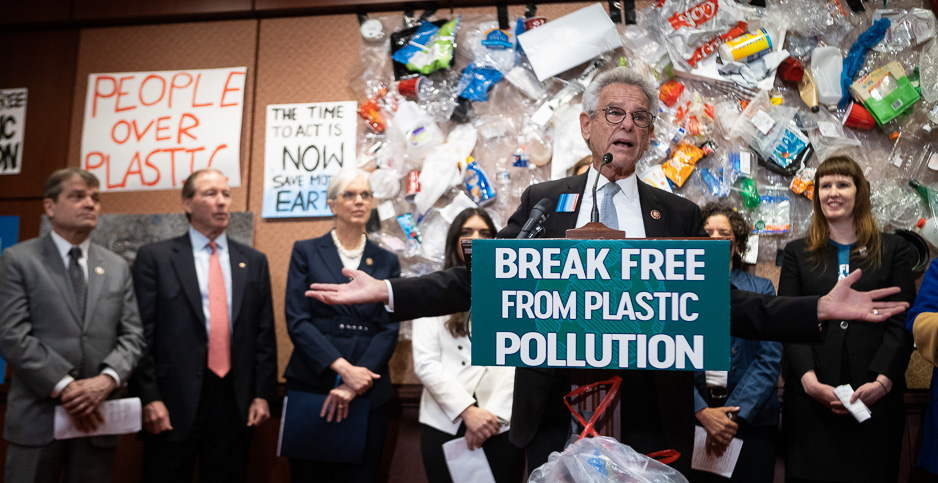 The "Break Free From Plastic Pollution Act" incorporates 10 measures, including a three-year pause on permits for new plastic plants, a ban on some single-use products and shifting the cost of recycling from taxpayers to plastic-producing companies (E&E Daily, Feb. 11).

"Our planet is being pumped full of plastic by big corporations who get off scot-free," Udall said at yesterday’s bill unveiling.

He held up a credit card to symbolize the amount of plastic the average person consumes every week through the air, water and food.

That’s according to a study by the World Wildlife Fund that measured the extent to which plastics permeates the environment after breaking down into particles under 5 millimeters in size.

The domestic recycling industry has been floundering since China shut its doors to American solid waste imports in 2017, leaving municipal programs to deal with a larger stream of contaminated waste.

Corporations and lawmakers from both parties have since come together to draft bills aiming to fund recycling infrastructure improvements and consumer education (E&E Daily, Feb. 7).

And in EPA’s fiscal 2021 budget proposal released Monday, the agency touted efforts to improve recycling infrastructure through the Community Recycling Infrastructure and Capacity Building Grant. That grant would be a part of the $5.8 million EPA would use to improve municipal recycling.

But the Udall-Lowenthal bill doesn’t have any Republican co-sponsors, and plastics associations yesterday came out against the nonrecycling aspects of the legislation.

"The moratorium and bans on plastic products are likely to increase environmental impacts while limiting access to a material that enables society to do more with less," he added, suggesting other packaging materials are worse for the environment than plastic.

The proposed moratorium would last three years, or until EPA issues a rule regulating emissions standards for plastic plants, most of which use fossil fuels to produce plastic.

"This legislation’s efforts to shut down plastics manufacturing would hurt the nearly 1 million hard-working men and women in our industry and the nation’s economy as a whole," said Tony Radoszewski, president of the Plastics Industry Association.

A spokesperson for Udall said his office engaged both groups while drafting the bill. Radoszewski said the Plastics Industry Association would continue to work with bill sponsors "to educate them about the benefits plastics provide."

While parts of the legislation aim to boost plastic’s 8.4% recycling rate, Udall said he doesn’t see the bill as simply establishing a national recycling program.

He said it’s a comprehensive solution to plastic pollution inspired by grassroots movements at the state and local level. In his view, recycling is the way companies justify the amount of plastic they produce.

Corporations "have fooled the American people into thinking that plastic is convenient and that if we just recycle hard enough, we’ll clean up the mess. That is not true," Udall said.