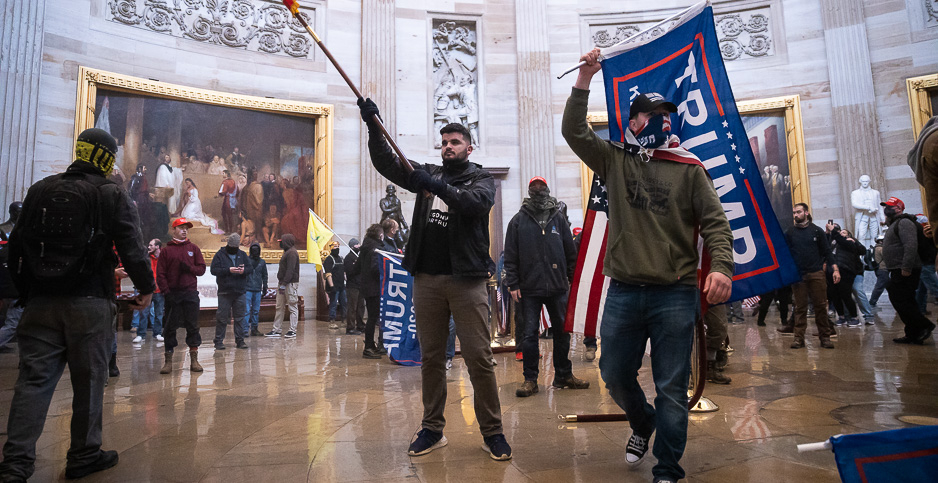 The day after the Capitol riot, Oregon defense attorney Matthew Schindler got a text message from a former client.

"Do you think they could use the ‘state of mind’ defense?’" wrote Ken Medenbach, referring to a tactic Schindler deployed when Medenbach was on trial for occupying the Malheur National Wildlife Refuge in 2016.

A jury acquitted Medenbach — along with leaders of the 41-day armed standoff Ammon and Ryan Bundy — on a charge that has emerged as key in the Justice Department’s early cases against alleged leaders of Capitol mob: conspiracy.

Earlier this week, DOJ charged a handful of militia members of conspiring with each other and others to obstruct an official government proceeding and prevent officials from carrying out their duties. In total so far, DOJ has filed conspiracy charges in at least five cases, including those against what appear to be leaders of the riot.

Prosecutors filed similar charges against Medenbach and the Bundys after Malheur.

Yin and others said the Malheur prosecution, which resulted in a stunning setback for the government, should serve as a cautionary tale for prosecutors of the Capitol riot cases (Greenwire, Oct. 28, 2016).

There are differences of scale, the experts acknowledged; the thousands who marched on the Capitol make the Malheur occupation look small.

But, Yin noted, many of the principles are the same. Both involved the takeover of government property. Both featured armed, self-styled militias and, importantly, in both the occupiers posted reams of evidence on social media throughout the event, seemingly building the cases against them for prosecutors.

At the Portland trial following Malheur, however, all of that blew up for the Justice Department.

"The wrongdoing seemed so absolute," Yin said. "There was no dispute they were on the property. They didn’t have any legitimate basis for being there. How could they possibly be acquitted?"

But Medenbach’s "state of mind" defense cut straight through the conspiracy charge.

A juror later told E&E News that prosecutors failed to adequately show that the intent of the Malheur occupiers was to impede government officials. Those who went to the refuge had a "diversity of motivations," the juror said (Greenwire, Feb. 7, 2017).

Schindler said Medenbach’s "state of mind was, ‘I am here to prove a point about federal ownership of Western lands,’" not to obstruct federal workers.

The trial took place in the months leading up to President Trump’s election in 2016.

Prosecutors, Yin said, also failed to fully grasp how deep distrust of the government — the same distrust that contributed to the Capitol riot — ran.

"The challenge," Yin said, "and what the prosecutors and legal observers like me did not take into account, is the degree of government skepticism in the jury pool."

Schindler, the defense attorney, condemned the protests. But he said that he’s come to believe conspiracy laws are meant for drug and gang activity — not political protests.

"Conspiracy law that was designed for organized crime, drug trafficking and those kinds of offenses is not the easiest thing to wrap around this type of protest activity," he said. "Largely, it’s because these guys aren’t super organized."

Plus, Schindler noted, the alleged defendants could easily argue that they were instructed to march on the Capitol by the federal government.

"Any defendant in this case, I would argue," he said, "should be saying President Trump told me to do this."

Conspiracy has been a key tool for the Justice Department for decades. In fact, federal Judge Learned Hand in 1925 famously called it the "darling of the modern prosecutor’s nursery."

That’s because it is a felony, carries more than several years of prison time and the bar to prove it is believed to be low.

In theory, all a prosecutor must do is show that the defendant agreed to take action that violates a law and took some sort of act toward that objective. The defendant doesn’t even have to actually go through with it. The agreement doesn’t have to be in writing.

Nevertheless, in some of the cases filed this week, DOJ and the FBI highlighted social media communications between alleged members of the Oath Keepers, a loosely organized collection of militia members that are largely former military and law enforcement personnel. Oath Keeper members were also present at Malheur.

Prosecutors used social media to place defendants Donovan Crowl, 50, and Jessica Watkins, 38, both of Champaign County, Ohio, and Thomas Caldwell, 65, of Clarke County, Va., inside the Capitol at the time of the riots.

And they scoured Facebook for comments that suggested they were intending to break the law, according to the affidavit in the case.

On Jan. 1, for example, Caldwell allegedly replied to a Facebook comment by writing: "I accept that assignment! I swore to support and defend the Constitution of the United States against all enemies foreign and domestic. I did the former, I have done the latter peacefully but they have morphed into pure evil even blatantly rigging an election and paying off the political caste. We must smite them now and drive them down."

Similarly, Caldwell allegedly commented on Facebook on Dec. 31 that "it begins for real" on Jan. 5-6.

"Let them try to certify some crud on capitol hill with a million or more patriots in the streets. This kettle is set to boil," he said.

While inside the Capitol on Jan. 6, Caldwell allegedly received the following Facebook message: "All members are in the tunnels under capital seal them in. Turn on gas[.]"

The case against Caldwell, Crowl and Watkins is one of dozens DOJ has filed, with more likely to come.

Yin said the conspiracy charge makes sense and noted that almost all of the cases have been filed in the U.S. District Court for the District of Columbia, which should provide a more receptive jury pool.

In the Malheur case, Oregon’s jury pool was drawn from the entire state, which included liberal areas like Portland and the much more conservative eastern part of the state.

"The jury pool would be different," Yin said if the cases stay in Washington. "You’d have a lot more government workers who would be less sympathetic."

But even one juror who believes the election was stolen, he noted, could be enough to stymie prosecutors.

Gregory Magarian, a First Amendment professor at Washington University in St. Louis’ law school, also saw similarities with the Malheur occupation. But he said prosecutors should be able to make the case that the Capitol riot wasn’t a peaceful demonstration protected by the Constitution.

"The people who went into the Capitol," he said, "all of them did something really significantly violative of the law, and they did it in a violent way."

Further, he noted that the intent appeared to be to shut down Congress, which he said was a more aggressive and hostile act than when the Bundys and their supporters occupied what was at the time an unoccupied refuge.

Schindler, the Oregon defense attorney, said prosecutors should also file misdemeanor charges, like trespassing, that should be very easy to prove.

In many cases, they have; multiple cases include charges of "entering or remaining in any restricted building or grounds without lawful authority," "violent entry," and "disorderly conduct." Others have been charged with assaulting federal officers, and destruction of government property.

Advocates who followed the Malheur occupation hope the FBI and DOJ learned from the Bundy trial.

"I’d hope," said Aaron Weiss of the Center for Western Priorities, "there was or will be a thorough accounting of how DOJ botched the Oregon [trial]."