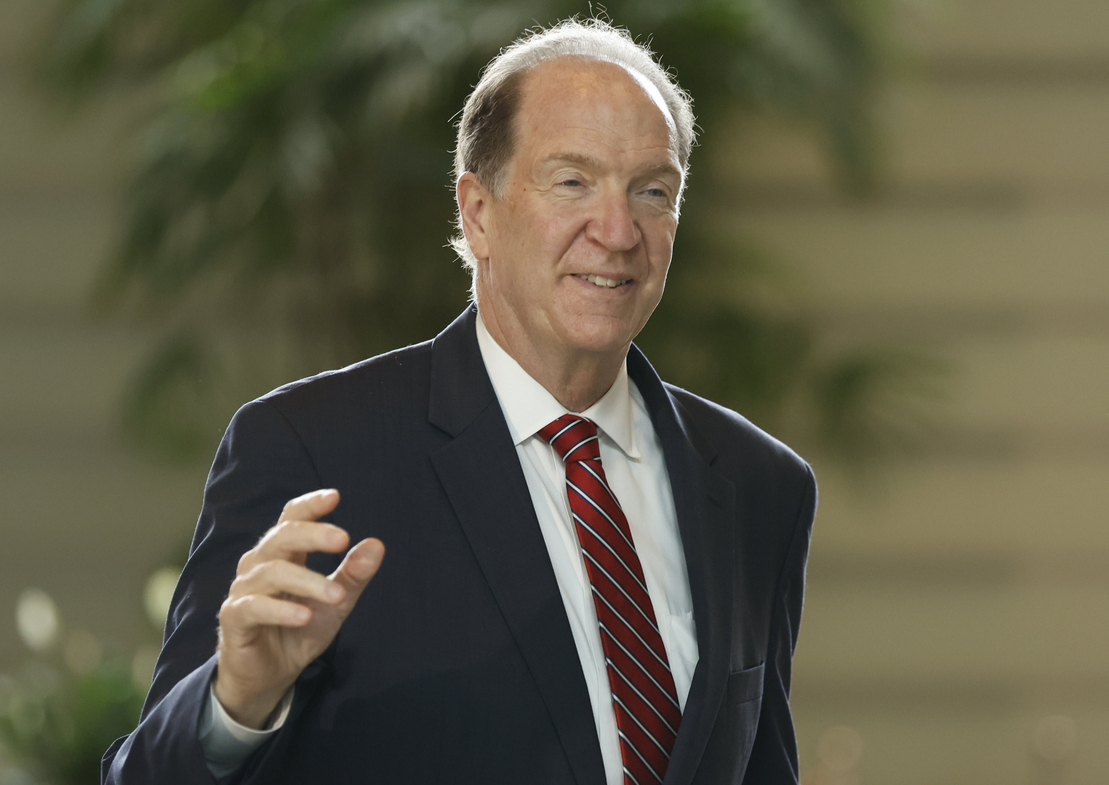 David Malpass, president of the World Bank, is seen arriving for a meeting with Japan's prime minister, Fumio Kishida, at Kishida's official residence in Tokyo on Sept. 13. Issei Kato/Pool Photo via AP

World Bank chief David Malpass, who earlier this week expressed uncertainty about the causes of climate change, on Friday welcomed more education on the issue.

“I would be happy to meet with climate scientists,” he told POLITICO reporter Ryan Heath this morning, adding that the bank already relies on scientific input to find “the most impactful projects.”

But Malpass noted the need for fossil fuels to add electrification in parts of the world that are lacking power.

The live interview had been delayed a day as the World Bank president sought to calm the global uproar prompted by his initial climate comments that suggested he has doubts about mainstream climate science. Earlier this week, former Vice President Al Gore called Malpass a “climate denier.”

“I am not a denier,” Malpass said during an appearance on CNN International. He later told staff in an email that his comments were “incorrect and regrettable.”

Friday’s online discussion occurred on the sidelines of the United Nations’ General Assembly and as lawmakers in the United States — the bank’s largest shareholder country — are considering how much funding to provide to it in the coming year.

Malpass used the forum to defend the bank’s support for natural gas projects in developing countries, downplay the need to coordinate on climate spending with other multinational development institutions and push back on calls for his ouster.

“Right now, what they often do is burn wood from forests that have already been depleted,” he added. “That’s really harmful for climate, for the environment and for the soil runoff in their countries. So that should be a very high priority for the world — to move them toward less carbon-intensive fuels.”

Many of those countries rely on burning diesel or even dirtier bunker fuel in aging power plants, “oftentimes under a contract with the previous colonial power,” he added. “We’re often in the middle of that, trying to help the countries move to energy access,” he said, highlighting the bank’s work to fund hydropower dams and electric transmission lines.

Malpass didn’t mention the potential for distributed renewable energy, microgrids and other decentralized energy solutions favored by some climate and development experts.

Some have pointed to his reported role in weakening a joint statement on “low-carbon, climate resilient development” that multilateral development banks drafted during the U.N.’s climate meeting last year in Glascow, Scotland. While a World Bank official told the Financial Times they “absolutely disputed” that Malpass had pushed for a weaker commitment or less ambition, he seemed to confirm the paper’s initial reporting.

“It would be more useful if each organization tried to have impact. So that’s the kind of declaration I would like to see,” he said.

“They don’t want to do,” he said of the other development banks. “They want to have four pages, that’s heavily negotiated, that takes a long time for for staff. I would rather have those staff working on projects.”

Climate activists have called for Malpass to be fired. That would be an unprecidented step for the World Bank’s board of directors to take, although former bank chief Paul Wolfowitz resigned under pressure from the board.

“I’m not resigning,” Malpass said, adding that none of the bank’s shareholders has asked him to do so.