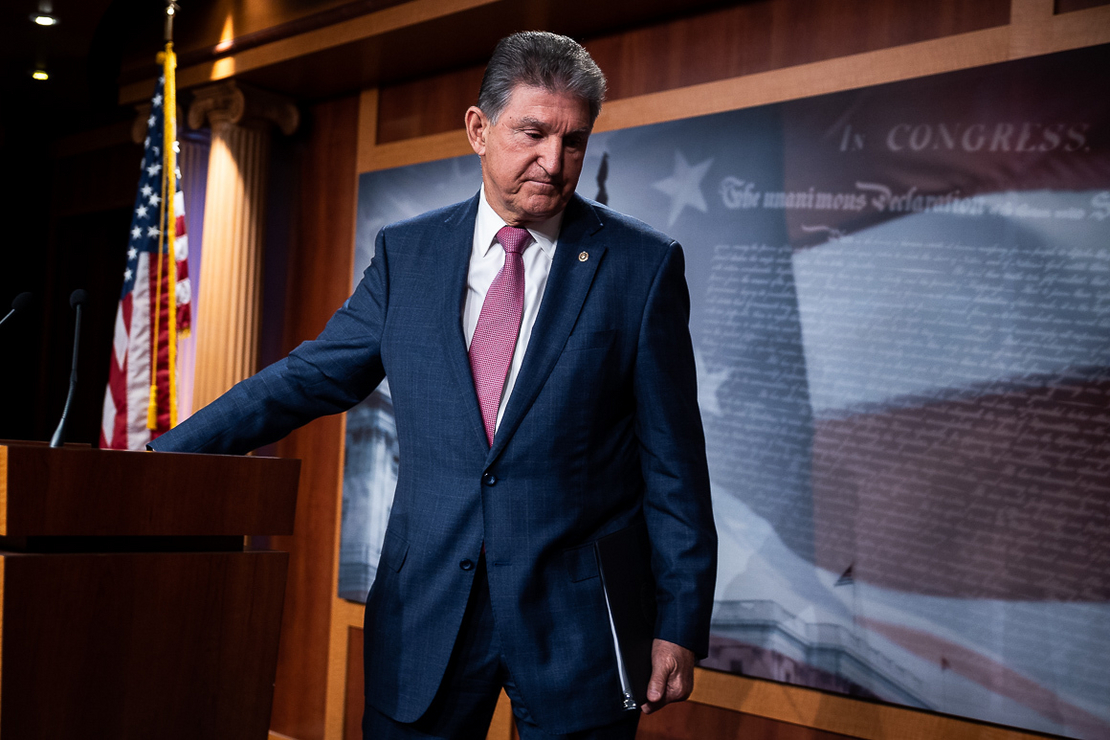 After days of silence and muddy messaging, Sen. Joe Manchin has made his position known on the $1.7 trillion social and climate spending framework unveiled last week: He’s not ready to support it — and it’s not clear whether or when he will be.

The West Virginia Democrat today demanded that the cost estimate for the draft legislation be produced before he can commit to supporting it, saying more information is needed to guard against what he alleged were “shell games” and “budget gimmicks.”

A Congressional Budget Office “score” of a complex, nearly 1,700-page bill that’s still being negotiated could take weeks to complete.

As a result, Manchin might have doomed prospects for House Democrats being able to vote on the reconciliation measure by the week’s end — a goal intended to bolster President Biden’s standing during the COP 26 climate talks in Glasgow, Scotland.

Manchin’s comments also may have delayed House passage of the separate $1 trillion infrastructure package the Senate passed over the summer, which progressives have said they won’t vote for until there’s an agreement on the complementary reconciliation bill.

“For the sake of the country, I urge the House to vote and pass the bipartisan infrastructure bill,” Manchin said at a news conference this afternoon on Capitol Hill. “Holding this bill hostage won’t work to get my support for the reconciliation bill.”

Manchin continued: “Simply put, I will not support a bill that is this consequential without thoroughly understanding the impact it will have on our national debt, our economy and the American people. Every elected representative needs to know what they are voting for and the impact it has, not only on their constituents, but the entire country.”

Insisting he was “open” to supporting the final product, he warned he was just as open to voting against it.

Manchin also defended himself at the abruptly scheduled news conference today, insisting he has been “work[ing] in good faith” on finding a compromise.

At the same time, Manchin has undeniably scored several personal victories throughout this process, from securing a lower overall price tag to the stripping out of the Clean Electricity Performance Program — concessions from party leadership that have enraged the liberal base.

Earlier in the day, Congressional Progressive Caucus Chair Pramila Jayapal (D-Wash.) said her 96-member coalition was prepared to support the bipartisan bill and the reconciliation framework together, with the expectation that Manchin and the Senate Democrats’ other moderate holdout, Kyrsten Sinema of Arizona, would be on board.

Following Manchin’s news conference, Jayapal told CNN she still trusted Biden to deliver Manchin’s and Sinema’s support, insisting, “We intend to vote on both bills in the House in the next couple of days.”

Asked whether that was the plan regardless of whether Manchin clarified his stance, Jayapal replied, “We’re finalizing the pieces on immigration, prescription drug pricing and details of child care implementation, but as soon as those get finalized, yes.”

But it’s not clear whether the full Progressive Caucus shares this resolve, when the group’s position has always been that it needed an ironclad promise of support from Manchin and Sinema in order to proceed. House Democrats can only afford to lose three votes before they are unable to pass legislation along party lines.

At least one other Democrat and vocal climate hawk, Sen. Brian Schatz of Hawaii, was, like Jayapal, not particularly scandalized by Manchin’s posturing today.

“We need a CBO score anyway, in order to process the bill through the Parliamentarian on the Senate side. None of what was said was exactly new,” Schatz tweeted regarding Manchin. “The tone alarmed people, but substantively nothing has changed.”

“Senator Manchin says he is prepared to support a Build Back Better plan that combats inflation, is fiscally responsible, and will create jobs. The plan the House is finalizing meets those tests — it is fully paid for, will reduce the deficit, and brings down costs for health care, child care, elder care, and housing,” she said in a statement. “Experts agree: Seventeen Nobel Prize-winning economists have said it will reduce inflation. As a result, we remain confident that the plan will gain Senator Manchin’s support.”