Manchin could get top role in writing clean energy standard 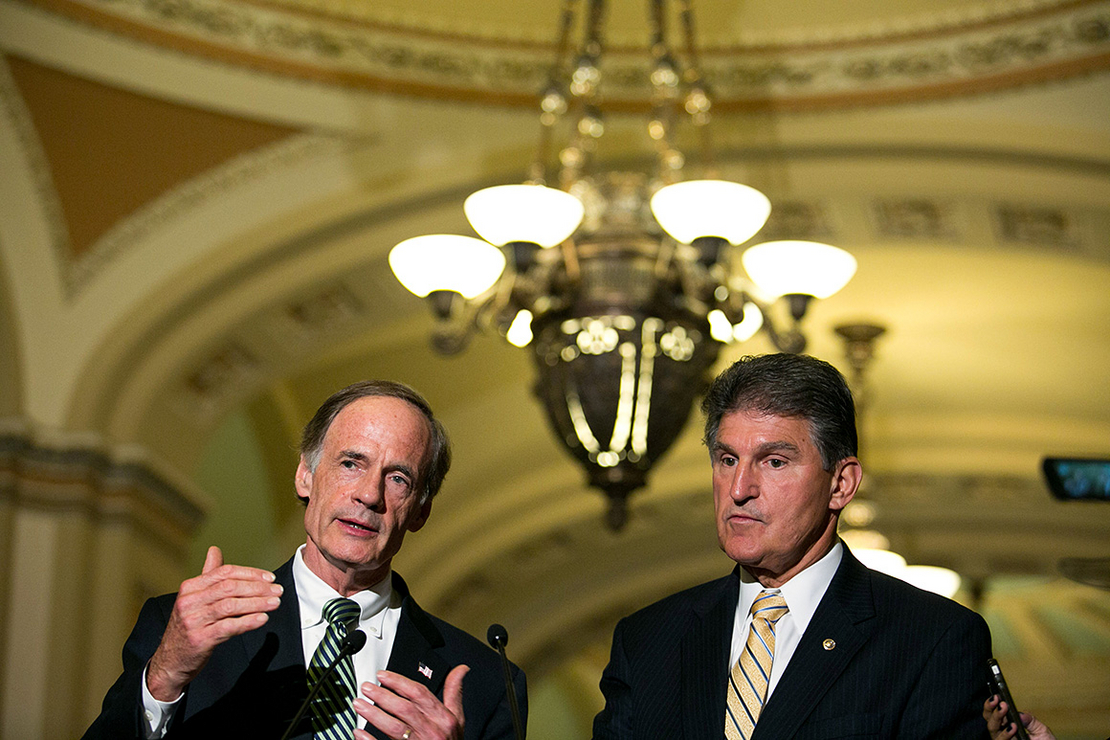 Democrats are grappling with jurisdictional questions that will help determine whether their signature climate policies get enacted into law, and Sen. Joe Manchin (D-W.Va.) could end up with a leading role in developing a clean electricity standard.

The Senate Budget Committee last week struck a deal on a broad $3.5 trillion outline for reconciliation, but lawmakers are beginning the delicate process of writing a budget resolution and determining which other committees will draw up some of the Biden administration’s marquee proposals.

The White House has pushed Congress to include a clean electricity standard (CES) in the reconciliation process (E&E Daily, June 30). Last week, Energy Secretary Jennifer Granholm said that she expects such a provision to be in the package (Energywire, July 12).

Now, Senate Democrats are coalescing around a CES that would cut emissions by half and generate 80% clean power by 2030. Lawmakers, budget experts and people involved with the effort expect the Energy and Natural Resources Committee, which Manchin chairs, to be charged with writing it, but other committee chairmen are signaling their own interest.

“Sen. Manchin’s committee and Sen. Manchin are very important,” said Sen. Tina Smith (D-Minn.), who for months has been assembling a CES proposal she hopes can pass the complicated rules that govern reconciliation. “I’ve spoken to Sen. Manchin several times about the CES, and he has told me that he remains open to the idea,” Smith told reporters last week.

Manchin’s office did not return a request for comment yesterday, but his support for a continued role for fossil fuels in the nation’s energy mix has already drawn complaints from progressive groups. The West Virginian emerged from a meeting with President Biden and Senate Democrats last week saying that proposals to eliminate fossil fuels are “very, very disturbing.”

CES advocates, however, noted that Manchin has an incontrovertible role in writing clean energy policy, given that he already controls the crucial swing vote in the Senate.

“Sen. Manchin is one of the votes we’re going to need for everything that is going to be in budget reconciliation, so he’ll be in all of the relevant conversations,” said Sen. Martin Heinrich (D-N.M.), a member of ENR. “I don’t think this is any different.”

In any case, the policy Smith has outlined to fit into budget reconciliation could offer some appeal for a senator from a state struggling with the demise of coal.

Traditionally, clean or renewable power standards require utilities to hit deployment targets by a certain date, often administered by a system of clean energy credits. Smith’s proposal would instead offer direct payments to utilities for hitting clean energy deployment goals, paired with a fee if they fail to meet those targets.

Advocates argue the design would more effectively incentivize investment and keep prices down than other policies, like a carbon tax.

“There is a backstop stick in the CES, but that’s only to make people take the carrot,” said Leah Stokes, a University of California, Santa Barbara, political scientist who has been involved with the groups and lawmakers developing CES proposals. “If they take the carrot, electricity bills stay stable or go down.”

With no budget resolution in hand, talks on policy specifics are in the early days, but the issue of committee jurisdiction will be critically important.

The resolution will include broad instructions giving dollar allocations to other committees. Each panel will then write policies in their jurisdiction to be cobbled together into a reconciliation bill that can bypass the filibuster and pass the Senate by a simple majority.

For now, that means the Budget panel is the key arbiter, as committees of jurisdiction try to figure out which policies they can pass through the “Byrd rule,” which only allows for certain tax and spending policies.

“The most important thing with surviving reconciliation is actually the input of the experts on the Budget Committee because the key is to make sure that it’s structured in a way that is compatible with reconciliation,” Heinrich said in an interview last week.

“Those of us on ENR, on EPW, we understand how to structure a CES,” Heinrich added, referring to the Environment and Public Works Committee. “What’s more important is structuring the CES to be compatible with budget rules.”

But multiple Senate panels may ultimately try to claim jurisdiction over aspects of the CES, depending on which executive branch agency would be put in charge.

To that end, Smith said she’s consulted with the Department of Energy, which could leave it in the hands of ENR. She said her proposal is “a pure budget process.” “In fact, it matches up and it can fit within the existing Department of Energy programs,” Smith told reporters.

Other committee chairmen nonetheless said last week that they anticipate playing a role in developing the landmark policy, which will be a major component of the suite of climate policies being readied for the budget reconciliation push.

“If there is to be a clean energy standard or a clean electricity standard, I believe the Committee on Environment and Public Works would be ultimately very much involved,” EPW Chair Tom Carper (D-Del.) told E&E News last week.

Smith’s proposal could also open the door for the Finance Committee to weigh in. Sen. Ben Cardin (D-Md.), a senior member of both EPW and Finance, said last week that he anticipates both panels will be involved in drafting the policy.

Finance Chairman Ron Wyden (D-Ore.) also suggested that the tax-writing panel could have some jurisdiction over a CES, although he told E&E News he’s more focused on the sweeping clean energy tax overhaul, S. 1298, that he plans to include in the reconciliation package.

Sen. Sheldon Whitehouse (D-R.I.), however, was skeptical of the idea that the CES could get punted to other committees. “I’m pretty sure it’s ENR,” Whitehouse, a member of the Budget Committee, said last week. “If there’s a way to write it so that it isn’t, I’m not aware of that way.”