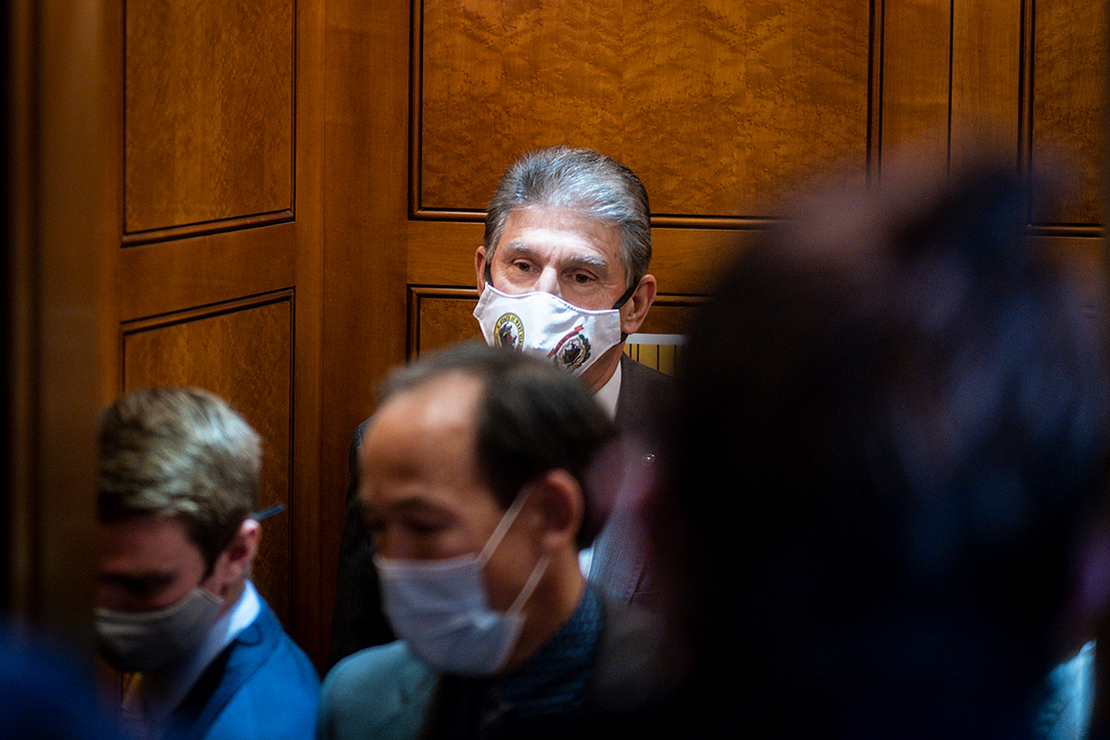 Senate Democrats are continuing to negotiate changes to the proposed methane fee to satisfy Sen. Joe Manchin (D-W.Va.) and other moderates, complicating their push to wrap up a procedural review and finish their climate and social spending package by Christmas.

At the same time, they’re also beginning to publicize bill text and new scores from the Congressional Budget Office, as they see progress in clearing the nearly $2 trillion “Build Back Better Act” through the Senate parliamentarian.

Manchin, who chairs the Senate Energy and Natural Resources Committee, said yesterday that Democrats had “made some good adjustments” to the policy in response to his concerns about overlap between the fee and the Biden administration’s newly proposed methane regulations.

“If they’re basically complying with the regulations, then you shouldn’t be subject to a fee,” Manchin told reporters yesterday. “So we’re talking about different things like that.”

Those comments reflect a debate that’s been raging behind closed doors for months but are further indication that Manchin is not fully satisfied with the compromise version of the provision Democrats struck in October.

The House-passed legislation would pair a fee on excess methane emissions, rising to $1,500 per ton by 2025, with $775 in subsidies to help oil and gas operators reduce and monitor those emissions. It was a deal meant to mollify concerns from moderates and producing state Democrats, but Manchin isn’t alone in doubling down. Rep. Henry Cuellar (D-Texas), who has said he wants to lobby Manchin to nix the methane fee as it moves through the Senate, tweeted yesterday that "there is no need for a duplicative fee" if producers are abiding by EPA regulations.

While Cuellar voted for the full package in the House, the burgeoning public campaign could mean changes are coming for the policy. Senate Environment and Public Works Chair Tom Carper (D-Del.), who negotiated the initial compromise, has said he expects “additional changes to what the House has done,” as he negotiates with Manchin and deals with procedural hurdles (E&E Daily, Dec. 8).

Those negotiations continue as Democrats work this week to clear each committee’s slice of the bill with the Senate parliamentarian to ensure it passes the “Byrd rule” that governs reconciliation, which dictates that every provision must have a direct impact on federal spending or revenues.

The EPW Committee was scheduled to take its “Byrd bath” yesterday, but Manchin said his own meeting with the parliamentarian had been delayed until today.

Senate Finance Chair Ron Wyden (D-Ore.) was confident yesterday that the clean energy tax portion of his panel’s reconciliation proposal — which he called “the linchpin in terms of the current efforts to deal with climate change” — would remain intact, both complying with the Byrd rule and surviving any potential challenges from the panel’s ranking member, Sen. Mike Crapo (R-Idaho).

Wyden also said he had a meeting with the Senate parliamentarian scheduled yesterday to discuss that portion of the Senate Finance Committee’s draft text.

“Obviously we feel very strongly that because we’re talking about taxes and tax expenditures, that this is what you need to get over the Byrd bath,” Wyden told reporters.

Senators are also dealing with a flurry of lobbying, as interest and industry groups ask for tweaks and additions to various provisions of the package.

The hydropower industry has been pushing for weeks to include a 30 percent investment tax credit to keep dams alive amid expansions of renewable and carbon capture credits, but the policy was absent from the House bill (E&E Daily, Oct. 26).

Wyden said he was “working closely with people in our region,” particularly Sen. Maria Cantwell (D-Wash.), to get the hydro incentive added to the reconciliation bill.

“[We] feel very strongly about this being consistent with the ‘Clean Energy for America Act,’” Wyden said of the hydropower tax credit, referring to the larger clean energy tax bill that makes up his reconciliation framework dealing with the climate crisis.

Carbon capture advocates, meanwhile, are seeking changes to the expansion of the 45Q tax credit contained in the bill. Currently, the legislation would raise the incentive from $50 to $85 per ton, so long as a power plant or industrial facility captures at least 75 percent of its carbon.

But in a letter to Manchin and Wyden this week, dozens of industry, union and advocacy groups asked that the 75 percent threshold to qualify for the credit be nixed. The strict requirement, they wrote, could be “a dealbreaker for investment” for many carbon capture projects and ultimately undermine President Biden’s climate goals.

“As such, the minimum percentage capture provision directly contradicts and undermines efforts elsewhere in the Build Back Better Act to ensure that enhancements to clean energy and industrial tax credits help safeguard and create domestic American jobs that pay above prevailing wages,” they added.

As the Byrd bath process continues to play out behind closed doors, Senate committees are beginning to release their own versions of the bill text for the reconciliation package, as well as coinciding CBO scores.

The text and scores vary due to differing jurisdictions between House and Senate committees, making comparisons difficult, but they’re expected to largely match the House-passed bill, save for some controversial provisions.

But the CBO has yet to weigh in on the Senate bill’s major energy and environmental proposals, or its proposed changes in the tax code that will be key to offsetting new spending.

Just under $10 billion of the more than $210 billion in proposed spending in the four sections would be offset by new revenue or other programmatic changes. The VA and Small Business scores match those given for the same sections in the House-passed bill, showing senators have made no significant changes.

The Senate spending reviewed so far is only a small portion of the close to $2 trillion the chamber is expected to propose in the package. It will be closely compared with the House’s $1.7 trillion plan that would add about $160 billion to the federal deficit over the next decade.