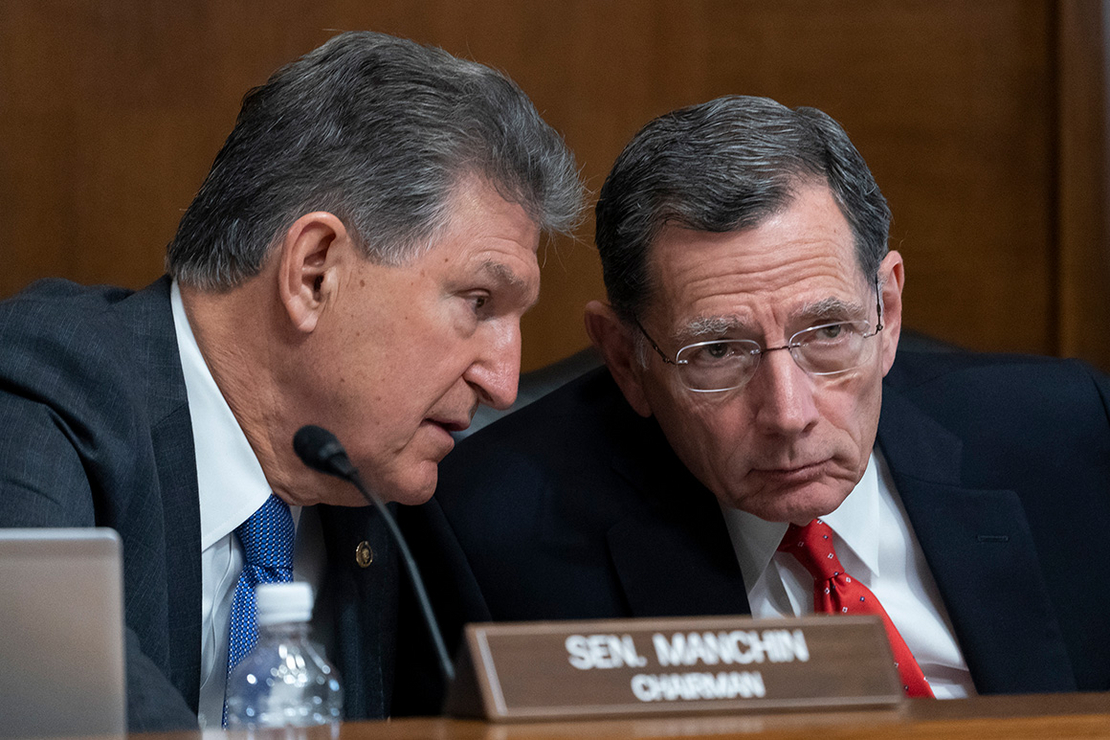 Senate Energy and Natural Resources Committee members yesterday wrestled with how to address rising energy prices and the fallout from Russia’s invasion of Ukraine.

“Russia has weaponized energy … and the thing I know about an adversary or a bully is if they have a weapon, you better have one that will match it or be better than theirs,” said Manchin. “And we do, we just haven’t used it.”

“Is this a time for us to consider Defense Production Act to get things done so we get ourselves back in the strength of being energy independent?” Manchin asked hearing witnesses.

The suggestion mirrors a letter yesterday from a handful of House lawmakers pushing President Biden to use Defense Production Act authorities to expedite and expand oil and gas production. The bipartisan letter was led by Democratic Rep. Jared Golden of Maine.

The administration has been reluctant to call for more oil and gas drilling, but Energy Secretary Jennifer Granholm has urged companies to produce more. Still, the industry says it will take time to ramp up production after pandemic ramp-downs.

Most Democrats on the committee, however, disagreed with Manchin and Republicans on doling out oil and gas leases and rapidly building infrastructure, arguing that the fossil fuel industry has the capability to produce more right now.

“It isn’t lease pauses on federal land, and it isn’t the Keystone pipeline,” said Sen. Angus King (I-Vt.) during the hearing. “It is the failure of the industry to respond to the increase in demand since the decline of the pandemic.”

The White House has said oil and gas companies have more than 9,000 leases they’re not using (E&E Daily, March 10).

Democrats also accused fossil fuel companies of intentionally keeping supplies low to cash in on high prices and pay out investor dividends, citing billions of dollars in profits for oil companies in 2021.

“The president has been clear he believes they have the tools they need … to go get more oil here in the United States. He has encouraged them to do that,” White House press secretary Jen Psaki said yesterday.

Republicans argue that the Biden administration has created an environment of hostile uncertainty to oil and gas production. Through messaging and agency nominations, Republicans said, Biden is making it difficult for producers to commit to projects that can carry significant financial risk and necessitate hefty capital investment.

“It’s the uncertainty with policy that really puts handcuffs on the ability to move forward,” said Sen. Lisa Murkowski (R-Alaska) during the hearing. “When you have uncertainty, investors don’t invest.”

Manchin agreed with Republicans, saying that the administration should encourage short- and long-term investments in fossil fuels, like constructing natural gas pipelines and LNG export facilities. He said those projects can still be a part of the president’s climate change agenda.

“It’s not locking us into a fossilized version of the past. It’s infrastructure that’s flexible,” said Manchin. “I am not saying to hell with our climate goals; these actions are not all mutually exclusive.”

Manchin said that future fossil fuel infrastructure could be adjusted to transport and process hydrogen. He also agreed with Democrats that fossil fuel producers should begin to prioritize production over profits and work with the Biden administration.

Colette Hirstius, a Shell executive, said resuming federal leases and releasing a five-year plan for oil and gas operations in the Gulf of Mexico would be immediate steps that the administration could take to help industry boost production. She added that many of the 9,000 unused leases have already been determined by producers to have small oil reserves and therefore don’t justify drilling operations.

Republicans yesterday continued expressing concerns about the administration reaching out to certain oil states, like Venezuela and Iran, for help with oil supplies while looking to crack down on domestic fossil fuel energy.

Democrats touted the potential for electric vehicles and green energy to circumvent Russian influence and the oil and gas market instability.

“We should be accelerating the development of electric vehicles and other zero-emission transportation options so that we will eventually not have to worry about gas prices or give [Russian President Vladimir] Putin and other oligarchs the ability to use oil as a weapon,” said Sen. Mazie Hirono (D-Hawaii).

Republicans shot back that the country’s reliance on imports for clean energy components would leave Americans dependent on countries like China. The GOP has long called for more domestic mining.

Sen. Ron Wyden (D-Ore.) pointed to his legislation, S. 3783, to promote mining. It seeks to find places that are “economically feasible and environmentally sound” to extract resources (E&E Daily, March 9).