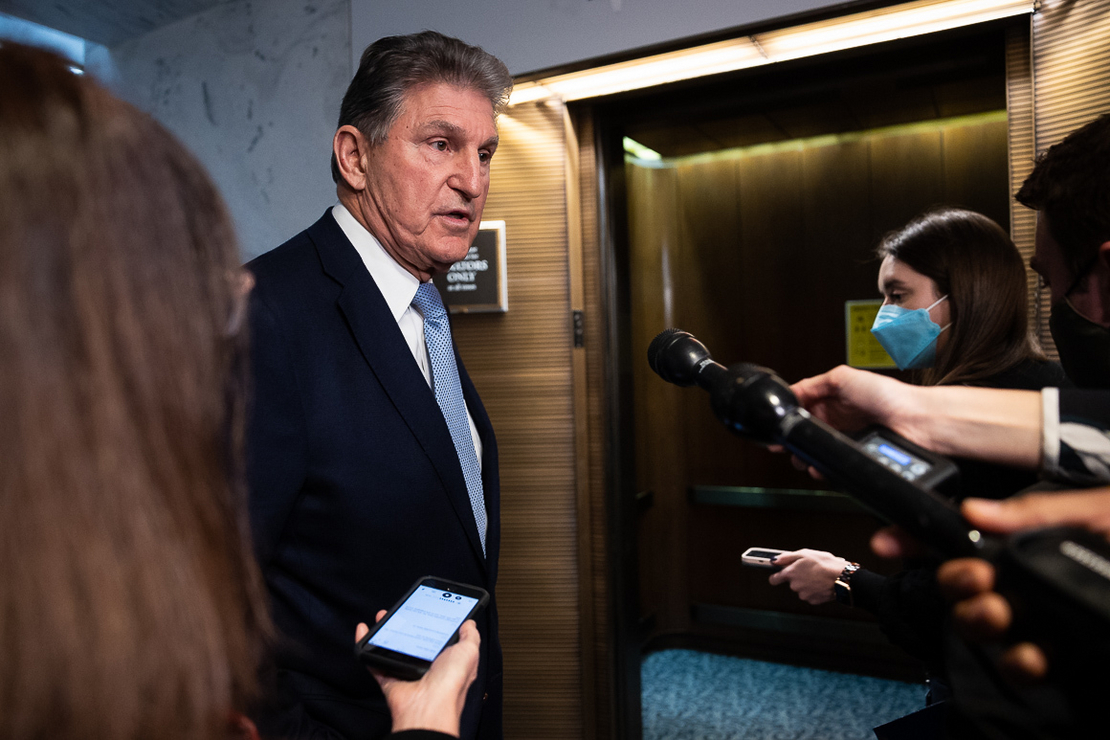 Senate Majority Leader Chuck Schumer (D-N.Y.) is ramping up the pressure to finish his party’s climate and social spending bill by Christmas, but it looks like an increasingly difficult task given continued concerns from Sen. Joe Manchin (D-W.Va.) and the lengthy process of clearing the legislation with the Senate parliamentarian.

Manchin, the Senate Energy and Natural Resources Committee chair, spoke with President Biden yesterday in a phone call that offered Democrats little immediate assurance that the West Virginia Democrat is on board with the $1.7 trillion “Build Back Better Act.”

He later told reporters that he remained "engaged" on negotiations. "We’re still talking about different iterations," he said, according to CNN. A spokesperson for Manchin called it a "productive conversation."

Many could be forgiven for experiencing whiplash. Earlier in the day, Manchin doubled down on his concerns about federal debt and rising inflation. He also called a Congressional Budget Office report released Friday, which showed the bill would cost $3 trillion if some programs were extended indefinitely, “very sobering.”

“We’re still talking. I’m listening to everybody,” Manchin told reporters ahead of his call with Biden. “But I’m just telling you, you asked me about inflation is real, it’s not transitory. It’s alarming. It’s going up, not down.”

Manchin also said he would like to see programs written so that they extend for 10 years. As the bill is currently drafted, many of Democrats’ marquee social programs would have varying time frames before they expire, in some cases extending for only a year, meaning that his request could require a massive overhaul of the legislation.

Manchin’s comments yesterday could be a worrying sign for Democrats, and his call with Biden came at a crucial time. Party leaders and committee chairs are pushing to finalize negotiations and wrap up as soon as possible, and some Democrats have been concerned for weeks that they could lose momentum if the process drags on too long.

Manchin’s concerns aside, Democrats are also dealing with another challenge: the Senate parliamentarian, who is putting the legislation through the “Byrd bath” process to ensure it does not violate the strict rules that govern budget reconciliation.

Each provision of the legislation, per Senate rules, must have a direct impact on federal spending or revenue. Committees have been meeting independently with the parliamentarian, and this week, their pieces of the bill will go through a bipartisan review in which Republicans will have a chance to challenge various provisions (E&E Daily, Dec. 13).

Senate Finance Chair Ron Wyden (D-Ore.) said yesterday his panel is still working through “more than 20 issues” with the parliamentarian.

The Finance Committee put out a draft version of its portion of the bill over the weekend. It’s the single biggest slice of climate policy in the bill, encompassing some $300 billion in clean energy and electric vehicle tax credits.

While the energy provisions largely conform with the House-passed version of the package, Wyden did make some key changes, including a new investment tax credit for environmental projects at existing hydropower facilities.

But Wyden also acknowledged that he’s still negotiating with Manchin on the energy tax section. His draft proposal left in place a new tax credit for union-made electric vehicles, which would supplement a separate expansion of the EV tax credit, that Manchin opposes.

“I talk to Sen. Manchin regularly about energy and taxes, and that’s going to continue,” Wyden told reporters.

Despite those challenges and a relatively narrow window before Christmas, Schumer yesterday that the Senate is still on track to get the reconciliation package “across the finish line before Christmas.”

“I will also continue to meet with my colleagues, and I know the president will also continue discussions with them as we hammer out the final details of ‘Build Back Better,’” Schumer said on the Senate floor. “This remains a laborious process, requiring a lot of precision and a lot of pieces moving together.”

Republicans will try to leave their own mark on the legislation this week.

The Senate Environment and Public Works Committee will begin its bipartisan Byrd bath as soon as tomorrow, according to Chair Tom Carper (D-Del.), offering the GOP a chance to challenge the proposed methane fee, the green bank and a slew of EPA programs.

“That’s sort of like the next step,” Carper told reporters yesterday.

Ranking member Shelley Moore Capito (R-W.Va.) has said she is especially focused on a policy in the House bill that could potentially allow the Federal Highway Administration to slap penalties on states that do not hit greenhouse gas emissions targets (E&E Daily, Dec. 8).

Unlike some other committees, however, EPW has not yet released its own bill text or CBO score for its portion of the legislation amid continued negotiations with Manchin on the methane fee.

The proposed Methane Emissions Reduction Program would pair $775 million in subsidies for methane abatement with a fee on methane emissions, rising to $1,500 per ton in 2025, from oil and gas facilities.

Manchin has said he is concerned about how it could overlap with EPA’s newly announced methane regulations, though advocates say facilities that meet the agency’s rule would not be subject to a fee (E&E Daily, Dec. 10).

Carper said he’s holding out hope that a compromise “will be embraced and be part of the deal.”

“I think we’re there, and so stay tuned,” he said.