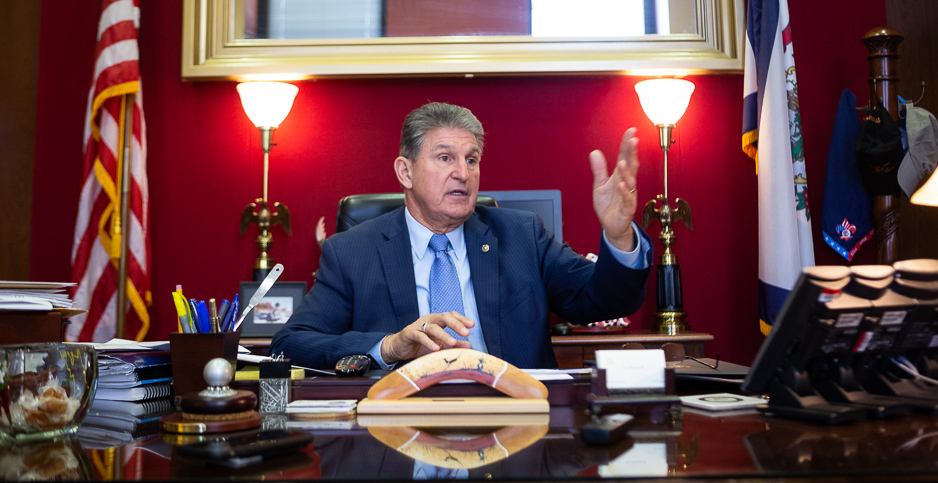 It’s been nearly a year since he became the top Democrat on the Senate Energy and Natural Resources Committee, and Sen. Joe Manchin is still preaching that middle ground to balance energy and environment policy with economic progress.

Despite initial concerns from progressives about his fossil fuel credentials, the West Virginia lawmaker and former governor has blended into the panel’s traditional bipartisan approach under Chairwoman Lisa Murkowski (R-Alaska).

"There were some expressions of uncertainty about where Chairman Murkowski and I might lead the committee," Manchin said on the Senate floor yesterday. "And there was a great deal of skepticism about my ability and interest in addressing climate change, but I can assure you it is strong."

The duo has helped shepherd 77 bills out of committee this Congress — 52 energy measures and 25 natural resources bills. Those numbers mark the committee as one of the most productive bodies in the Senate this Congress.

Much of that work has focused on a clean energy "innovation" agenda to address climate change through technologies that can help reduce carbon emissions. The goal, Manchin says, is to craft a legislative package.

Manchin has also showed a willingness to listen and act on environmental priorities. None more so than the Pebble mine in Alaska, where the senator announced, unprompted, in an interview that he opposes the project.

On the occasion of nearing his anniversary atop the committee, Manchin sat down with E&E News for a one-on-one interview to talk energy, natural resources, climate change and impeachment:

What have you learned in this past year?

I’m learning a lot about [the Bureau of Land Management] and Western lands, which I had very little knowledge of before because it really has no effect on West Virginia or the eastern part of the United States.

So, learning that and the water concerns that people have, the amount of public lands being owned in states where it’s not revenue-producing and making sure they have access to the land — all these type of things.

I’m trying to figure out, you know, we have so many wildfires and so much weather conditions are affecting all over, and a lot of that is in the public lands area.

Why can’t we go in and timber that after it’s been burned? Why does it take longer than three years to get permits to get this? It would help with reforestation. It would help basically with jobs and the economy and resources.

It would just be better all the way around. But the slowness of the permitting process to do what they are doing; I get a lot of complaints.

There are sawmills shutting down. The land has already been scorched, but what I’m saying is within a year we should be able to go in and take that product there and let that new growth begin.

There is also the environmental pushback on that end. How much are you feeling that?

I want to hear from all of them. I have a really good rapport with all of my members of the caucus and on my committee. I learn a lot from them.

Do you see yourself as a referee of sorts on these issues then?

I’ll give you the perfect example, the Pebble mine. There’s no way, shape or form that the Pebble mine should go forward when you are basically going to have the chance at ruining one of the greatest fisheries in the world.

That doesn’t make any sense to me at all. The reward is just not there. Why would we do it? So, [Murkowski] knows my position on that. And I was the one who voted for the [Arctic National Wildlife Refuge], because I saw her position and went up and visited the area.

So, you try to look at things in a pragmatic way: What’s the benefit, what’s the risk and what’s the balance between the environment and the economy?

How can you leverage your position to help West Virginia on the natural resources side and then on the energy side of the committee?

On the energy side of it, we are very much an energy player. I just want to make sure we have all-in energy policy. I’ve always been an innovator, not an eliminator.

If you stop using every drop of oil and every lump of coal and [thousand cubic feet] of gas, you are still only affecting it by 15%. What about the other 85%?

Let’s get real. You better innovate. That’s why we have the "EFFECT Act" and so many other things.

It’s a committee that works. The reason it works is because Lisa and I are friends. We trust each other. We aren’t trying to get a "gotcha" moment. "Gotcha?" I’ve got her back and want to make sure we succeed.

What is the strategy to move some of these bills?

We are the only game in town. Why I say that, in the United States Senate you have one committee that truly is doing its work. We are passing bills in a bipartisan way with good amendments. We are getting good debate in the committees, and I think you’ve been up there, you’ve seen that. That’s the way it’s supposed to work.

But not here in the Senate, and then it gets shut down because the majority leader doesn’t like it, it might hurt somebody to vote on this, or lose it for leverage. This stuff makes no sense at all.

We have got to change the rules of the Senate. You shouldn’t have that much control, that much power, in one or two people’s hands.

What do you mean change the rules? Like do away with the filibuster?

No, no, not at all. I would never eliminate that. The filibuster is there to make us work together. The Senate is unique.

But on the other hand, the Senate should work. And right now, if a bill comes out in a bipartisan way, don’t you think it should be guaranteed a floor vote, with amendments? Don’t you think?

What is your strategy for moving the bills then? Packages, combining with natural resources? Is this going to be kind of a rerun of the 2016 massive energy bill?

I think we’ll have another packaged bill. I don’t think they will move separately. Nothing moves separately around here. Molasses moves faster than we move. The timing, I don’t know. I know one thing, it is imperative that we get it done this Congress, before the end of 2020.

A lot of these bills are related to carbon and climate change, and you just mentioned you are more of an innovator, not an eliminator. But you are also the guy who famously shot the cap-and-trade bill.

The thought process of cap and trade before, they were allowing industries that produced no carbon whatsoever to trade in the financial scheme. That makes no sense to me at all.

I used to beg and say hey, you want to give tax credits and want to develop a new source of energy, make sure that those credits are mandated to be used in areas with lost jobs.

I’ll give you a perfect example, I say I got coal miners who will build you the best windmill you have ever seen. The best solar panels. Give them the chance.

Where are you in the sense of a climate change strategy, nationally? Is there more of a role for the federal government to regulate carbon?

The federal government would love to regulate everything. In the democracy that we have and in a capitalist society, you usually move people by the whole carrot and the stick type thing. Here’s the incentive to do something, here’s the penalties if you don’t do it that way.

We went backward this last year as far as our emissions. We have to find out how do we not go backward and still be going forward but also still using all the energy we have. The technology has not developed rapidly enough. And with that, we went a period of time we put no effort whatsoever in.

Can I ask some about your oversight responsibilities? What are your thoughts about the Department of Energy’s involvement in the Ukraine scandal?

First of all, from a geopolitical standpoint, we should be involved in our NATO allies. We should be involved in making sure they have energy security and energy reliability. They shouldn’t have to depend solely on a country that we are protecting ourselves against, which is Russia and China moving in and collaborating with them, who will use energy as a geopolitical weapon. And they have done it.

So why shouldn’t we be involved, especially when we have an abundance of energy right now? We can help relieve that, tremendously. We can help connect them to distribution lines that is not dependent on a country that does not have their interest or have the same values that we have.

Do you see former Energy Secretary Rick Perry’s involvement, outside of that energy part, troublesome?

I don’t know enough about it. I can see the job that Rick is to do and supposed to do from a policy standpoint about how we relieve the pressure geopolitically.

Should Rick Perry and the DOE aides that have been named in the articles of impeachment testify at the Senate trial?

I think everybody should testify. I don’t know why we could hold back. If there is a subpoena … if I know one thing, no matter what my position as governor or whatever, if I was subpoenaed, I had to go. I never thought I had an option of not going.

So I don’t understand it. I understand the privileges of executive power and all that, but people down that food chain should be required. Absolutely, on both sides.