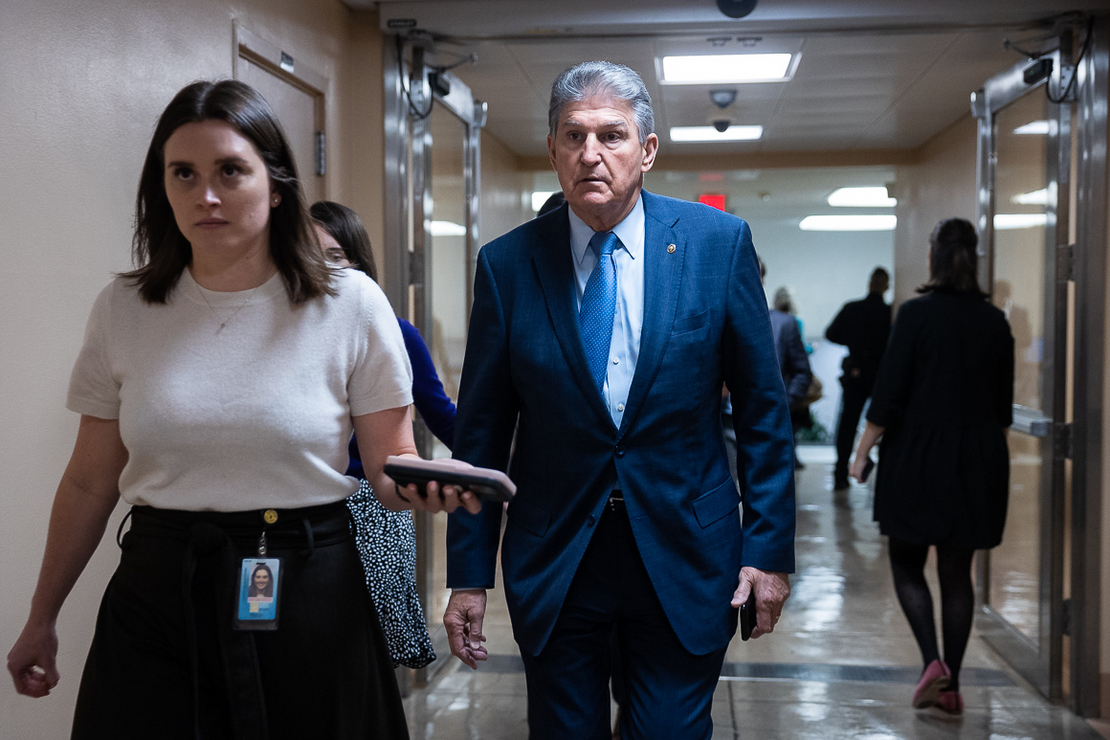 Democrats are optimistic they can revive parts of their massive climate and social spending bill, but Sen. Joe Manchin yesterday complicated their plans.

Congressional Democrats are hoping President Biden’s State of the Union speech Tuesday, which was light on climate references and noncommittal on the fate of the “Build Back Better Act,” will serve as a tactful appeal to Manchin: an audience of one in the 50-50 Senate.

But the West Virginia Democrat, the moderate swing vote who derailed the $1.7 trillion legislation in December over concerns about big spending in a time of inflation, has his own ideas about what any reconciliation package should contain.

In an interview with POLITICO, he reiterated in slightly more detail a vision he’d shared with reporters a few weeks earlier: that he saw an opening to pass something resembling the $550 billion climate portion of “Build Back Better Act” with savings found by first overhauling the tax code and tackling prescription drug pricing reform.

Crucially, however, Manchin — who is chair of the Senate Energy and Natural Resources Committee — said he wants to see the legislation take an “all-of-the-above” approach, including ramping up oil, gas and coal production, especially in light of the Russian invasion of Ukraine.

It’s not a new view for Manchin, who has long supported his state’s fossil fuel power generation, but it could cause consternation among progressives who see clean energy as the long-term solution to U.S. energy security concerns and the world’s reliance on petrostates.

“As a nation we must commit to once again achieving complete energy independence by embracing an all-of-the-above energy policy to ensure that the American people have reliable, dependable and affordable power without disregarding our climate responsibilities,” Manchin said in a statement this week ahead of the State of the Union.

Other Democrats, including Biden, have not ruled out sanctions on the Russian energy industry, but for the most part, they do not support long-term oil and gas production increases at home.

“I think we have to draw a distinction between the short-term tactics that may increase pressure on Russia and allow us to manage an economy through this difficulty and what we eventually need to do, which is to transform the world economic system into one that depends less on petro-fascists,” Sen. Brian Schatz (D-Hawaii) told reporters yesterday.

What the political dynamic means for a major reconciliation package isn’t clear yet. Senate Majority Leader Chuck Schumer (D-N.Y.) told reporters yesterday there were “a lot of discussions going on among senators.”

When asked what gave him confidence this time would be any different than last, Schumer replied, “We’re trying.”

The mix of progressive priorities and a fragile majority in the Senate have always meant the bill has existed in a precarious balance. Yesterday, climate hawks on and off Capitol Hill were mulling the Biden administration’s next steps to support the legislation’s revival, specifically the environmental provisions.

One such off-Hill advocate, Lena Moffitt, campaigns director for Evergreen Action, said that she was left puzzled at Biden’s course of action for “Build Back Better.” “The fact that the speech left us wondering is a missed opportunity, because [climate change is] the existential question of our time,” she said.

In a roughly 70-minute speech, Biden only uttered the word “climate” twice and gave one passing nod to the cause of “environmental justice.”

Rather than specifically endorse policies to meet his administration’s target of reducing emissions 50 to 52 percent under 2005 levels by 2050, he promoted bipartisan environmental proposals like building more electric vehicle charging stations and replacing lead pipes.

And instead of calling climate change an “existential crisis” — a characterization he has freely used in the past — Biden framed the advancement of energy efficiency measures as a salvo to inflation rather than a means by which to save the planet.

He mentioned components of the “Build Back Better Act” he’d like to see Congress act on, but never mentioned the bill by name, or committed to passing the stalled bill’s historic investment in climate programs. It was a particularly jarring omission for Moffitt.

“It just was such a short reference to an incredibly popular piece of legislation that the American people want to hear about and want to see passed,” she said.

Lauren Maunus, the advocacy director of the Sunrise Movement, an environmental group founded by and speaking for young progressives, said she cared less about Biden’s failure to name-check the reconciliation bill than she was his scant messaging on the climate crisis.

“We were all extremely angered and upset and saddened by the absence of urgency on climate from the president,” she said, “paired with … his commitment to open the Strategic Petroleum Reserves and actually commit to doubling down on more oil and gas rather than the direction of his previously stated climate goals.”

A ‘quite unpopular’ label

Not everyone was critical of Biden’s handling of the issue. Senate Democrats yesterday were largely unfazed by the president’s choice not to endorse by name the “Build Back Better Act” or wade into the partisan elements of climate politics.

“I thought it was smart, although I don’t stipulate to the name of it,” Schatz said. “It’s not ‘Build Back Better.’ It’s ‘Infrastructure 2.0.'”

Sen. Angus King, a Maine independent who caucuses with Democrats, agreed there was a strategy in not naming a bill that has become politically polarizing.

“I don’t think it would have done any good,” King said. “What he did was talk about the specifics, which are quite popular, rather than the label, which is quite unpopular.”

Tiernan Sittenfeld, senior vice president for government affairs with the League of Conservation Voters, also didn’t fault Biden for tying the need for climate action to economic pressures rather than the planet’s survival, the latter of which she said was by now an obvious reality.

“I think we can and need to talk about the fact that the climate crisis touches everything … the economic impacts are really significant,” she said. “As people are feeling the pain, whether at the gas pump or in higher energy prices, it’s important to be responsive to the hurt and the expenses that people are feeling, and make clear that climate solutions are win-win-win.”

Ultimately, whether or not that’s possible depends on Manchin and fellow moderate Sen. Kyrsten Sinema (D-Ariz.), who has opposed corporate tax rate hikes that Manchin wants to use for revenue.

But despite the ongoing situation in Ukraine, the climate portion of “Build Back Better” has for months been relatively noncontroversial. Sen. Sheldon Whitehouse (D-R.I.) pointed out that Manchin has not opposed most of the important emissions-reducing provisions — the $300 billion in clean energy and EV tax incentives from the Senate Finance Committee.

For now, Whitehouse said, Manchin is leaving the door open to “a significant piece of climate legislation.”