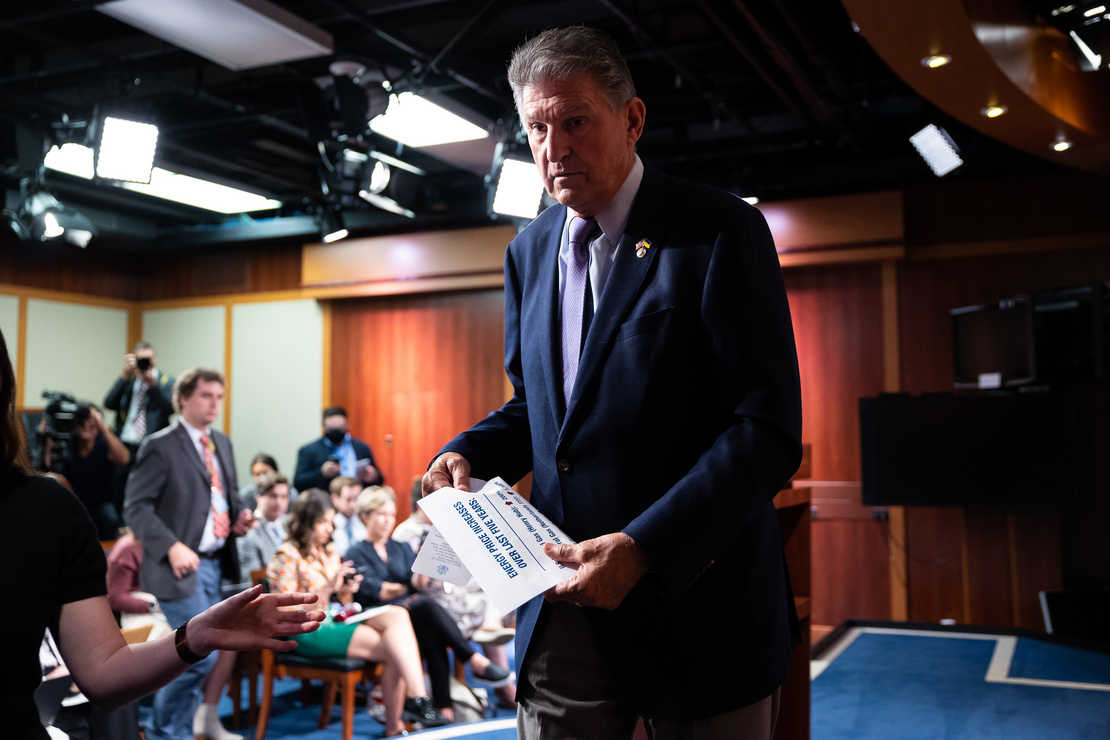 Senate Energy and Natural Resources Chair Joe Manchin is decrying forces aligning against his permitting overhaul effort, a sign of the long odds the legislation likely faces in passing Congress.

The bill, long sought by the energy industry, is expected to be released later today.

“I got to be honest with you, I’ve been around for a long time in state and federal politics, I’ve never seen stranger bedfellows than the Bernie Sanders and the extreme liberal left siding up with Republican leadership in Congress,” Manchin (D-W.Va.) said of opposition to the plan Tuesday. “I’ve never seen this.”

He added, “It’s revenge toward one person — me.”

Manchin’s comments on what he called “revenge politics” reflect the growing sentiment on Capitol Hill that the permitting plan won’t move on stopgap spending legislation, due by Oct. 1, as the West Virginia Democrat and his allies had hoped.

While no lawmakers declared the legislation dead, they acknowledged both policy and political differences are complicating the effort, which might not be settled until after the November election or even into the next Congress.

“I think the situation he’s in right now is entirely of his own making,” said Senate Minority Whip John Thune (R-S.D.), who like most Republicans has expressed frustration with Manchin for supporting the Democrats’ Inflation Reduction Act only after being promised a future vote on the permitting bill.

Thune said it’s unclear if the Manchin proposal could get the support of 10 to 12 Senate Republicans needed to move the bill as part of the stopgap without the threat of a filibuster. Sixty votes are needed to advance most legislation in the Senate with each party controlling 50 seats.

Senate Majority Leader Chuck Schumer (D-N.Y.) said yesterday he still planned on adding the permitting bill to the government funding bill, known as a continuing resolution, and getting it passed by the end of next week. He said he hoped Republicans would get behind it, too.

Sen. John Kennedy (R-La.), the chamber’s top GOP energy appropriator, said he may back permitting reform on the CR depending on what’s proposed. But he acknowledged there’s “no question” that some GOP senators are mad at Manchin over the deal on the Inflation Reduction Act.

“I think my side learned a good lesson in dealing with Manchin: You never let a dog guard your food, he’ll eat it,” he added.

‘Duel of the black hats’

House progressives, including some who signed a letter last week warning they could vote against a CR if it carried permitting reforms, sought to play down any personal differences with Manchin as the reason they would fight it.

“I am not going to get into a duel of the black hats with Mr. Manchin or anyone who says that we are taking out a personal vendetta. That’s not true,” said House Natural Resources Chair Raúl Grijalva (D-Ariz.), who has led progressive opposition that he said is rooted in concerns the Manchin plan would gut bedrock environmental laws.

Rep. Kathy Castor (D-Fla.), the chair of the House Select Committee of the Climate Crisis, said she is not ruling out supporting the bill and it riding on the CR provided it contains the right permitting changes. She said she wants reforms that would speed up permitting for renewable energy projects that could help to reduce carbon emissions.

House Transportation and Infrastructure Chair Peter DeFazio (D-Ore.), who joined with progressives in saying it should not be on the CR, said he personally likes Manchin and was not opposed to the deal to spite him. He said he’s concerned that the emerging proposal has been negotiated behind closed doors in the Senate with no House input.

Idaho Republican Rep. Mike Simpson, a senior appropriator, said that Manchin had a point about the unusual alliance between progressives and Republican leadership, but said the emerging opposition is ultimately the result of his failing to release it sooner.

“It is strange bedfellows, but it’s kind of [his] fault,” said Simpson. “Did you actually show us a bill? You can’t ask people to sign up and say, ‘I’m all for that,’ without text.”

House Majority Leader Steny Hoyer (D-Md.) said the House and Senate already have the votes to pass a “clean” CR without the permitting legislation added. He said he was still waiting to see what was in Manchin’s proposal before deciding how it might move.

Rep. Henry Cuellar (D-Texas), a moderate who supports many of Manchin’s expected reforms, still holds out hope for a deal and said attaching permitting provisions in the CR could force the hands of lawmakers on both sides of the aisle.

“Would they vote to shut the government down? I’m not so sure,” said Cuellar.

If Manchin is unable to attach his permitting package to the CR, it is possible that the annual National Defense Authorization Act could be seen as the next option to get the package passed before the end of the year.

“They’ve been talking about it,” Senate Armed Services Chair Jack Reed (D-R.I.) said when asked about the possibility of permitting reform being included in the defense bill. “They’re looking for any place for it.”

The defense package is seen as must-pass legislation that often gets significant Republican support. At the same time, many liberals opposed to permitting reform often vote against the NDAA.

Schumer announced Tuesday that the Senate would be in session for at least part of October to debate the NDAA. Both the House and Senate were supposed to be in recess ahead of the midterms.

Schumer said, “We will be meeting in October. NDAA will be part of what we do,” with a roster of pending nominees likely another priority.

House Armed Services Chair Adam Smith (D-Wash.) said, “Once we get to the end of the session, every idea in the world is considered to be put in the NDAA.”

Smith said he had not heard any discussion of potentially attaching Manchin’s bill to the NDAA. He said the decision would ultimately get made by party leaders.

“It’s the first I’ve heard about it, and I don’t like that idea,” said Inhofe.