Manchin revives climate deal: What’s in the $369B bill 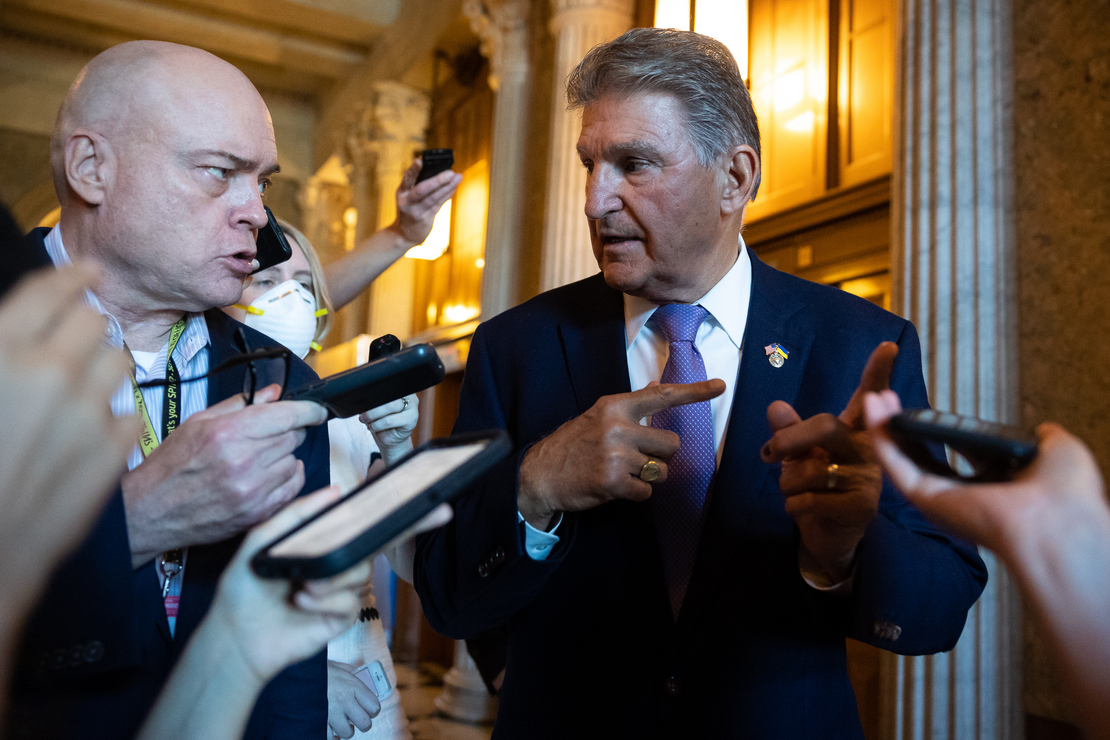 It would be the biggest and most consequential climate change bill ever passed by Congress and would be part of a larger agreement on a party-line budget reconciliation bill that also includes health care provisions and tax hikes on the wealthy.

Two weeks ago, Manchin (D-W.Va.) had said he would not support a bill with clean energy and tax provisions while inflation remains at 9.1 percent, but he kept the door open to further negotiations.

Yesterday’s agreement — which he dubbed the “Inflation Reduction Act of 2022” — revives the climate bill once more after a year of pained negotiations.

“I am pleased to report that this will be, by far, the biggest climate action in human history,” Sen Brian Schatz (D-Hawaii) said in a statement.

If Democrats are able to pass it, the deal would be a massive boon for the nation’s pledge to halve greenhouse gas emissions by 2030 and for the climate policies President Joe Biden ran on in 2020.

Schumer (D-N.Y.) plans to attach the clean energy and tax deal announced yesterday to an existing agreement on drug pricing and health care and hold a vote on the reconciliation bill next week.

First, it will have to clear the Senate parliamentarian, an arduous process that determines whether each provision fits the strict budget rules governing reconciliation. Then, the bill will be subject to a lengthy amendment procedure in the Senate known as “vote-a-rama.”

The deal includes a prodigious set of tax incentives for renewables, hydrogen and nuclear, as well as credits for clean vehicles. Manchin spent months trying to knock electric vehicle provisions out of negotiations, but the final deal offers thousands in incentives for the purchase of EVs and other types of commercial clean vehicles.

In a concession to Manchin’s desire to keep fossil fuels afloat, the bill would mandate offshore oil and gas lease sales in the Gulf of Mexico and off the coast of Alaska.

Manchin and Schumer also agreed to advance permitting reform in a separate bill this fall. That could draw support from Democrats, as well as some Republicans, who have long been interested in cutting down permitting times for clean energy and infrastructure across the board.

The idea is to attach it to a potential government funding deal or stopgap spending measure at the end of the fiscal year, according to a person familiar with negotiations who was not authorized to speak publicly.

“President Biden, Leader Schumer and Speaker [Nancy] Pelosi have committed to advancing a suite of commonsense permitting reforms this fall that will ensure all energy infrastructure, from transmission to pipelines and export facilities, can be efficiently and responsibly built to deliver energy safely around the country and to our allies,” Manchin said in a statement yesterday.

Senate climate hawks gave the deal their signature of approval after an evening caucus meeting yesterday to discuss it.

“For the first time, the tax code is going to reward emissions reductions, and encourage the development of new clean energy technologies as soon as they come online,” Senate Finance Chair Ron Wyden (D-Ore.) said in a statement last night.

Democrats also sounded an optimistic note about getting moderate stragglers on board. Sen. Kyrsten Sinema (D-Ariz.) over the past year has opposed efforts to raise corporate tax rates — which would be set to a 15 percent minimum under the agreement — while in the House, some Democrats have demanded the inclusion of state and local tax deductions.

“She will have to make a decision, but I know that her concerns were kept in mind when putting this together,” Sen. Debbie Stabenow (D-Mich.) said when asked about Sinema last night. Stabenow noted that Sinema has been “a strong supporter of the climate provisions.”

A spokesperson for Sinema said yesterday that she did not currently have a comment, and “she’ll need to review the text.”

Taken as a whole, the bill would be an enormous win for clean energy. It includes much of what had been under negotiation since this time last year.

Schumer’s office said the bill would reduce greenhouse gas emissions roughly 40 percent by 2030, in line with Democrats’ previous estimates for the original “Build Back Better Act.”

Clean energy tax credits are the centerpiece. Under the deal, existing renewable credits would be extended. After 2025, they would become technology neutral and based on greenhouse gas emissions reductions.

“Importantly, this is permanent energy policy,” Wyden said. “Congress will no longer need to extend these incentives every few years, giving companies and states certainty to plan clean energy projects and create jobs.”

Existing nuclear power plants would get a new production tax credit, while the popular 45Q credit for carbon capture and storage would be expanded and extended.

For clean vehicles, the bill would offer a $4,000 credit for used cars and up to $7,500 for new cars, with limitations based on materials and income levels.

The program would put a fee on excess methane emissions — rising to $1,500 per metric ton by 2026 — and offer up to $850 million in grants to industry to monitor and reduce methane.

Other provisions include a $10 billion investment tax credit for clean energy manufacturing, some $9 billion for clean federal procurement and more than $20 billion for climate-smart agriculture, according to a summary circulated by Democrats.

For environmental justice, the bill would dole out $3 billion for climate justice block grants and $3 billion to reduce air pollution at ports.

The $27 billion green bank, known as the Greenhouse Gas Reduction Fund, is also a significant chunk of money to support zero-emissions technologies and low-income communities.

“This will serve as a force multiplier for the development and deployment of green technologies, with an emphasis on environmental justice communities,” Sen. Chris Van Hollen (D-Md.), who authored the original green bank legislation, said in a statement last night.

Democrats at large were caught off guard last night when news of the deal began to trickle around Capitol Hill as lawmakers in both the House and Senate held evening votes.

Despite the lack of details, excitement, confusion and enthusiasm clearly radiated from Democratic senators as they attempted to make sense of the news.

“There were hints, but nobody wanted to say anything until it was landed,” Sen. Sheldon Whitehouse (D-R.I.) told reporters. “So it’s good that it’s landed.”

Notably, yesterday’s announcement came directly after the Senate passed the innovation and competitiveness bill known as “CHIPS and Science.” Senate Minority Leader Mitch McConnell (R-Ky.) had threatened to sink that bipartisan legislation if Democrats moved forward with the reconciliation bill.

Senate Republicans yesterday downplayed any connection. But House Republicans began whipping their members last night to vote against the “CHIPS” bill when it comes to the floor tomorrow.

For Democrats, it will be a hectic few days as the Senate looks to finish up before it leaves for recess next week.

Biden said he had spoken to Schumer and Manchin yesterday and offered “support for the agreement they have reached on a bill to fight inflation and lower costs for American families.”

“We will improve our energy security and tackle the climate crisis — by providing tax credits and investments for energy projects,” Biden said in a statement. “This will create thousands of new jobs and help lower energy costs in the future.”

Ultimately, it could mean both chambers of Congress will be in session next month, when they’re scheduled to leave town for the summer, but that prospect did not seem to be a problem for Senate Democrats yesterday.

The announcement came after a painful two weeks for climate advocates, many of whom had resigned themselves to another congressional failure.

Manchin had chipped away at their proposed policies, including the $50 billion Clean Electricity Performance Program, over the last year. Eventually, he killed the “Build Back Better Act,” which contained $555 billion in clean energy investments, in December.

But he came back to the table this year to negotiate a much slimmer bill privately with Schumer, reviving hopes that climate could still make it through.

Then, on July 14, people involved in the talks revealed that Manchin had rejected the climate and energy and tax provisions after the latest round of inflation numbers. In essence, Manchin said he wanted to wait, and Schumer decided to continue immediately with a reconciliation measure containing only drug pricing and health care policy.

But the next day, Manchin insisted he was still willing to talk. “As far as I’m concerned, I want climate. I want an energy policy,” he said (Greenwire, July 15).

Many Democrats, put simply, did not believe him and proceeded like the bill was dead. They began calling for a climate emergency and other executive actions. Indeed, progressives yesterday held a press conference to push Biden on the emergency declaration.

But in the Senate, some Democrats, including Wyden and Sen. John Hickenlooper (D-Colo.), wanted to keep negotiations open and implored Manchin to think of the climate provisions as deflationary.

“Last week @Sen_JoeManchin repeatedly said he wasn’t walking away from the table and he understood the importance of these negotiations,” tweeted Manchin spokesperson Sam Runyon. “Today’s announcement is not a reversal of anything.”

The Washington Post also reported yesterday that Senate Democrats had involved former Treasury Secretary Lawrence Summers, a sometime critic of the Biden administration’s policies who discussed with Manchin the impacts the package would have on prices.

“I’m proud my colleagues refused to give up the fight, even when the odds were long,” Hickenlooper said in a statement yesterday. “We worked around the clock to prove that clean energy investments will fight inflation.”

Schumer, for his part, thanked Manchin for his “willingness to engage and his commitment to reaching an agreement that can earn the support of all 50 Senate Democrats.”

Progressive green groups are not happy that Democrats made fossil fuel and permitting concessions to Manchin. But for most environmentalists, the benefits far outweigh the negatives.

Leah Stokes, a University of California, Santa Barbara, professor and climate advocate, noted that the deal contains roughly four times the level of clean energy investment that was in the American Recovery and Reinvestment Act, the 2009 stimulus bill. It’s a “10-to-1 ratio” of good to bad, Stokes said in an interview.

“We know what it feels like to lose. That was the last two weeks of our lives,” Stokes said. “We need to get these investments across the finish line.”