Manchin says climate bill risks inflation. But does it? 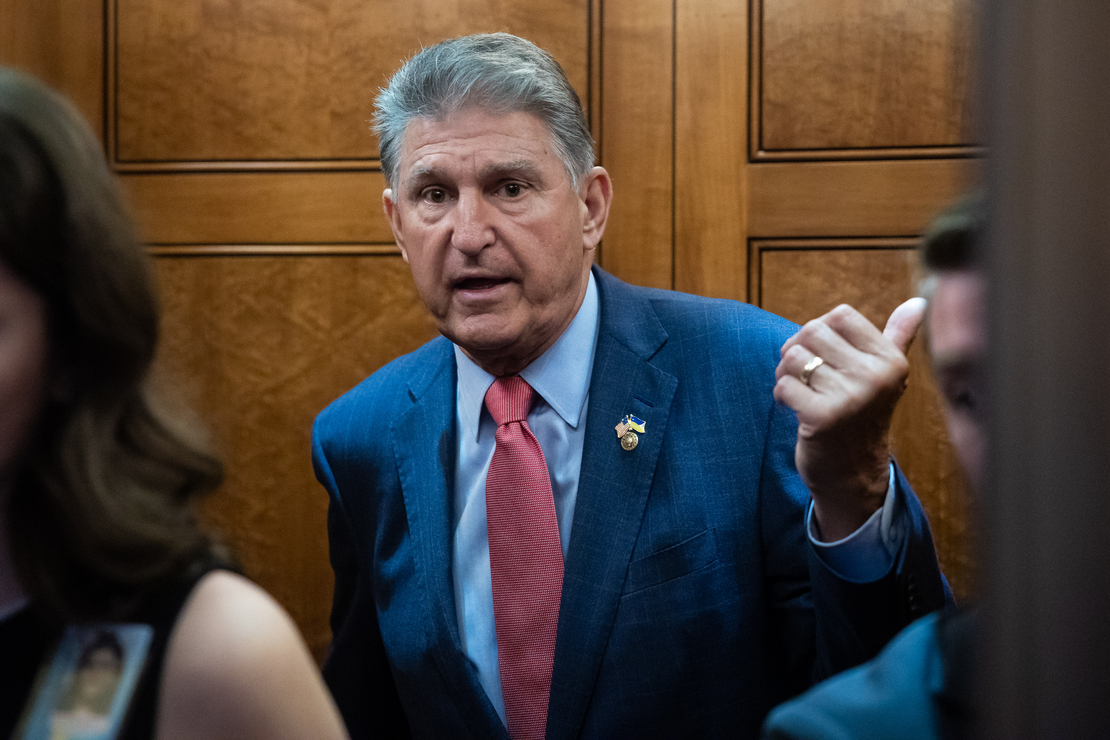 When Sen. Joe Manchin walked away last week from negotiations over the energy and climate spending package, he blamed inflation.

He used the same justification to blow up a larger climate and social spending bill in December. But the conservative West Virginia Democrat hasn’t said much about why he believes such legislation — which includes incentives for wind and solar energy, hydrogen and electric vehicles — would cause consumer prices to rise more steeply.

But many economists say the kinds of policies Democrats are pursuing would actually relieve pressure on consumers, not add to their burden.

Boosting green technologies for transportation and power, they said, would have sent a signal to the fossil fuel industry that more competition is on the way. And the final package would have raised twice the revenue it spent in the form of taxes, at Manchin’s insistence. That, in turn, would have taken money out of the economy at a time when too many dollars are chasing too few products, paying down federal debt in the process.

Steve Cicala, an economics professor at Tufts University, said the original “Build Back Better” package — as President Joe Biden’s proposal was once called — came with political framing that lent itself to charges that it would overheat an already boiling economy.

Biden first offered the proposal during the 2020 presidential campaign as a way to stimulate the economy, and it featured provisions aimed at benefiting union labor and other Democratic priorities that might have led federal dollars to flow to more expensive products and services, Cicala said.

But the core provisions of the $375 billion energy and climate package Manchin abandoned last week would not have been “at all inflationary,” he said.

“The credits to increase the production of electricity from renewable sources would lower the price of electricity — not raised it — at a time when coal and natural gas and oil are at very high prices,” Cicala said. “A policy that encourages the production of fuels that don’t use those inputs is going to be beneficial for consumers and lower prices overall.”

“So, there’s really no way of spinning that as an inflationary policy,” he said.

Manchin ended months of negotiations over a scaled-back climate spending package last week when he reportedly told Senate Majority Leader Chuck Schumer (D-N.Y.) that he would only back much narrower spending on prescription drugs and health care.

He has since signaled some renewed willingness to engage on climate. But in a radio interview the day after news of his defection broke, he argued it would be “prudent” to wait to see inflation figures for July before acting. The June report showed a 9.1 percent rise in consumer prices over the past year.

Manchin’s office did not respond to calls for comment for this story.

But economists say provisions Manchin succeeded in attaching to the Senate bill would help bring down prices. The budget package Manchin and Schumer were working on would have raised twice as much revenue in the form of taxes on corporations and rich individuals as it spent on federal programs like production and investment tax credits for wind, solar, nuclear and hydrogen. Put another way, it would have taken twice the money out of the economy over the next ten years that it put into it.

“If it is more than fully financed by taxes, then it is disinflationary,” said Barry Eichengreen, a professor of economics and political science at the University of California, Berkeley.

“Moreover, even were it not fully financed, by the time the additional spending by electric vehicle buyers, investment in renewables and carbon capture and so forth begin to come on stream next year and after, the Fed will have brought inflation down from its current high level,” Eichengreen added. “One can make an argument that the Fed will have to take stronger action than otherwise if there is an additional $300 billion of spending. But that’s an argument that interest rates will be higher with the package than without it, not that inflation will be higher.”

The stalled climate bill wouldn’t have injected federal funds into the economy all at once, as did the pandemic-era stimulus bills of the last two years. Rather, it would have issued the tax credits and incentives gradually over a 10-year window — with most of the credits disbursed toward the end of this decade.

The Joint Committee on Taxation projected that the uptake of energy tax credits in the House-passed “Build Back Better Act” would have ratcheted up gradually over the years, as investors planned projects, secured financing, and worked out siting and permitting issues for their new installations.

The House package would have spent $145 billion on renewable and low-carbon electricity through 2031. But expenditures in 2022 — the year after the House bill passed — were projected to be less than $6 billion. In 2031, they would grow to almost $45 billion.

“So, when you’re thinking about adding money to the economy, these clean energy tax credits don’t do that for a very long time,” said Xan Fishman, director of energy policy for the Bipartisan Policy Center. The Senate bill’s revenue raisers, by contrast, would have taken effect immediately and remained steady throughout the ten-year life of the bill.

“Especially in the first five years, it would reduce inflation,” said Fishman.

The Senate bill would have injected money into the economy over the next decade to help low-carbon technologies out-compete fossil fuels in both transportation and power generation.

It would have greened the power grid, while also spurring overall increases in power production from diverse sources, including wind, solar, nuclear and fossil fuels with carbon capture. The EV tax credit expansion — which Manchin called “ludicrous” early on in negotiations — would have boosted the share of U.S. vehicles that run on electricity instead of on gasoline.

“It’s really important to remember that we’re not simply fuel-switching,” Fishman said. “If we are going to electrify more and more, we’re going to need an absolute increase in the electricity that we’re producing.”

Greener power, more power and more electric-powered vehicles would mean less demand for gasoline at the pump and for coal and natural gas on the grid, energy experts and environmental economists say. That would pay climate dividends and also insulate U.S. consumers from price increases due to geopolitical shocks like the Russian war in Ukraine.

Annual average prices of Brent crude oil climbed from just over $70 a barrel last year to almost $107 a barrel so far this year. A major contributing factor was the loss of access to Russian supply as a result of Russian President Vladimir Putin’s war.

Most energy economists and policy experts say diversifying the sources of power and encouraging more supply has the potential to reduce fossil fuel prices and the cost to ratepayers overall. An RMI analysis released in May showed that expanding investment and production tax credits for renewable energy for ten years could save U.S. ratepayers $5 billion a year by 2024.

Efficiency also has a role to play.

John Coequyt, who leads the federal policy team at RMI, said the Democrats’ package could have taken fuller advantage of its potential to reduce demand, especially to benefit low-income consumers. But he said tighter fuel economy standards for vehicles have already played an unseen role in blunting the impact of this year’s gasoline price spike.

The Senate package also would have created a new production tax credit for hydrogen. Coequyt said that provision, which had Manchin’s backing, could have reduced the price of fertilizer by allowing hydrogen produced with renewable energy to displace gas as an input.

But fertilizer production uses gas to produce ammonia, and gas has become a global commodity as demand for liquified natural gas has grown, particularly in Europe.

“It’s very difficult to solve that global fertilizer problem with natural-gas-derived nitrogen fertilizer,” he said. “But if you can bring in renewable energy and produce it that way, then you get out of that fossil fuel price challenge and potentially put downward pressure on fertilizer prices, which are right now a tremendous challenge globally.”

Not all analysts agree that the Democrats’ climate spending bill would have brought down costs.

Mark Mills, a physicist and senior fellow at the conservative Manhattan Institute, said the tax increases for debt reduction that economists called deflationary would actually contribute to inflation. There aren’t enough rich Americans to finance ambitious programs, he said, and corporations would respond to increased taxes by passing them on to consumers in the form of higher prices.

“The economy doesn’t care if you steal from Peter to give to Paul,” he said. “Raising taxes to give people credits to buy something that’s more expensive is by definition inflationary. You’re just moving around where the money’s coming from, but that money has to come from somewhere.”

An influx of spending on green technology — be it wind turbines or solar equipment or EVs — would drive up demand for rare earth minerals and metals like copper, nickel and aluminum, he said. Even if growing demand causes green tech companies to look beyond rare earth minerals toward cheaper alternatives, the costs of those alternatives would shoot up, as would anything that is made with them.

Prices for wind and solar energy have edged up substantially in the United States since the end of 2020. Wind and solar producers say those increases stem from shortages in raw minerals, global supply chain problems and policy issues like Trump-era tariffs on foreign solar equipment.

But over the past 10 years, the cost of solar and wind power has fallen dramatically.

Still, even supporters of green energy deployment say there will be bumps in the road and price spikes as the world transforms its power grid.

“Once energy demand can increasingly be met with renewables, households will benefit from lower electricity prices,” Isabel Schnabel, a member of the executive board of the European Central Bank, said in a speech in Frankfurt in March. “The transition to this new steady state will not come for free, however.”

Schnabel likewise predicted that the transition would result in heavily increased demand for metals and minerals used to make renewable energy equipment, but also in the manufacture of other products.

“The faster and more urgent the shift to a greener economy becomes, the more expensive it may get in the short run,” she said.

But “greenflation” itself will ultimately play a role in transitioning the economy away from reliance on fossil fuels, a finite resource that depletes over time and that carries economic and national security risks, analysts say. That’s because high prices attract investment and encourage entrepreneurs to innovate by finding cheaper ways to do business and securing supply chains that ultimately bring prices down.

“I agree in part that, yes, of course, a lot of money thrown at one problem at one time may well lead to inflationary pressures,” said Gernot Wagner, a climate economist at Columbia Business School.

But that is driving more companies to start installing heat pumps, and fewer to service gas furnaces.

“So, you’re sending all the right signals, right?” he said. “That’s the beauty of the market.”