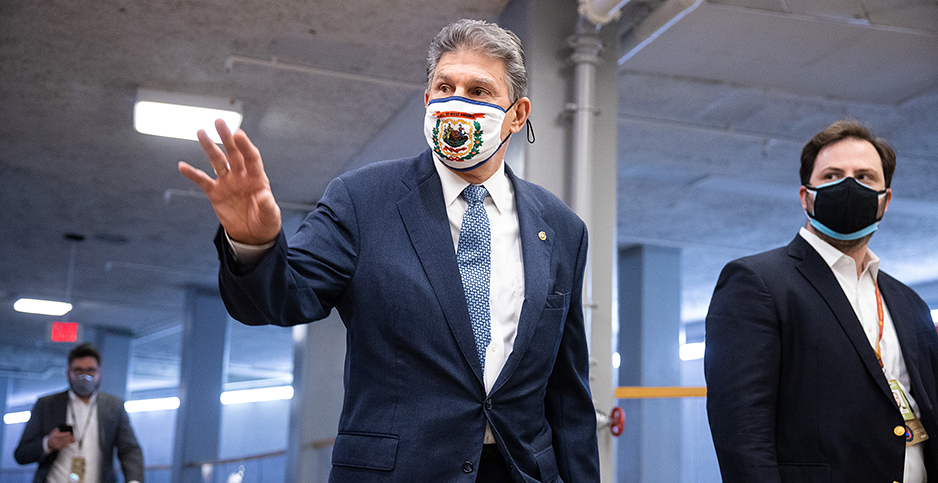 Two senior Senate Democrats introduced legislation this morning to make available as much as $4 billion in clean energy manufacturing tax credits for communities affected by coal mine or power plant closures.

Manchin has made the clean energy manufacturing incentive a priority for his chairmanship as he looks to protect West Virginia and other states long dependent on fossil fuels. And he’s likely to use it as a bargaining chip when Democratic leaders seek his support for broad climate action.

"Tax credits to help incentivize a transition to a cleaner energy future should be targeted to drive reinvestment in the communities who are most impacted by this transition, and that’s exactly what the ‘American Jobs and Energy Manufacturing Act’ does," Manchin said during a Zoom press conference.

The legislation would provide $8 billion for companies to make investments in manufacturing facilities that could increase domestic production of renewable energy, storage, electric vehicles, advanced nuclear reactors and carbon capture technologies. The Department of Energy would have a hand in determining which companies qualify.

Of that $8 billion, $4 billion would be specifically set aside for coal communities caught in the grips of energy market changes.

The legislation would also make the credit available to upgrade existing industrial facilities to reduce emissions. That could lead to wider adoption for carbon capture technologies at industrial plants — one of the four main drivers of greenhouse gas emissions in the United States.

The bill’s introduction comes as a White House task force on economic revitalization for distressed coal communities met for the first time Friday.

The 48C credit had initially been launched as part of the Obama administration’s recovery stimulus in response to the 2008 financial crisis that devastated manufacturing.

The incentive provided a 30% credit for investments in 183 manufacturing facilities for clean energy products across 43 states.

In total, the credit spurred $2.3 billion in federal investment and was eventually overprescribed 3 to 1 by companies seeking the incentive.

Companies across Michigan, for example, were able to build out facilities dedicated to semiconductors, battery parts and other electric vehicle components. Ford Motor Co. used the credit to retrofit a Wayne, Mich., plant to better meet electric vehicle needs.

"It’s not only the right time, but we know that it works because we used this 48C tax credit one other time," said Stabenow, who was an original author of the credit in 2009. "When we passed it, it just exploded. It was extremely successful."