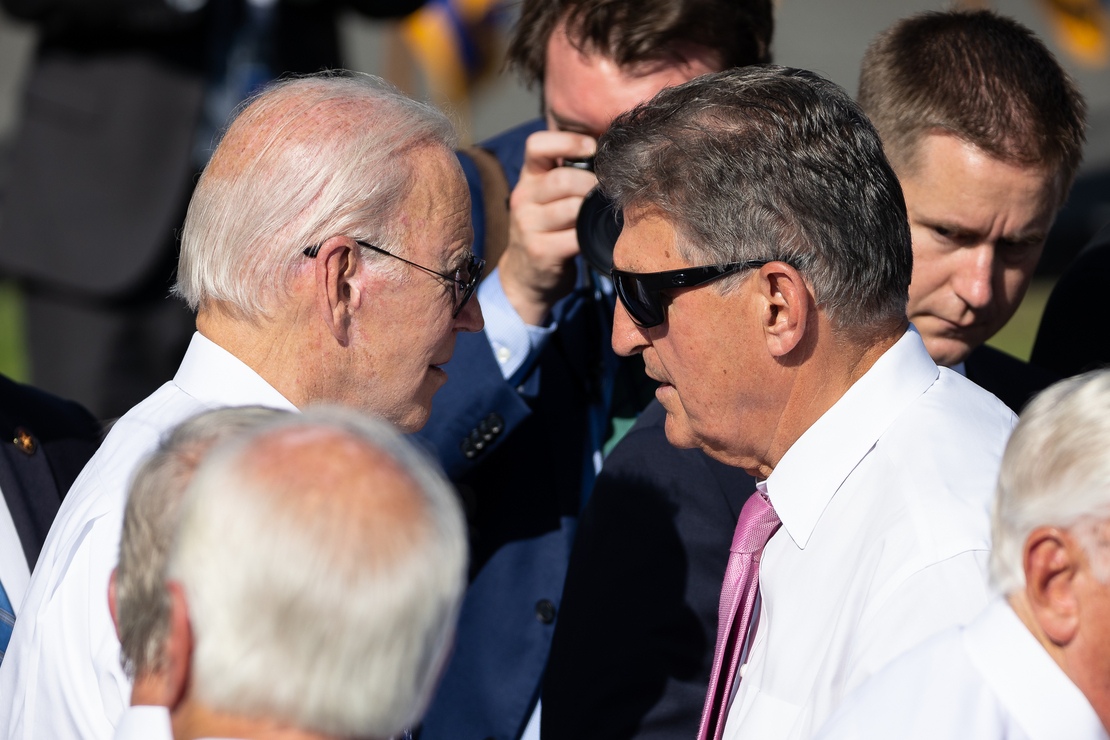 President Joe Biden greets Sen. Joe Manchin (D-W.Va.) and other lawmakers during a celebration of the Inflation Reduction Act on the South Lawn of the White House. Francis Chung/E&E News/POLITICO

Democratic Sen. Joe Manchin unleashed a broadside against President Joe Biden this weekend over the commander-in-chief’s comments on coal — an unprecedented intraparty attack just days before the midterm elections that will determine whether the Democrats continue to control Congress.

The chair of the Senate Energy and Natural Resources Committee was responding to remarks Biden made on Friday in Carlsbad, Calif., where he touted his administration’s promotion of clean energy and the energy transition away from fossil fuels.

Noting it was “now cheaper to generate electricity from wind and solar than it is from coal and oil,” Biden observed that “no one is building new coal plants” anymore.

“We’re going to be shutting these plans down all across the America,” Biden continued, and replacing them with “wind and solar.”

Manchin, whose state’s economy relies heavily on mining and coal-fired power, eviscerated the president over his comments in deeply personal terms.

“It seems his positions change depending on the audience and the politics of the day,” Manchin said.

“Let me be clear, this is something the President has never said to me. Being cavalier about the loss of coal jobs for men and women in West Virginia and across the country who literally put their lives on the line to help build and power this country is offensive and disgusting.”

The senator demanded Biden offer “an immediate and public apology.”

Biden’s press secretary, Karine Jean-Pierre, said Biden’s “remarks yesterday have been twisted to suggest a meaning that was not intended: he regrets it if anyone hearing those remarks took offense.”

Jean-Pierre said Biden was “commenting on a fact of economics and technology: as it has been from its earliest days as an energy superpower, America is once again in the midst of an energy transition.”

She also noted that while Biden was working to “combat climate change and increase our energy security by producing clean and efficient American energy … oil and natural gas production has increased” during the first two years of his presidency.

“No one will be left behind,” Jean-Pierre added.

Manchin spokesperson Sam Runyon said the senator would have no follow-up response to Biden’s statement.

Republicans seized on the rift between Manchin and Biden to attack other Democrats.

“Like almost every issue, John Fetterman and Tim Ryan are frauds when it comes to energy policy. Despite their lies on the campaign trail, they’re all in with Joe Biden to reduce domestic energy production, eliminate fossil fuels, end fracking and shut down coal plants,” Chris Hartline, a spokesperson for the National Republican Senatorial Committee, said in a statement.

“At least Joe Manchin has the balls to occasionally stand up to Joe Biden on energy,” Hartline said. “Can’t say the same about John Fetterman and Tim Ryan.”

Fetterman and Ryan are Democrats running for Senate from Pennsylvania and Ohio, respectively.

It’s not the first time Manchin and Biden have clashed in starkly personal terms.

Late last year, when Manchin walked away from an initial round of negotiations over the massive climate and social spending package that would become known as the Inflation Reduction Act, Biden’s team attacked Manchin for being duplicitous and disingenuous.

Since that time, Biden has taken care to court Manchin, sending his emissaries to West Virginia on fact-finding visits and investing millions in cleaning up abandoned mine land and plugging orphaned oil and gas wells.

But Manchin’s statement Saturday, in its rawness, accomplished more than to simply illustrate the depths of the ideological schisms within the Democratic Party: His words might also have served as a harbinger of how he plans to operate on Capitol Hill, both in the waning days of the 117th Congress and over the next two years, when he’s up for reelection in a conservative state.

A number of nominees for administration positions in the Energy and Interior departments still need to be confirmed before the end of the year, and Manchin could wield considerable power and influence over whether these nominations can advance.

Manchin has already showed, at the committee level, that he has no qualms about slow-walking nominees as leverage for getting the administration to commit to more domestic energy production in the form of oil and gas lease sales.

Manchin’s words might also have personal repercussions. Over the summer, when budget reconciliation negotiations again appeared on the verge of breaking down at Manchin’s behest, some of the senator’s Democratic colleagues began to question whether a powerful committee should be led by a lawmaker seemingly uninterested in playing with the team.

“We have an opportunity to address the climate crisis right now. Senator Manchin’s refusal to act is infuriating,” Sen. Martin Heinrich (D-N.M.), a member of the Energy and Natural Resources panel, tweeted at the time. “It makes me question why he’s Chair of ENR.”

Ultimately, Manchin returned to the negotiating table and helped secure enactment of the Inflation Reduction Act, but his undermining of the president on energy policy so close to the midterms could reignite chatter about Manchin’s future at the helm of the committee.

Furthermore, depending on the outcome of the Tuesday elections, Manchin will be closely scrutinized for signs that he might go so far as to defect from the Democratic Party entirely and become a Republican. Similar party switches among centrists have accompanied partisan power shifts in the past.

Runyon on Saturday declined to comment on Manchin’s next moves, even as the senator’s statement concluded with a seemingly ominous warning: “It is time [Biden] learn a lesson that his words matter and have consequences.”