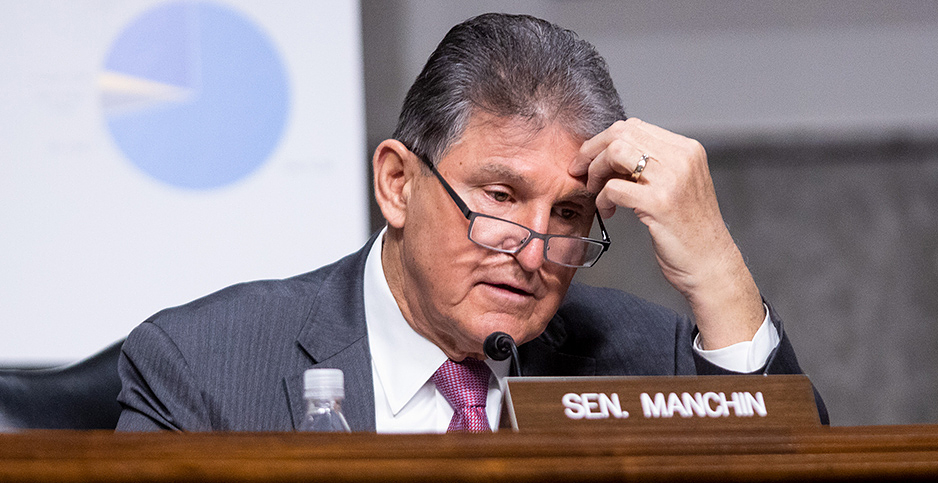 The Senate’s most-watched Democrat ripped into his own party yesterday, drawing red lines on energy policy and warning President Biden to rein in his base-pleasing progressive actions.

Sen. Joe Manchin (D-W.Va.) said he wants Biden’s agenda to pass with Republican support, but that the president has already endangered that prospect with his early moves, which included an array of executive orders on climate and a $1.9 trillion pandemic relief proposal.

"I think we’re in the position we’re into now because we started wrong. And I think Joe Biden’s advisers have led him wrong to start out in strictly a partisan direction," the newly minted chairman of the Senate Energy and Natural Resources Committee said during a Bipartisan Policy Center event.

Manchin’s comments came as Democrats push forward with the budget reconciliation process to approve Biden’s COVID-19 plan. The maneuver allows them to avoid a Senate filibuster.

"We should’ve found something that we could’ve voted on bipartisan first and then gone down this lane when … you hit a roadblock. And they didn’t do that," Manchin said. "I’m determined to make it bipartisan, because if we go off the rails and there’s no bipartisanship, you’re not coming back for two years."

Such concerns may have the potential to scuttle strong climate action, with Democrats also eyeing reconciliation to pass a green infrastructure overhaul.

Manchin vowed he would not be the 50th vote to back an aggressive carbon pricing proposal without a fuller conversation about how to transition the energy sector "in a responsible way."

"[If] they want to have a conversation on how we improve our climate and do it in a most responsible way, yeah, they’d have me in a heartbeat. [If] they want to talk about this as a penalty — forget it, as long as I’m here," he said.

Manchin used the same reasoning to explain his ongoing skepticism about the Paris climate agreement, in which each country sets its own nonbinding emissions reduction goals.

Biden rejoined the Paris Agreement on his first day in office, after President Trump in 2017 started the process of quitting the global accord.

Using an argument more often heard from Republicans, Manchin said the United States puts itself at a disadvantage by pledging to curtail fossil fuels while India and China continue to burn greater and greater amounts of coal.

"You want to do something globally? Put some [carbon] pricing on the globe. You want to say you’re into Paris, then here’s your penalty. Here’s your carrot and stick. Try this one on. Let’s see if you’re really doing it," Manchin said. "But don’t penalize [only the United States]. Don’t shoot me in the foot and [tell me], ‘You’ll like it, do it.’"

Manchin has long voiced skepticism about invoking an aggressive carbon pricing policy. He famously shot a copy of the Waxman-Markey carbon cap-and-trade legislation as part of an campaign ad.

But the coal-state lawmaker has started to evolve on targeted energy innovation investments as one way the federal government can intervene to help address emissions.

He, along with Sen. Lisa Murkowski (R-Alaska), helped attach some $35.2 billion in clean research and development energy spending authorizations as part of the pandemic relief and appropriations omnibus package last year.

Manchin says he remains a committed supporter of an infrastructure package, going so far as to suggest Biden should have started with a bipartisan attempt in that policy arena. Even still, Manchin cautioned against proceeding without finding a way to pay for it.

"First of all, what’s the public willing to pay for a large infrastructure bill?" Manchin asked. "People talk about conventional roads and bridges, and they think, well, it’s going to be highway taxes or gasoline taxes. That’s not going to do it."

Manchin floated the use of a value-added tax imposed on the entire public as a way to sponsor some $5 trillion to $6 trillion in infrastructure spending.

A 0.5% or 0.75% VAT has been part of congressional tax debates for years. Some economists argue it’s a regressive tax structure, with the poorest being hardest hit.

"That’s how you pay for it, because there’s not a person living in America who doesn’t use infrastructure," Manchin said yesterday.

An infrastructure package could even include a climate title, Manchin said. "If you want climate, climate could be right in there," he said.

"That could be part of the infrastructure, absolutely, because you know what? We all benefit from it. But you have to be realistic; how many votes do you think they would get?"

Climate infrastructure, like transmission line build-outs, has long been on the wish list for Democrats and climate advocates. Delays in permitting have created renewable energy bottlenecks that could prevent the penetration of clean energy into the grid.

Some advocates have called for greater use of the federal government’s preemption abilities to get transmission pathways permitted and constructed.

Manchin said one way to help deploy energy infrastructure is to introduce more buy-in for communities affected by transmission lines or pipelines.

"If the utility companies or the pipeline companies and everybody else would share some of the revenue that passes through that line, and share it with everyone else — the states and the counties that it goes through — you’d cure that problem like that," Manchin said.

"No one wants to share. They say, ‘You have to have it, so let us do it’ or ‘We need eminent domain; oh yeah, let’s go ahead and do it because it’s for the public good,’" he added.

"If it’s for the public good, then share a little of your revenue with them, and I guarantee you, it will save you a lot on the back end."