Manchin’s focus on pipelines may equal his love of coal 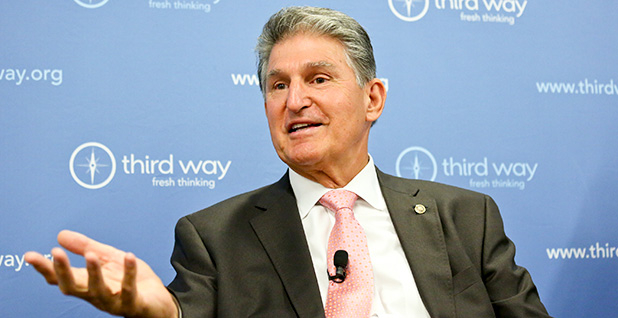 Sen. Joe Manchin (D-W.Va.) has always been vocal about coal but will soon be overseeing a host of issues, including growing disputes over climate. Third Way Think Tank/Flickr

The newest lawmaker to lead Senate Democrats on top of the Energy and Natural Resources Committee has faced criticisms from environmental groups about his strong support of coal, but his positions on the permitting and build-out of natural gas and oil pipelines may prove more consequential during the coming two years.

That turnabout for Sen. Joe Manchin (D-W.Va.) mirrors a broader shift for his home state, as West Virginia becomes as much a natural gas state as a coal state in the new market reality for fossil fuel use.

The focus may also align him with a broader Trump administration push to streamline the permitting process for new pipeline construction — a prospect sure to rile his fellow Democrats and environmental groups that have long opposed new fossil fuel infrastructure projects such as Keystone XL or Dakota Access in part for their climate implications.

"We want to move the product that people are desiring, that’s all," Manchin said of his support for a pipeline build-out. "I want to make sure everyone’s voice is heard. Make sure all the t’s are crossed and i’s are dotted, and just see what happens from there. But the law is the law."

Coal has been king in West Virginia for much of the past century, but as the U.S. Energy Information Administration projects, coal demand is likely to decline in the coming years despite President Trump’s best efforts. This is mainly due to the market dynamics from an onslaught of cheap natural gas — some of which is coming from West Virginia.

At the center of Manchin’s support are two pipelines mired in legal and grassroots opposition: the Atlantic Coast and Mountain Valley pipelines. Those two projects have the potential to be economic drivers in West Virginia, connecting portions of the Marcellus Shale to North Carolina.

But environmental activists and concerned local landowners have thrown legal speed bumps at the project over objections about the thoroughness of the environmental review process of various federal agencies. The federal courts have tended to agree with those assertions, pausing construction.

Those delays have enormous economic consequences for Manchin’s home state.

According to an economic report put out by the U.S. Chamber of Commerce’s Global Energy Institute last month on the impacts of "keep it in the ground" advocacy, should the Atlantic Coast pipeline not go forward, state and local governments could lose out on a windfall.

Specifically, some $500 million in tax revenue, $377 million in consumer energy savings and a potential loss of 21,000 jobs with some 3,000 active construction jobs are in the crossfire.

Those numbers prompted the West Virginia Chamber of Commerce to press Manchin to do all he can to help the pipeline project move forward in a Dec. 20, 2018, letter.

"It is of the upmost importance that we find ways for these energy projects to be cleared for continued construction," West Virginia Chamber President Steven Roberts said in the letter. "Our nation’s energy security depends on it, and our citizens and state need the economic development it will bring."

Manchin has already been active in making sure federal agencies are focused on meeting the court’s demands for the pipelines.

Manchin has also been vocal about the need for build-out infrastructure to move Marcellus Shale natural gas to the New England market, which has increasingly become dependent on the fuel. State governments in the region, however, have become more environmentally conscious and have prevented build-outs of interstate pipelines, citing climate and water quality concerns.

"If we are going to import, why don’t we import from the United States?" Manchin asked during a Nov. 29, 2018, Energy Subcommittee hearing about U.S. energy independence. "We got a lot of gas. We are trying to get the pipeline through, we’re trying."

For industry, the ascension of Manchin to the top Democratic spot will likely provide positive returns for pipeline developers looking to streamline the permitting process through legislative changes.

"Sen. Manchin comes from an energy-producing state," Donald Santa, president and CEO of the Interstate Natural Gas Association of America, said during a roundtable with reporters.

"While West Virginia has historically been looked at as a coal state, it is part of the Marcellus," he added. "It is a natural gas state now, and so I think having a ranking member there who has a state that is affected by that and has seen the benefits of the abundance of natural gas is a positive thing."

That support may come in handy for pipeline developers as Congress is likely to consider some form of an infrastructure package with an energy title — one of the few areas where Democrats and Republicans may be able to find common ground in a split government.

There could be other areas where industry sees a benefit: The committee’s work with the Federal Energy Regulatory Commission could be a plus as well.

ENR is set to consider at least one new commissioner in the coming months, with the death of former Chairman Kevin McIntyre. A second commissioner opening could open as soon as July.

Those new commissioners and the Senate oversight of the positions may prove critical to a host of pending pipeline and export applications that have been caught in FERC’s voting deadlock between the Republican and Democratic commissioners.

FERC has also launched a review of its natural gas pipeline permitting process.

Manchin’s ascension has alarmed some in the environmental community in part due to his long history of supporting the coal industry.

Those previous ties prompted protests and calls for Minority Leader Chuck Schumer (D-N.Y.) to block Manchin’s new leadership post as the Democratic caucus moves closer to the "Green New Deal" than "all of the above" touted by the White House.

The concerns have applied to the pipeline build-out too, key ACP and MVP opponents say, although they are willing to give him the benefit of the doubt as he gets up to speed on the issues.

"Manchin has a clear obligation to oppose the build-out of any new fossil fuel infrastructure projects," said Lukas Ross, a senior policy analyst with Friends of the Earth. "He’s no longer just representing himself but his caucus at large, which is moving in the direction of bold climate action as seen in the ‘Green New Deal.’"

He added, "At a certain point, that’s going to require him to break from previous positions he has held."

Manchin has remained steadfast in his belief that energy development can mesh with environmental stewardship. He has urged groups wary of his post to meet with him, and he has promised a collaborative approach to energy issues.

He even voted against controversial FERC nominee Bernard McNamee because of his previous comments downplaying man-driven climate change.

Those olive branches have been enough to appease environmental groups for the time being. That may give time, some say, for groups to offer their perspectives on the pipeline issue.

"The Southern Environmental Law Center looks forward to working with Sen. Manchin to educate him about our concerns with these pipelines and their implications for his state and others in their path," SELC spokeswoman Claudine Ebeid McElwain said in an email.