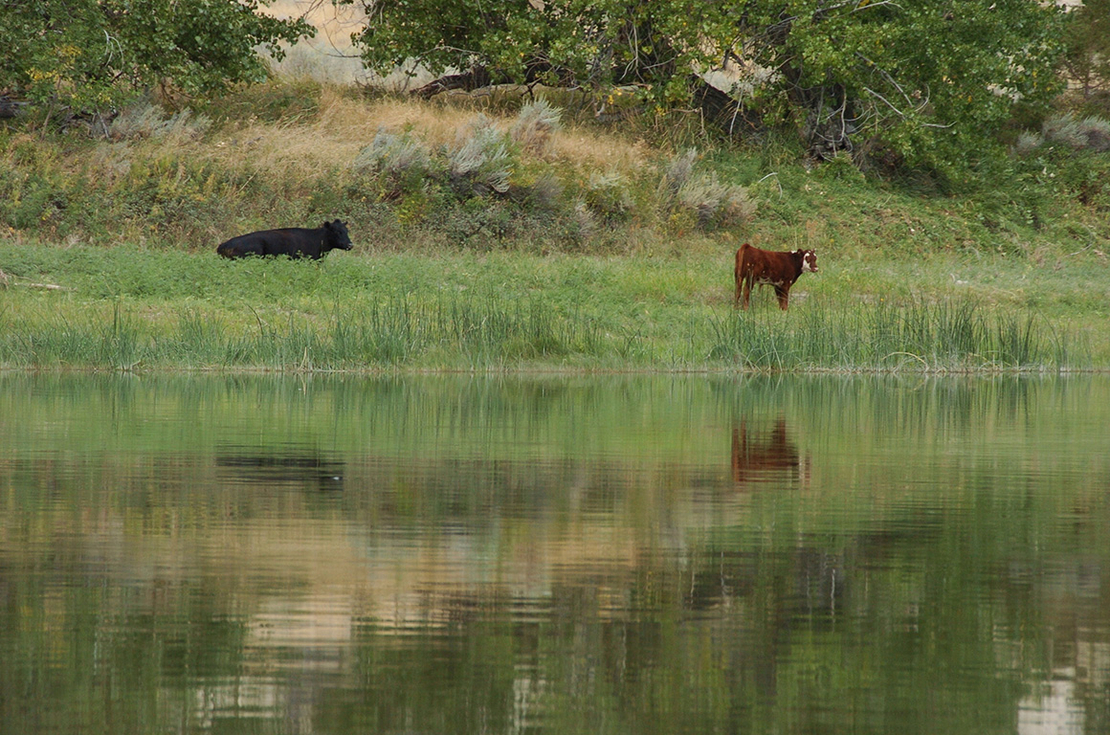 Cows grazing in 2011 along a section of the Missouri River that includes the Upper Missouri River Breaks National Monument near Fort Benton, Mont. Matthew Brown/AP Photo

The Bureau of Land Management is failing to conduct an environmental analysis before renewing many livestock and sheep grazing permits across millions of acres of public lands in the West, an environmental advocacy group says.

Western Watersheds Project says its analysis of federal data shows that last year, more than half — 54 percent — of federal grazing allotment permit renewals were authorized by BLM without conducting site-specific environmental analysis of the rangeland as mandated by the National Environmental Policy Act.

The result is likely degraded federal rangelands, affecting everything from the survival of greater sage grouse habitat to the health of congressionally designated wilderness areas, argued the group, which has opposed livestock grazing on federal lands.

WWP officials said they shared the data earlier this month with BLM Director Tracy Stone-Manning, as well as Deputy Director of Policy and Programs Nada Culver, along with other senior bureau officials.

“Essentially, the Bureau of Land Management … has been failing to manage grazing on public lands to a large extent,” said Josh Osher, WWP’s public policy director, during a Zoom call with reporters. “The bureau has largely failed to comply with the law, and has a massive backlog of permits that don’t have current NEPA analysis and don’t have current land health evaluations.”

BLM did not respond to a request for comment in time for publication.

But, she added, “to say that range conditions aren’t being monitored is blatantly false. Ranchers and grazing permittees engage in regular range monitoring that informs their grazing decisions, and because their ecological data is accurate and timely, they are able to make responsible management decisions in real time.”

The problem, according to Western Watersheds Project, has its origins in a 2014 congressionally authorized loophole amending the Federal Land Policy and Management Act to allow BLM to reauthorize the 10-year grazing permits without making any changes in the permit conditions, pending completion of NEPA analysis.

The idea, from lawmakers’ perspective, was to allow grazing activity to continue while granting BLM more time to whittle down the backlog of NEPA reviews.

But WWP said its review of BLM’s publicly available schedule information database shows that many of these NEPA reviews aren’t being scheduled and completed, making it difficult to know the exact condition of specific rangelands at a time when drought is gripping most of the West.

The WWP review follows a report earlier this month from Public Employees for Environmental Responsibility that found roughly half of the 108 million acres of land that has been leased by BLM for livestock grazing does not meet baseline rangeland health standards (E&E News PM, March 14).

WWP says its review of federal records shows the volume of grazing permits being renewed without NEPA review has steadily gotten worse.

The data reveal that in 2013, about 28 percent of grazing allotment permit renewals on federal lands were authorized without any NEPA analysis.

“The bureau has actually sharply reduced the number of new NEPA analysis for grazing allotments, and is still woefully behind on land health evaluations, as well,” Osher said.

He characterized the lack of action as negligence.

“There’s clear evidence that the lands under the bureau’s protection are unhealthy due to grazing, and the bureau’s land managers are just willfully disregarding the law,” he said. “They’re just simply not doing what’s necessary to be done. It’s really unacceptable, and it needs to be dealt with as soon as possible.”

The backlog in NEPA reviews has broad implications for federal lands, the group says.

Among other things, Osher said the data shows that many of the grazing permits that have not undergone NEPA analysis are in areas containing designated priority habitat for the greater sage grouse, or in areas designated as sagebrush focal areas — habitat that BLM and the Fish and Wildlife Service have deemed critical to the bird’s survival.

In addition, BLM resource management plans, which outline landscape health condition goals and parameters for grazing within the boundaries of each land use plan, specifically don’t take effect until after site-specific NEPA reviews are done.

If those reviews aren’t done, the grazing goals and conditions in the resource management plans “aren’t worth the paper they’re written on,” Greta Anderson, WWP’s deputy director, said during today’s Zoom call.

This lack of commitment by BLM to conduct the site-specific NEPA reviews raises questions about the Biden administration’s commitment to sweeping conservation measures like the “America the Beautiful” initiative to conserve 30 percent of public lands and waters by 2030, Osher said.

Osher said BLM must make the site-specific NEPA reviews a top priority for federal rangeland managers, and it needs to beef up rangeland staff at the bureau to address the backlog.

“I think we all have hope that the Biden administration is receptive to this information and intends to take it into account in their future planning,” Anderson said. “We just really want to raise the awareness for everybody that this is a huge, ongoing problem on Western public lands.”