Many lawmakers doubt warming but are bullish on resilience 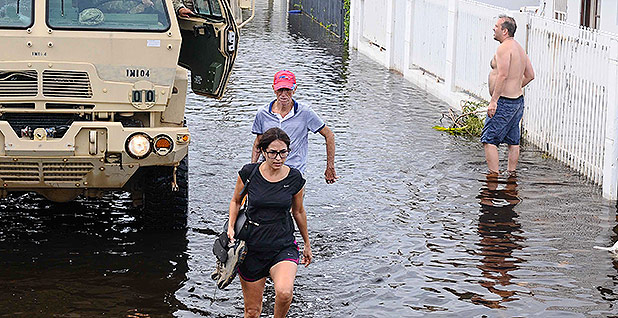 There is a mounting belief among lawmakers from both sides of the aisle that federal mitigation for and response to extreme weather events requires updating.

And while many Republicans are reluctant to discuss the role of climate change in fueling recent natural disasters, there’s nonetheless growing consensus that long-term recovery plans should address "future risks."

The Senate Homeland Security and Governmental Affairs Committee this week held a hearing to discuss emergency response to the recent spate of hurricanes, during which Republican Chairman Ron Johnson of Wisconsin called the situation "unprecedented."

"Starting back in late August with Harvey, then Irma and Maria within, literally, a span of 30 days, we just have not seen anything like this," he said at the hearing.

"I think it’s appropriate for this committee, long term, to really take a look at what is the proper balance between state and local response and the federal response in these situations."

House Minority Whip Steny Hoyer (D-Md.), who was also on that trip, said this week that the contrast between pre- and post-Andrew construction in the Florida Keys was striking.

He said there was general agreement among the members of the congressional delegation — which included House Natural Resources Chairman Rob Bishop (R-Utah) — that the requirements of the Stafford Act to rebuild to "what was" are "foolish."

"I think there was a bipartisan conclusion by the delegation that … we need to do more, we need to do it more quickly and that we needed to restore to a place where the vulnerability that existed, which is the reason for the extensive damage, ought not to be replicated but ought to be made, in effect, hardened," Hoyer said.

"There’s no doubt that part of the process of rebuilding will be assessing flood prevention," Cruz told E&E News in September. He noted that existing flood plain maps were out of sync with the intensity of the storm, which dumped 50 inches of rain in parts of east Texas.

"And so of course that will be part of the discussion of rebuilding, how to rebuild to minimize the risk of subsequent flooding and disasters."

House lawmakers today plan to mark up legislation to address rising risks to many economic and environmental systems, including agriculture, infrastructure, ecosystems and human health, posed by extreme weather incidents.

It would also facilitate local and state planning to address specific regional issues and establish a regional coordination system to ensure information sharing.

The measure has received endorsements from dozens of organizations, from libertarian think tanks like the Niskanen Center to groups on the left like the Sierra Club.

Still, some lawmakers believe a recognition of the threats posed by climate change is essential when drafting mitigation, preparedness and response solutions to extreme weather events.

"We must ensure that our recovery efforts include improvements in infrastructure that prepare us for a new climate reality. As Congress moves forward with additional disaster relief, it should require relief funds for the construction of resilient infrastructure and also prioritize mitigation efforts that save us money."

Heinrich yesterday released a report on the need to rebuild infrastructure from natural disasters in a way that limits future risk.

The senator said understanding global warming is an essential ingredient to rebuilding infrastructure to guard against natural disasters.

"Rebuilding after hurricanes, wildfires, and other natural disasters demands an immediate and comprehensive response from the federal government," the report states.

"This process also offers an opportunity to think long term about how our nation can better prepare to mitigate natural disasters and address risks that will only escalate with climate change."

Natural disasters are increasing in frequency, intensity and cost. According to the study, the annual inflations-adjusted disaster relief appropriated by Congress has increased 46 percent from a median of $6.2 billion for 2000 to 2006 to a median $9.1 billion for 2007 to 2013.

A recent GAO report examining the economic cost of global warming found the federal government has spent more than $350 billion in the last decade on disaster assistance programs and losses from flood and crop insurance.

The calculation does not include estimates from this year’s wildfires or spate of hurricanes, predicted to be some of the costliest in American history. Scholars have disagreed on the extent that recent episodes are related to global warming.

House Science, Space and Technology Chairman Lamar Smith (R-Texas) is asking the GAO for more information on its conclusions and methods.

Heinrich’s report maintains that investment now pays off later. Every dollar spent by the Federal Emergency Management Agency on disaster preparedness provides almost $4 in the future.