Many recusals for acting chief of DOJ environment section 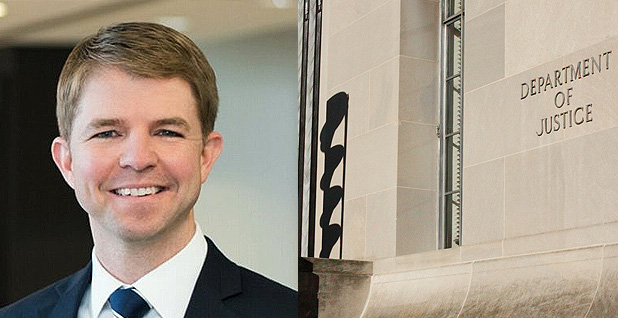 Jeffrey Wood, the acting head of the Justice Department’s environmental branch, is having to step aside from dozens of cases facing the government, both because of his past work for an Alabama law firm and Trump administration ethics restrictions, newly released documents show.

In all, Wardzinski, the chief of the division’s law and policy section, listed more than 40 cases — some of them related — from which Wood was precluded from participating at that point. Those included any in which his former employer, Birmingham, Ala.-based Balch & Bingham LLP, was involved, as well as those pertaining to Southern Co., the utility holding company headquartered in Atlanta that is a long-standing Balch client, and Nashville, Tenn.-based Ingram Barge Co., where Wood once worked as an in-house attorney.

Additional recusal areas required by the administration’s "ethics pledge" cover litigation related to Energy Department and Nuclear Regulatory Commission programs "to support the development and licensing of advanced nuclear reactors"; the so-called water wars between Georgia, Alabama and Florida; and issues involving the electric utility industry’s compliance with the Migratory Bird Treaty Act, according to the memo.

The Justice Department released the memo late last week in response to a Freedom of Information Act request from E&E News. Because DOJ doesn’t routinely make such records public, it’s unclear whether there is any precedent for that volume of recusals.

John Cruden, a now-retired career DOJ employee who headed the ENRD on a Senate-confirmed basis during the Obama administration’s final two years, said in an email to E&E News that he had only one recusal during his tenure.

The total was higher for Ignacia Moreno, who led ENRD from 2009 to 2013 and had to pledge to step aside from matters pertaining to General Electric Co., the sprawling conglomerate where she had previously served as counsel for corporate environmental programs. In an interview this morning, Moreno did not have an exact figure for the recusals during her tenure but said she believed that it did not involve "a large number of matters."

With more than 500 employees, DOJ’s ENRD counts EPA, the Interior Department and the Army Corps of Engineers among its client agencies. Its workload ranges from the defense of national rulemakings to local property spats involving the Rails-to-Trails program.

Currently, the division is managing more than 700 active cases in litigation, "and thousands of other cases, matters, and appeals," DOJ spokesman Wyn Hornbuckle said in an emailed statement. Wood’s recusal obligations "cover only a very small number of these matters," with senior career staff and other political appointees "able to ensure that the work of the department carries forward," Hornbuckle added.

Not all major cases are off-limits. Wood recently signed off on a successful motion to freeze proceedings in litigation over EPA’s 2015 ground-level ozone standard. He is also able to work on cases related to the agency’s contested Clean Water Act jurisdiction rules, Hornbuckle confirmed.

Wood, who also worked for Attorney General Jeff Sessions when Sessions was a Republican senator from Alabama, became acting assistant attorney general for the ENRD in January; on cases from which he is recused, counsel Brandon Middleton is stepping in "until further notice," Wardzinski wrote. Middleton is another alumnus from Sessions’ Senate staff, according to LegiStorm, an online website that tracks congressional employees.

In a recent interview with E&E News, Wood said that he had gotten a "pretty long" ethics opinion from DOJ attorneys upon joining the department. Those lawyers "laid out the matters for which they think I should be recused, and I’ve abided by that," he said (Greenwire, April 12).

Immediately before going to work for the government, he lobbied for Southern Co. and its subsidiary, Alabama Power Co., as a Balch & Bingham employee on a wide-ranging portfolio that encompassed climate change, the Endangered Species Act and Southeastern interstate water issues, according to disclosure reports filed with the Senate over the last year.

The scope of Wood’s recusals testifies both to the long reach of Southern Co., which operates as a power producer in Georgia, Alabama, Mississippi and Florida, as well as that of Balch & Bingham, which has more than 230 lawyers and lobbyists. The firm’s website touts its "deep experience" on behalf of clients in regulated industries. Among other customers, for example, is Luminant Generation Co. LLC, a subsidiary of Texas-based Vistra Energy that is fighting EPA’s attempts to require new pollution controls on several older coal-fired power plants under the regional haze program.

As the Trump administration seeks to roll back or review numerous measures put in place under President Obama, the potential impact of Wood’s recusals on the division’s operations is difficult to gauge.

While a fair number of recusals is not unusual for an ENRD chief, it can pose complications, "particularly in circumstances like this where a new administration has a different policy take on some of the matters that are captured by the recusals," said Scott Fulton, a former Justice Department and EPA attorney who is now president of the nonpartisan Environmental Law Institute.

For the administration, an added wrinkle is its slowness in filling in the ranks of political appointees at DOJ that would normally spearhead its agenda. Sessions is so far the only department’s Senate-confirmed employee, although lawmakers are likely to approve Rod Rosenstein, a U.S. attorney from Maryland, as deputy attorney general this week.

President Trump has not nominated anyone to permanently lead ENRD; he also appears to have been slow in filling lower-level slots in the division with appointees who could fill in for Wood on key cases.

Typically, as the division’s political team becomes a well-oiled machine, "these things work themselves out," said Justin Pidot, a former ENRD attorney who is now an associate professor at the University of Denver’s Sturm College of Law, said in an interview. "What’s unusual and potentially challenging right now is that there really isn’t a leadership team in place."

That may be changing, Pidot later acknowledged. Last week, for example, the department hired Texas lawyer Eric Grant as a deputy assistant attorney general to supervise appeals at ENRD, according to a news release from his former firm.

"I am looking forward to advancing the new administration’s environmental policies in appellate courts around the country," Grant said in the release.