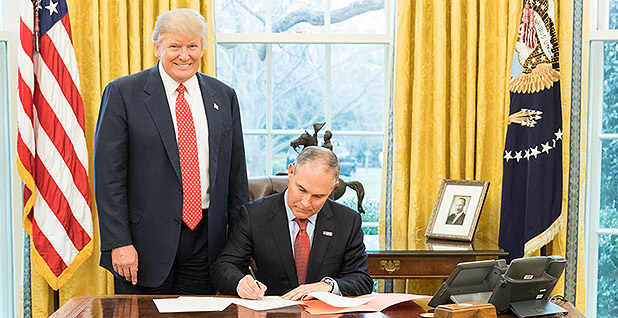 U.S. EPA employees aren’t rushing for the exits, despite jitters about the Trump administration’s direction on the environment and its efforts to give cash incentives to staffers who leave their jobs.

Some agency employees have left, citing opposition to President Trump’s policies. But most EPA staffers are staying put. The agency’s workforce grew during the first several months of the Trump administration, and current employees suspect there won’t be many takers for voluntary buyouts and early retirement offers.

"It’s rare" to see employees departing, said one EPA staffer. "Folks are dedicated to the mission and really see that even if your wishes or your policy stance don’t align with the administration, there’s still important work to be done."

Even those who oppose Trump’s plans to roll back rules and slash EPA’s budget are hunkering down for a variety of reasons, according to current staffers. Some are waiting out the administration, while others want to fight policies they disagree with from the inside. Some worry that they won’t be able to find jobs and can’t afford to abandon their salaries, even if they’re eligible for the buyout packages.

John O’Grady, an EPA union leader based in the agency’s Chicago office, said employees are still waiting to see how Trump’s policies impact them.

"Really the new administration hasn’t come and done dastardly things yet to EPA," he said. "They proposed a horrible budget and horrible staffing figures, but it’s being mitigated somewhat by Congress."

He added, "I think people have some hopes about the 2018 elections changing at least the makeup in Congress."

Gay MacGregor is one ex-EPA employee who left because of the Trump administration. The former senior policy adviser at the agency’s transportation office in Ann Arbor, Mich., had vowed last year to leave if Trump won the White House. She was close to retirement but had been planning to stay for one more year.

"I told my boss last summer when [Trump] won the primary I would leave if he won, because I thought I could do more good from the outside because people inside would be more restricted from talking, either by edict or because they felt it was too risky," MacGregor said.

Overall, EPA’s staff grew between December 2016 and March 2017, according to the most recent data from the Office of Personnel Management. EPA had 15,707 employees nationwide in December and 15,797 in March.

Now the administration is looking to cut about 1,200 staffers by September through buyouts. But employees and union officials don’t think there will be many takers.

There is the question of the incentive itself. Employees who accept the buyout can’t get more than $25,000. That value hasn’t changed recently to reflect inflation, so it isn’t as attractive as it might have been a number of years ago.

"The people that are ready to retire right now or within three months would be happy to accept a check from EPA as an enticement or a bonus," O’Grady said. But the $25,000 maximum payout isn’t enough for most employees, he said.

And the Trump environmental agenda will have a "cascading effect" in states and corporations, O’Grady said. So people working in the environmental field can’t expect to find regulatory jobs in other areas. "Where are you going to go to find another job?"

For those who may want to leave early, they’re facing an "incredibly short" window of time to make up their minds, said Nicole Cantello, vice president of labor relations for the nonprofessional unit at the American Federation of Government Employees (AFGE) Local 704.

Employees who are eligible were notified by their program or regional manager on July 13, according to an internal memo obtained by E&E News.

The timing of the announcement means that people had a matter of days to decide whether they will leave the agency, said Cantello.

"It’s a huge decision that they have to make. There are a lot of financial decisions and soul-searching," said Cantello. "The people attracted to federal employment like consistency. These are not risk-takers. To have to make this decision goes against the grain.

"I think people feel under the gun, these people love their jobs," Cantello added.

While she had heard of some staff being interested in early retirement, that’s not the case for buyouts among younger workers.

There could be layoffs if the administration doesn’t achieve its workforce reduction goals.

The White House’s draft budget released earlier this year proposed cutting EPA’s staff by 3,200 employees in fiscal 2018, although cuts that steep are unlikely to clear Congress.