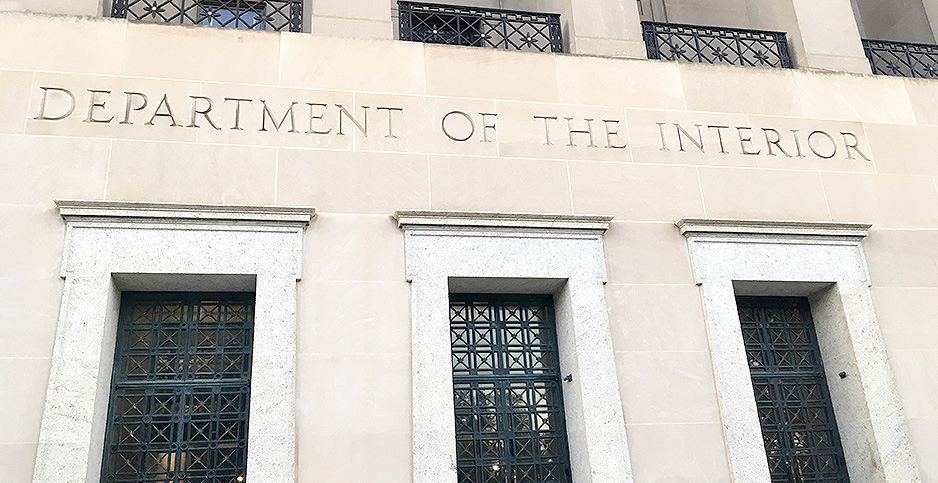 The Interior Department is planning to divide management of federal lands into regions. Pamela King/E&E News

Interior Secretary Ryan Zinke’s vision for reorganizing the Interior Department includes dividing management of millions of federal acres into 13 multistate regions along boundaries of watersheds and basins, according to maps obtained by E&E News.

One map, which sources said was developed by the U.S. Geological Survey, outlines the boundaries of 13 regions stretching across the continental United States and Alaska, as well as the Pacific islands, Puerto Rico and the U.S. Virgin Islands.

A second map provided to E&E News shows a similar layout, but with only 12 regions.

The maps provide the most detail to date on the still-mysterious Interior Department reorganization plan that has been in the works since the opening weeks of the Trump administration, but that Zinke has discussed publicly only in broad terms. Today he met about the proposal with roughly 150 Interior senior executives gathered in Washington.

Zinke, a former Navy SEAL, has in recent months disclosed general details of the plan to senior-level employees, including the concept of establishing a dozen or more joint management areas, or JMAs, an idea based on the military’s joint command structure (Greenwire, Aug. 15, 2017).

The maps obtained by E&E News do not mention JMAs. But they outline a plan to divide the management of onshore lands and offshore resources into at least a dozen regions, with names like the North Atlantic-Appalachian, Colorado Basin and Northern Pacific Mountains regions, each covering hundreds of thousands of square miles extending into the Gulf of Mexico, the Atlantic and Pacific oceans, and the coast of Alaska.

The regions, in many cases, split states like Colorado, Nevada and Wyoming into multiple sections.

The proposed North Central region includes all of North Dakota and Nebraska and most of South Dakota, but only sections of Kansas, Missouri, Iowa, Minnesota, Montana, Wyoming and the northeast corner of Colorado.

Interior would need to establish a central headquarters for each of the dozen or more regions.

The maps were shared today with Interior Senior Executive Service career employees at a meeting titled "Department of the Interior Leadership Summit: Planning for the Next 100 Years."

Zinke spoke this morning at Interior’s headquarters for more than an hour to agency employees gathered in the department’s first-floor auditorium. James Cason, Interior’s associate deputy secretary, also addressed employees, after which the participants began convening in a series of breakout sessions.

"The next two days, we’ll be getting feedback," Deputy Interior Secretary David Bernhardt said in a telephone interview today with E&E News. "We’re at the first stages of the dialogue."

Bernhardt said Zinke "laid out his vision" for the department reorganization, which includes dividing the country up into the 13 regions. So far, though, the discussions have not centered on key specifics, including potential locations for regional headquarters, employee transfers or costs.

In general, Zinke’s notion is to have certain common tasks such as contracting or National Environmental Policy Act compliance handled by a region’s shared staff.

"It’s … about getting more resources out to the field," Bernhardt said, adding that "the generals will be closer to the troops."

"I think there will be a quality-of-life improvement for employees," Bernhardt said.

More work to do

It’s not clear whether the map with 12 regions, which is dated Oct. 26, has been abandoned. An Interior source said that the boundaries are still under development and that no final decisions have been made.

Interior is expected to reveal final details of the reorganization plan in President Trump’s fiscal 2019 budget request, slated for next month.

But the maps provide insight into the development of the reorganization plan.

Zinke has stated publicly that he wants to reorganize the department to make it more efficient, and he has testified before Congress that he wants to reduce the department’s workforce by 4,000 full-time jobs. He has also floated the idea of moving some agency headquarters, such as that of the Bureau of Land Management, out of Washington to Denver or another location in the West, where the vast majority of federally managed lands are located.

Dividing Interior into 13 regions would certainly be a major shift in policy.

Interior’s Fish and Wildlife Service and Bureau of Reclamation, for example, are already split into regions. Indeed, most of Reclamation’s current regions — including the boundaries of the bureau’s Pacific Northwest and Mid-Pacific regions, and Upper and Lower Colorado regions — are similar to the regions in the reorganization map.

But the change could be significant for BLM — the federal government’s largest landowner, managing nearly 245 million acres — which divides management of federal lands in its jurisdiction, with few exceptions, along state lines.

The Eastern States region is broken up into four regions in the USGS proposed maps: the Mississippi Basin region, stretching the length of the Mississippi River from Minnesota and Wisconsin south to Louisiana; the Great Lakes-Ohio region; the North Atlantic Appalachian region; and the South Atlantic Gulf region.

The issue with BLM boundaries and how that affects management of federal lands is certain to prompt scrutiny from members of Congress and Western governors.

Yet the regional approach would divide states into numerous regions.

A prime example is Colorado, which according to the maps would be broken into three regions — the Colorado Basin, North Central and South Central regions.

Another example is New Mexico, which would mostly be part of the South Central region. But the Western end of the state would be split into the Colorado Basin region.

Arizona would stay intact, wholly inside the Colorado Basin region. But that region would include portions of Nevada and Utah to the north, and New Mexico to the East.

Altering BLM jurisdiction in individual states has been controversial in the past.

A move by the Obama administration’s BLM nearly three years ago to merge the agency’s New Mexico and Arizona state offices had to be abandoned after a firestorm of complaints from bipartisan lawmakers, including Rep. Raúl Grijalva of Arizona, the House Natural Resources Committee’s top Democrat.

Lawmakers, particularly those from Arizona and New Mexico, feared that consolidating the offices — each with several hundred employees — would distance BLM from its constituents. Congressional delegations, like governors, prefer having their own BLM state office overseeing resource issues, rather than having to call across state lines to a regional director.

The Denver-based Western Energy Alliance also opposed that merger, arguing at the time that it would result in less efficient land management, since the two offices specialize in different resource issues — New Mexico has lots of oil and gas, while Arizona has more mining and national parks.

The House Appropriations Committee in June 2015 advanced a spending bill for the Interior Department with report language blocking the merger.

Even though very few details about Zinke’s latest reorganization proposal have been shared with the general public, the Western Energy Alliance has already raised concerns about aspects of the reorganization involving BLM.

Kathleen Sgamma, the alliance’s president, stated in written testimony to a House panel last month that it is "skeptical of efforts to change BLM from a mostly state-based organization to one based on ecosystems or watersheds," and that "the best structure for the BLM is the current one, based largely on states" (Greenwire, Dec. 7, 2017).