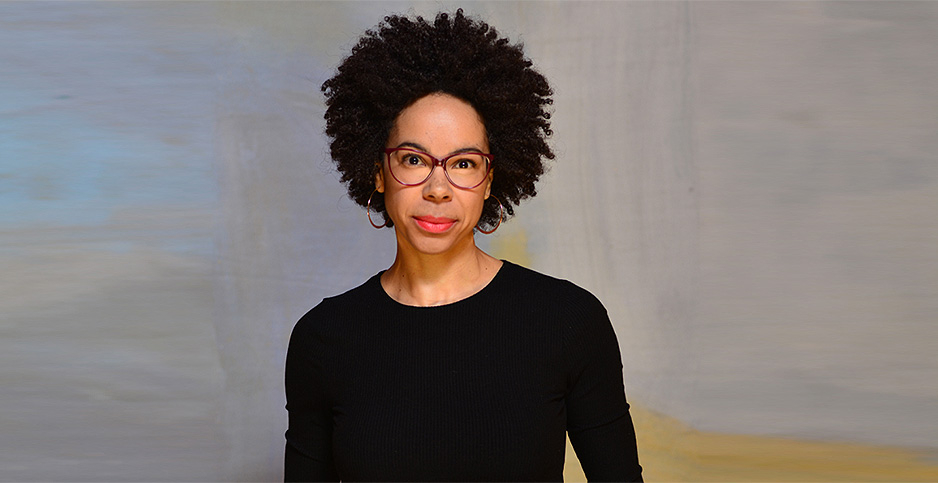 The essay — titled "I’m a Black climate expert. Racism derails our efforts to save the planet" — came as protesters around the country took to the streets to condemn racism and police brutality.

For Johnson, the piece finally articulated what she — and other Black experts who work on climate change — had been feeling for a while.

"The most wonderful notes I got were from Black people who work in climate who said, ‘I haven’t been able to put this quite into words,’" Johnson recalled in a recent interview. "And that meant a lot to me because it took me a long time to put it into words myself."

A native of Brooklyn, Johnson graduated from Harvard University before obtaining a Ph.D. in marine biology from the Scripps Institution of Oceanography.

She went on to found the consultancy Ocean Collectiv and the think tank Urban Ocean Lab. Later, she advised the presidential campaign of Sen. Elizabeth Warren (D-Mass.) on the Blue New Deal, a proposal similar to the Green New Deal that frames oceans as a solution to climate change (Climatewire, Dec. 11, 2019).

The 39-year-old recently spoke on the phone with E&E News about racial injustice and climate policy from a farm in upstate New York, where she’s spending time with her mother during the coronavirus pandemic.

Why did you decide to write the op-ed in the Post?

I decided to write the piece because I was angry and sad, and writing helps me get my thoughts together. It started out as more of a personal chronology of my experiences over the first few weeks of this renaissance and uprising for racial justice.

But then I thought really hard about what I could offer at this moment. And I realized that one thing I could do was help environmentalists — white environmentalists in particular — connect the dots between race and climate in a way that maybe they haven’t before.

I think there hasn’t been enough conversation around what it means to be a Black person who’s committed to working on climate, and the fact that we really need everybody to be involved if we’re going to address this existential crisis that is climate change.

I wanted to connect the dots and explain that there are 23 million Black Americans who already care about the climate crisis, but who are dealing with all of these other issues that prevent us from committing our full selves to solving this problem.

What was the reaction to the piece?

Well, it was definitely read and shared much more widely than I had anticipated. And I think that’s because people in the climate movement haven’t all necessarily engaged — or known how to engage — on issues of racial injustice. And this gave people another avenue for understanding and sharing that.

The most wonderful notes I got were from Black people who work in climate who said, "I haven’t been able to put this quite into words." And that meant a lot to me because it took me a long time to put it into words myself.

Did you get any negative feedback?

I also heard from some white environmentalists who have always thought climate justice is a ridiculous approach because climate change is a global problem that affects everyone. It’s sort of the "all lives matter" approach to climate change, which ignores the fact that people of color are more severely impacted. And the notes I got from those people were like, "Thank you for putting it this way. Racism hinders your productivity and prevents us from getting more people involved in climate work. I get it now."

I was just like, "You totally missed the point. But if that’s what gets you to care about Black lives, I guess I’ll take it."

And then in the comments section, there were some conservative people who tried to attack my credentials, saying I’m not a climate expert and linking to my Ph.D. in marine biology. They had nothing to say about the content of the piece — they just wanted to tear down my qualifications. And that says a lot about where we are in the national discourse.

What do you hope readers take away from the piece?

Well, the thing that really gets my goat is the misperception that white people care more about the environment and about climate. That perception is just not supported by the data.

Time after time, polling has shown that people of color are actually more deeply concerned about climate and the environment than their white counterparts. But there’s been a missed opportunity of not deliberately engaging them and relieving the pressures of white supremacy on them. So I wanted to get that message through and say, "We’re here and we care, and if you would just stop killing us, then we could be more helpful on climate."

How did you come up with the idea of a Blue New Deal?

I was working with a few colleagues, and we realized that the Green New Deal resolution only mentioned the ocean once in passing. We thought it was missing the opportunity to include a bunch of solutions that are needed. We ended up writing a policy memo for the think tank Data for Progress, and then the Warren campaign became interested, and I advised them on what became their Blue New Deal plan.

It was a wonderful experience. I got to collaborate with Warren’s climate adviser, Maggie Thomas, who had come from [Washington Gov. Jay Inslee’s (D) former presidential campaign], and she was wonderful.

You know, no other campaign released an ocean plan. So it wasn’t like other Democratic candidates were criticizing it. The [Sen.] Bernie [Sanders (I-Vt.)] people and the [former Vice President Joe] Biden people were just like, "This seems nice."

In addition to the op-ed in the Post, why did you decide to write a piece in Scientific American about the role of oceans in climate policy?

It’s really important to me to reframe the ocean as part of our climate solution. We look at the ocean as a victim of warming, acidification, overfishing, pollution and habitat destruction. But we don’t think of all the ways in which it can — and is — protecting us. The ocean has absorbed 90% of the heat we’ve trapped with greenhouse gases and absorbed a third of the [carbon dioxide] we’ve emitted by burning fossil fuels.

So the piece lays out four key ways the ocean can be part of our climate solution. The first is offshore wind energy, which is a massive job creator. The second is protecting and restoring coastal ecosystems. I think we often want to make climate solutions some sort of high-tech thing, like it’s all about solar panels and electric cars, but if we’re going to absorb CO2, photosynthesis is a super good way to do that, and half of photosynthesis actually takes place in the ocean. Then the third is using algae as a potential biofuel, and the fourth is regenerative ocean farming.

How did you first become interested in marine biology?

I grew up in a working-class household in Brooklyn, and we only really went on one family vacation my entire childhood, and that was to Key West, Fla. I was 5 years old at the time. I learned to swim, and I went on a glass-bottom boat and saw a coral reef for the first time and all the colorful fish. I also went to the aquarium and got to hold a sea urchin and just feel its feet crawling across my palm.

I was totally hooked. I was like, "What is this amazing other world that’s happening below the surface of the water, and how can this just be my life?" And my mom explained to me that there’s this job called marine biologist, and I was like, "That’s going to be my job."

Did you ever entertain other career paths?

Oh, sure. When I was 10 years old, I wanted to be the lawyer that got the next Martin Luther King Jr. out of jail. [Laughs]

I also thought about becoming a park ranger or an environmental lawyer. But when I was doing my Ph.D. in marine biology and working with communities in the Caribbean, I realized that ocean conservation is related to science and justice and the law. It combines everything I care about.