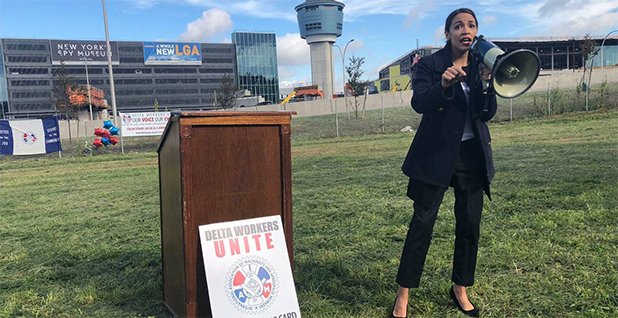 As expected, the nonbinding document calls for "a new national, social, industrial, and economic mobilization on a scale not seen since World War II and the New Deal era."

That would involve a 10-year national mobilization, involving heavy investments in infrastructure and the energy industry, with the goal of moving to net-zero greenhouse gas emissions and providing a just transition for communities and workers.

The resolution has been in the works for weeks, but like much surrounding the Green New Deal, it’s more concept than policy suggestion.

Still, it does provide some tangible baseline for progressives pushing presidential candidates and Democrats across the board to endorse the idea.

It also includes some notable passages — and omissions.

The resolution would not, for example, call for a ban on new fossil fuel development, long a goal of left-leaning environmental groups.

The resolution calls for other lofty goals, such as providing health care and affordable housing for all and a commercial environment where businesses are "free from unfair competition and domination by domestic or international monopolies."

The idea would be to make the United States a global leader in renewables development and climate policy, but while it calls for plenty of new funding, there are few pay-for suggestions.

On that front, the resolution does not suggest a price on carbon, though supporters of the "Green New Deal" have said it could be part of the eventual solution.

There are plenty of other hurdles to the "Green New Deal" ever becoming a reality, not the least of which is strong Republican opposition on both sides of Capitol Hill. The GOP has already started messaging against the platform hard at climate hearings and press conferences (see related story).

Establishment Democrats, meanwhile, are working on their own ideas to address climate change, which will likely culminate in a carbon pricing proposal.

It’s also not clear if the resolution would even make it to the House floor or get support from Speaker Nancy Pelosi (D-Calif.), but Rep. Ro Khanna (D-Calif.), a co-sponsor, predicted leadership would support it.

"I think they’ll be supportive. It’s an aspiration piece of legislation, and you can’t get closer to the speaker than Ed Markey," Khanna told reporters yesterday. "So the fact that he’s leading it gives it a lot of credibility."