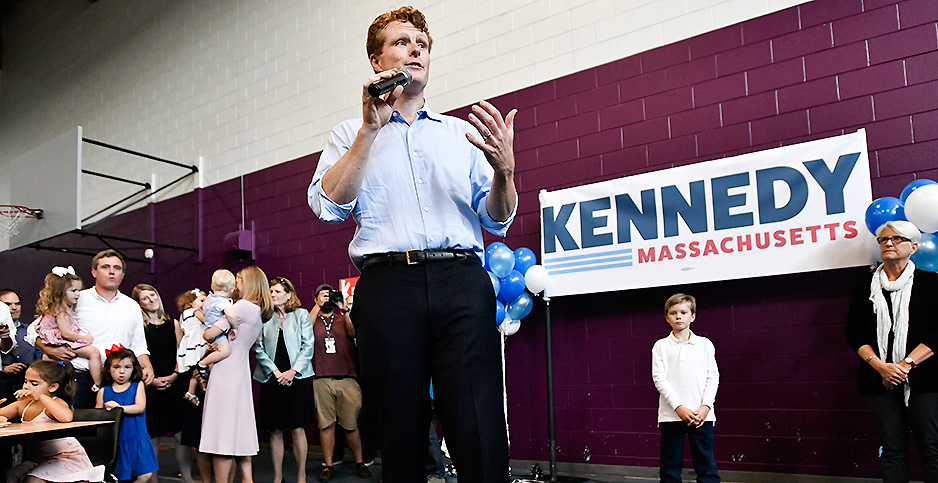 The incumbent’s ties to the environmental community and his climate advocacy mean green issues will be central in the contest. Markey is already challenging his opponent to a debate on climate.

Kennedy, 38, didn’t directly mention Markey, 73, in his campaign announcement; instead, he called out President Trump and the Senate.

"We have a Senate that, instead of trying to harness the opportunity potential of every person in this country, they’re trying to pull us back. And I’m running for the United States Senate to tear that down, to fight back," Kennedy said at his launch event at a Boston community center.

He spoke at length about his family of high-profile politicians, including his great-uncle President Kennedy and grandfather Attorney General Robert F. Kennedy.

"Donald Trump has forced a reckoning for our nation, without question. But to meet this moment requires more than just beating him. It requires taking on — clearly — a broken system, the calcified structure that allowed him to win in the first place," Kennedy continued.

He made a brief mention of climate change, saying that Americans deserve a country "where we have a healthy planet for our children and their children."

The race is likely to be one of the most high profile of any in the 2020 cycle, in part due to Kennedy’s family. The Senate primary is scheduled for Sept. 15, 2020, less than two months before Election Day.

Kennedy, who has represented Massachusetts’ 4th District since 2013, comes into the race as the front-runner over Markey, who came to Congress in 1976, four years before Kennedy was born.

A Suffolk University/Boston Globe poll this month found that Kennedy would beat Markey by 9 percentage points in a multicandidate primary, or 14 points head to head.

Markey has been building up support among progressives, particularly in climate change circles. In recent weeks, he’s been endorsed for reelection by Rep. Alexandria Ocasio-Cortez (D-N.Y.), Sen. Elizabeth Warren (D-Mass.), the Sunrise Movement, the League of Conservation Voters and the Sierra Club (E&E Daily, Sept. 13).

Markey responded to Kennedy’s entrance into the race, in part, by challenging him to a debate on climate change.

"I was very disappointed at the Democratic National Committee’s refusal to hold a debate on climate change for our presidential candidates. In Massachusetts, we should do better than that. So today, I’m challenging Congressman Joe Kennedy, Shannon Liss-Riordan, Steve Pemberton to a climate change debate, and to do it very soon," Markey said in a video posted Saturday, suggesting the week of Nov. 11 for the event and asking environmental groups to sponsor it.

In a separate statement from Markey’s campaign on Kennedy, it said the senator plans to continue his "leadership on the issues that matter most — climate change, income inequality, gun reform, universal health care, reproductive freedom, and immigrant rights."

"Elections are about choices, and Ed looks forward to spending the next 14 months campaigning hard every day to show the people of the Commonwealth why he’s the right choices," the campaign said, without mentioning Kennedy.