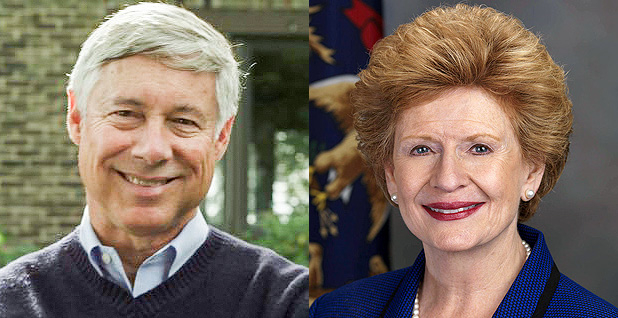 Former House Energy and Commerce Chairman Fred Upton (R-Mich.) isn’t ruling out a challenge to Sen. Debbie Stabenow (D-Mich.) in 2018, a race that could quickly become one of the most competitive and expensive Senate contests of the cycle.

Upton, who was term-limited from serving as Energy and Commerce chairman this Congress after leading the panel the past six years, told E&E News recently he’s had "nothing to do with the chatter" in recent weeks about a possible run. He said he’s focused on his House work, which includes leading the panel’s Energy Subcommittee.

But when asked to rule out a run against Stabenow, Upton would not.

"I have not made a Sherman-esque statement," he said.

The matchup would feature two of the most powerful lawmakers in Michigan politics, who would have little trouble raising the tens of millions of dollars likely to be spent on the race. It would also feature two seasoned legislators with contrasting records on energy and environmental issues.

Stabenow, who already has $3.2 million in her campaign account to run for a fourth term, said this week she feels "good" about her re-election prospects and would continue to focus on agriculture and manufacturing issues important to Michigan.

She said "we’ll see" when asked about an Upton challenge, noting she did not have any indications that he would make the bid.

Susan Demas, the editor and publisher of the nonpartisan political news site Inside Michigan Politics, said Upton seemed to be taking a "serious look" at the race and making contacts with local leaders to test his prospects as recently as last month.

"If he was going to take the leap, ’18 would seem the logical year to do it," said Demas, noting that President Trump was the first Republican White House contender to carry Michigan since 1988.

Demas said Upton’s refusal to endorse Trump for president cuts both ways for him. If there is a Senate GOP primary, Upton could be vulnerable to a conservative opponent, but if Trump’s popularity dips, his lack of an endorsement could appeal to swing voters in a general election.

Upton would have no problem raising money given his time atop Energy and Commerce, long one of the House’s prime fundraising posts. He is also one of the wealthiest members of Congress.

The 16-term lawmaker has just under $500,000 in his House campaign account but raised nearly $3 million for the last election cycle when he did not face a strong Democratic opponent. Among his top five contributors are the oil and gas industry and electric utilities, according to the Center for Responsive Politics’ fundraising database.

Still, Demas puts the prospects of Upton running at less than 50 percent, noting he would have to give up a likely safe House seat to take on a three-term incumbent who has decisively won her past two re-election bids.

Environmental groups would be certain to back Stabenow over Upton.

Mike Berkowitz, political director for the Michigan Sierra Club, said Stabenow has been a "fantastic environmentalist," noting she backed the Obama administration’s Clean Power Plan and protections for the Great Lakes. He said Stabenow is a "stark contrast" to Upton, who pushed environmental rollbacks favored by the pro-fossil-fuel Koch brothers at Energy and Commerce.

The League of Conservation Voters gives Stabenow an 88 percent lifetime rating compared with a 50 percent average score for senators; Upton has a 26 percent lifetime score versus a 43 percent House average.

Still, Berkowitz said there has been plenty of talk in Michigan about a potential Upton run, and he would likely be the most "viable" GOP candidate.

Michigan political operatives point to her skills on the campaign trail as crucial to her success in holding office nearly interrupted at the county, state or federal level since the mid-1970s. She is one of only six current senators — and the only woman — to have been a House member and senator at both the state and federal level.

"She is one of the best retail campaigners I have known, she is all over the state," said Sen. Gary Peters (D-Mich.), who added that Stabenow’s status as the top Democrat on the Agriculture Committee is crucial in a state where farming ranks only second to auto manufacturing as its top industry.

Stabenow’s fortunes could be boosted by the next farm bill, which Congress is due to take up next year.

Additionally, she sits on the Senate Finance Committee, which is weighing a business tax overhaul that could appeal to the state’s auto giants. She has previously helped push through targeted energy tax credits popular with her state’s manufacturers.

Sen. Chris Van Hollen (D-Md.), who is leading the Democratic Senatorial Campaign Committee this cycle, said Stabenow is in "very good shape," noting she has won "numerous" elections and is "all about Michigan."

Republicans, however, see Stabenow as vulnerable given her mostly liberal record and believe that in an era of backlash toward incumbents, her long tenure in statewide office could be a liability. They are eager to link her to other Democratic leaders as chairwoman of her party’s Policy and Communications Committee in the Senate.

"I think Michigan is going to be a great opportunity this election cycle," said Sen. Cory Gardner (R-Colo.), the chairman of the NRSC.

Gardner said he has not talked with Upton about the race but called him an "incredibly powerful voice for Michigan."

Upton, 63, an heir to the Whirlpool Corp. appliance manufacturing fortune, has been in the House since 1986 after serving in the Reagan administration’s budget office. Early on he had a reputation as a moderate, but he tacked to the right as Energy and Commerce chairman.

If he runs for Senate, he could count on the backing of many conservative groups for pushing to repeal the Obama health care plan and the energy industry for helping to get a ban on U.S. oil exports lifted in 2015.

While some political strategists say Upton would be handicapped because he hails from the southwestern part of the state — far from the Detroit media market that takes in over half the state’s registered voters — others say being Energy and Commerce chairman raised his profile.

He’d also benefit from being the uncle of supermodel Kate Upton, who is married to Detroit Tigers pitching star Justin Verlander, operatives say.

Other Republican candidates mentioned for the race are state and county officials not widely known — although there are rumblings that musicians Kid Rock or Ted Nugent, both high-profile conservatives from Michigan, could get into the race.

"Once upon a time all of us would laugh" at Rock or Nugent in the Senate, said Demas. "But we now have a reality TV star who is our president."