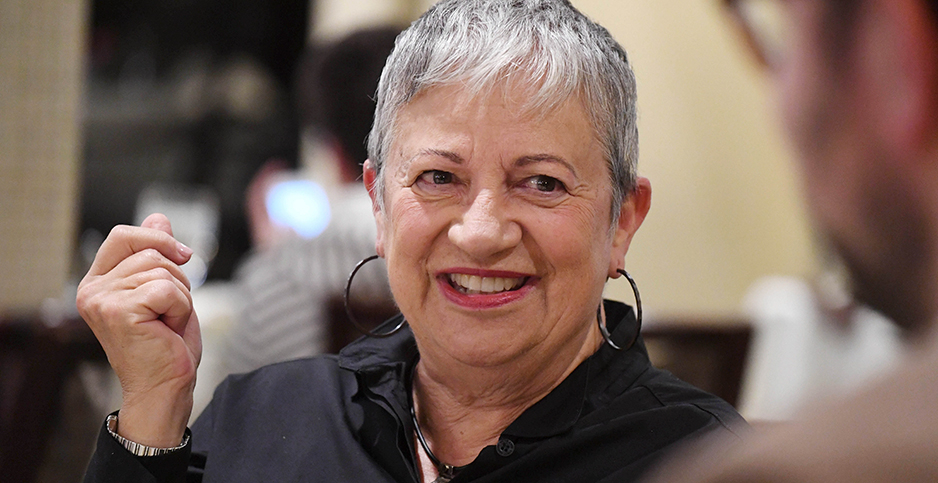 Mary Nichols, head of the California Air Resources Board, is a candidate to lead EPA in the Biden administration. Uli Deck/dpa/picture-alliance/Newscom

Mary Nichols plans to make fighting climate change a top priority of EPA if given the chance to run the agency.

Nichols, 75, is seen as a front-runner for the administrator’s post under President-elect Joe Biden. Either way, she’s poised to leave her current job overseeing the California Air Resources Board later this month, after running the climate-focused office for 13 years.

In an interview with E&E News yesterday, Nichols spoke confidently about her strategies for helping Biden set the nation on a path toward net-zero emissions by 2050.

Other contenders for EPA chief include Heather McTeer Toney, EPA regional administrator for the Southeast under Obama, and Collin O’Mara, president and CEO of the National Wildlife Federation.

Nichols has worked under three governors while leading CARB: Republican Arnold Schwarzenegger and Democrats Jerry Brown and Gavin Newsom. Before that, she was secretary of the state Natural Resources Agency under former Gov. Gray Davis (D). She also worked as assistant administrator of the Office of Air and Radiation at EPA.

Here is what Nichols said about how she’d lead EPA.

What is your vision for climate policy at the federal level?

EPA is only one player in developing the national climate policy. The president[-elect] will ultimately set that policy. He’s made it amply clear already that he intends climate policy to be a part of economic policy, and vice versa, as well as national security policy.

Every corner of the federal government is going to be involved in the overall transition to a zero net-carbon world, and for the United States to play a leadership role in getting us there. Not to downplay what I hope my contribution would be, but I want to make it clear that I view EPA’s role, particularly its existing regulatory authority under the Clean Air Act, and also the other activities that would be involved in terms of land reclamation, and water quality and so forth, all of those things are part of EPA’s mandate.

The first thing that has to be done is to bring back or reconstitute the scientific capacity at EPA. That means to bring back the term "climate change" and "global warming" when it comes to the research agenda, and to the discussions for the public and that are on the website.

Collaboration with NOAA and NASA and the national labs and others, it’s all part of strengthening the ability of EPA to carry out its responsibilities appropriately.

The second thing would be to stop the war against the states, not just California but … over 20 states have adopted climate goals and are working diligently within their own jurisdictions to cut emissions.

Scientists have said the world has 10 to 12 years to make big changes in reducing emissions. Is that possible?

We are in a crisis situation at the moment. I’m not proposing to take a decade to begin work. I just think that it’s important to use the science that’s available now and to invest going forward in building our technical and scientific capacity.

As far as what needs to be done right away, we’ll start with reaching an agreement on what the auto emissions of greenhouse gases are going to be in the next four or five years, and developing a plan for future model years going forward that gives an emphasis to zero-emissions vehicles. That can be started right away.

Beyond vehicle standards, can you lay out the top areas you’d address at EPA?

There are things that we have put forward in our California program, including our low-carbon fuel standard, which has been extremely successful, or the 100% zero-carbon legislation. Both of which could be done at the federal level and be even more effective and more cost-effective. But I’m not prepared to say that these are things we could just do. You have to build consensus around these ideas. That would be part of my job if I were there.

How would you deal with Republican opposition?

We will find ways to reach agreement with Republicans about climate progress. You can already see that there are Republican members of Congress coming forward with proposals for things that they are in favor of that would in fact be helpful, even though they are not as strong as what the Democrats are proposing. Finding ways to get everybody behind an ambitious-enough program is critical.

It’s going to have to involve a whole realm of different policies, whether it’s tax policy or agricultural policy or foreign policy. All of these things play into the development of a robust climate policy.

In California, you’ve had support from Democrats and a Republican governor. Will GOP opposition in D.C. lead to more moderate policies?

When I was appointed and confirmed as assistant administrator for air and radiation in Bill Clinton’s administration, I did not have strong Republican support. Two years after we were into that administration, [former Speaker of the House] Newt Gingrich [R-Ga.] and his "Contract with America" came into power in the Congress. We faced very strong opposition to taking action under the Clean Air Act.

I have quite a lot of real world experience working with political opposition parties and working to deliver real programs at the state and local level. That’s how it’s going to work going forward because we don’t have national consensus legislation yet around major climate action. But we have states that already are leading on this and are eager to do so.

As policies come into effect that aren’t directly called climate change policies, that are called infrastructure policy, or promoting electric transportation, or rebuilding roads with charging stations alongside, these kinds of programs will attract other states that are not now in the climate coalition. That is how we are going to achieve the reductions that we need.

If Democrats win control of the Senate, what progressive policies would you expect to achieve?

That’s all out there in [Biden’s] proposed platform. He’s taken on every issue that California has worked on. His whole platform really is the California platform. So just as when I went to EPA the last time, I would find myself working at the national level to carry forward or adapt the ideas that have already been adopted in California.

What California policies could work as a federal policy?

Our vehicle rules and policies, including all the incentives that we’ve created around fueling and charging for zero-emission vehicles, are the most important contribution California gets to make at this point. The linking between public health and equity and climate policy is critical. We won’t succeed domestically, and we can’t succeed globally unless we recognize that you have to find strategies that improve public health, and help to raise up the poorest and most impacted parts of our country as part of the move toward an effective climate strategy.

How do you respond to criticisms from environmental justice groups who say you supported policies that polluted their neighborhoods (Greenwire, Dec. 3)?

California’s record of implementing legislation, including A.B. 617, but also earlier legislation that directed 40% of all the proceeds of the cap-and-trade program to the most impacted communities, and the strategies that we’ve used to get that money out, have been extremely successful.

They haven’t done everything that we would have hoped, but they are literally a decade or more ahead of what any other place has done. I don’t expect advocates to be content, but I would hope that they would recognize that the progress that we have made here is really stellar and is being looked to by others as a model.

What motivated the letter from 70 EJ groups saying they don’t support you?

I’m a pretty visible target and a symbol perhaps of how they would like to see things better.

Have you been interviewed by Biden?

I am not discussing where I am in the process.

Would you accept the job if asked?