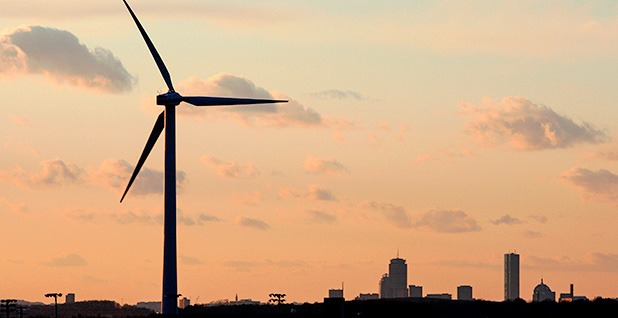 A wind turbine stands in the foreground of Boston. Massachusetts is emerging as a clean energy powerhouse, rivaling even California, experts say. Photo courtesy of AP Images.

Make room, California. Massachusetts is making a run for the top echelon of U.S. clean-energy states.

In an unprecedented string of policy developments this summer, Massachusetts has embraced core elements of what experts describe as a transformational blueprint for how carbon-free electricity flows from power producers and utilities to consumers. At the same time, the state has backed technology that could sock away vast amounts of electricity to hedge against high prices and weather-related emergencies.

The blueprint, nearly two years in the making, emerged with the passage last month of legislation mandating the procurement of nearly 3 gigawatts of new carbon-free electricity, including 1,600 megawatts of offshore wind power and 1,200 MW of so-called Class 1 resources such as onshore wind, solar and hydropower.

The 2016 Energy Diversity Act is expected to stimulate billions of dollars in new investment in Massachusetts that will likely spill over into neighboring states, experts say.

But the renewables mandate is just the tip of the clean energy spear. A recent comprehensive analysis showed that the Bay State could incorporate up to 1.76 GW of advanced energy storage technology over the coming years, making it a national model for converting intermittent energy — mostly wind and solar — into reliable, on-demand power.

"It’s been sort of a rocket shot over the last several months," Lewis Milford, founder and president of the Clean Energy Group, based in Montpelier, Vt., said of Massachusetts’ recent initiatives. "All of these technologies are at different levels of development, but Massachusetts is showing more ambition than almost any other state to move clean energy solutions from bench science and pilot projects into the marketplace."

Next door in Massachusetts, developers are lining up to build more than 50 times the wind energy capacity that Block Island will generate on its peak days, with the first energy off-take auction scheduled for mid-2017 and first generation expected in 2021.

The development tsunami is being led by Danish conglomerate DONG Energy, one of the largest wind power developers in Europe. Dong recently opened a U.S. office in Boston and has committed to build 1,000 MW of offshore wind power at a federal lease site roughly 15 miles south of Martha’s Vineyard in ocean depths of 130 to 165 feet. That’s enough clean energy to power a half-million Massachusetts homes, officials say.

Others looking to tap New England’s offshore winds are Deepwater Wind LLC, the developer of the Block Island Wind Farm, and Offshore MW LLC, a New Jersey-based subsidiary of Copenhagen Infrastructure Partners with development rights on 260 square miles of offshore waters in Massachusetts. That project, known as Vineyard Wind, is also projected to be as large as 1 GW.

But there is more to the Massachusetts energy revolution than the deployment of utility-scale offshore wind.

Massachusetts ranks No. 2 in the nation for solar-sector employment, at roughly 15,000 workers, and saw a 10 percent jump in installed solar capacity from 2014 to 2015, according to the Solar Energy Industries Association. In 2015, the commonwealth installed 340 MW of new solar capacity, making it the nation’s No. 4 solar market.

And while there is still a wide gulf between California, which installed nearly 10 times more solar capacity than Massachusetts last year, and all other states, the margins are narrowing in a number of key areas, including per-capita solar installations and the cost of installed solar on a per-unit basis.

According to the National Renewable Energy Laboratory’s Open PV Project, an online clearinghouse for data on photovoltaic solar energy in the United States, Massachusetts has lower average installed costs for solar, at $5.27 per watt, than most of its peer states, including California ($6.27 per watt), New Jersey ($7.39 per watt), New York ($5.56 per watt) and Connecticut ($5.35 per watt).

"We like to think we’re ahead of California in a friendly rivalry kind of way," said Catherine Williams, spokeswoman for the publicly funded Massachusetts Clean Energy Center (MassCEC), created by former Gov. Deval Patrick (D) and governed by a 12-member board composed of public and private-sector appointees.

"We’ve been beating the drum on a number of different fronts for a number of years," Williams added, "so what you’re seeing today is not an accident. It has been a deliberate, long-term, collaborative and far-reaching effort."

The scope of MassCEC’s work ranges from the installation of solar-powered Wi-Fi hot spots and phone charging stations at public parks, playgrounds and beaches to management responsibility for one of the East Coast’s largest marine commerce terminals at New Bedford.

Others point to Massachusetts’ high concentration of research expertise at places like the Massachusetts Institute of Technology, Harvard University, Northeastern University and the University of Massachusetts System. Boston is also a hub for technology-sector finance and entrepreneurial activity, and is home to influential nonprofits and consulting firms like Ceres, Greentech Media and the Northeast Clean Energy Council.

Francis O’Sullivan, research director of the MIT Energy Initiative, an interdisciplinary research effort whose projects include defining the "Utility of the Future," noted the growing number of clean energy startups emerging from the laboratories and business schools of Massachusetts’ colleges and universities.

"There are superb universities and centers of innovation all over the country," O’Sullivan said. "But in Massachusetts in particular, you have that in close quarters with a very, very innovative set of young and eager people who are looking to deliver change — not just scientists, but businesspeople and so on. It’s that melting pot, coupled with proactive efforts at the state to not only put in place policies but also take down barriers, that has made this work."

Massachusetts also perennially leads the nation in energy efficiency, according to the American Council for an Energy-Efficient Economy. The group has cited the commonwealth’s strong government policies promoting efficiency — including tax rebates, grants and bonds — as well as private-sector initiatives advancing efficiency technologies for new and existing homes and buildings.

For those who have helped Massachusetts’ cultivate its reputation as a clean energy innovator, the prospect of adding substantial new energy storage capacity to increasingly deep wells of renewables and efficiency successes is the core ingredient to complete the clean energy triumvirate.

On Sept. 16, officials revealed just how hot Massachusetts’ energy storage market could be. According to a 228-page "State of Charge" report, the commonwealth could with modest policy levers support 600 MW of advanced energy storage capacity by 2025, netting approximately $800 million in benefits for ratepayers.

With stronger flexing of its energy innovation muscle, Massachusetts could install as much as 1.76 GW of storage over the next decade, with energy savings pushing $3 billion, the report found. The benefits also include removing more than 1 million metric tons of greenhouse gas emissions over 10 years, the equivalent of removing more than 200,000 cars from the road.

Experts like Milford of the Clean Energy Group view the "State of Charge" report as a game changer for New England, and possibly the nation, because it demonstrates that energy storage is ripe for large-scale deployment.

"Energy storage is currently where solar was a decade ago, but now there are over a million solar projects in the nation," Milford said. "To get to scale on storage, smart policies are needed. But so far, we have not seen a comprehensive state model to promote energy storage — that is, until now."

Only two other states have storage mandates — California and Oregon. But as GTM Research noted in a Sept. 19 article on the Massachusetts initiative, the adoption of a 600 MW deployment target would equate to roughly 5 percent of the commonwealth’s peak electricity load, compared to California’s storage target equaling 2 percent of peak load. Oregon’s mandate, meanwhile, amounts to just 1 percent of peak load.

The recognition of Massachusetts’ untapped energy storage market is also drawing attention from the West Coast, where the industry got its start in California, which remains a hub for technology manufacturers, storage system integrators, consulting firms and other storage advocates.

Ted Ko, director of policy at Stem Inc., a developer of energy storage software solutions in San Francisco, said the Massachusetts report helps to break through the greatest barrier facing the energy storage market — "this perception that storage isn’t ready, that it’s expensive, and that it isn’t scalable."

He said Massachusetts, though progressive policies, is poised to become a proving ground for storage technologies that could save New England power consumers millions of dollars while enhancing grid reliability and resilience.

"The technology works. We’ve got the data that proves it," Ko said. "Our technologies are being adopted by a significant number of Fortune 500 companies, and those experiences have shown us again and again that [storage] has far greater benefits than costs in a lot of different places, and in a lot of different applications."