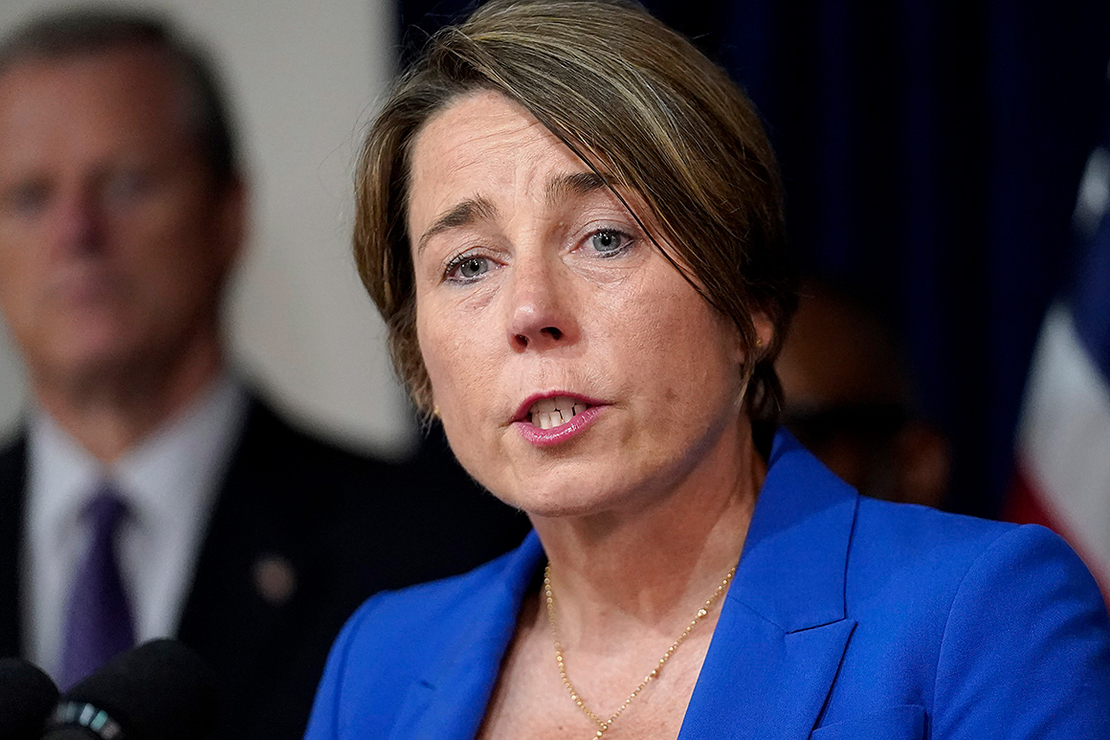 The attorney general of Massachusetts on Friday shot down a Boston suburb’s attempt to phase down fossil fuel use in buildings, angering local climate activists and adding to a simmering national debate over natural gas bans.

Brookline had voted in 2019 to become the first East Coast town to ban fossil fuel hookups in new buildings. That ban was struck down the following year by the office of Massachusetts Attorney General Maura Healey, a Democrat who praised the town’s climate activism but said the ban conflicted with state laws.

On Friday, Healey’s office ruled against those new limits, too, saying they violated multiple state statutes, including a zoning act regulating “the use of materials” in building construction, a law giving the state primacy over building codes and a policy that prescribes “uniform” service from utilities. The finding, which came as part of a routine state review of local ordinances, automatically invalidates Brookline’s bylaws.

Healey’s office has targeted fossil fuels in the past with climate lawsuits against oil and gas majors. In its Friday decision, it said Brookline’s bylaws were “clearly consistent” with her office’s goal of transitioning away from fossil fuels, but that courts had repeatedly found that the three state statutes would preempt the gas restrictions.

“Although the law requires us to disapprove local initiatives inconsistent with our current state statutes, we will continue to lead efforts in Massachusetts and nationally to protect ratepayers and the environment, make our buildings more efficient, and work alongside our communities to reduce the threat of climate change,” Healey said in a statement.

“It’s deeply unfortunate that one of the bluest states is actively preventing its towns and cities from taking the most basic and necessary steps to address our climate crisis,” said Jesse Gray, a Brookline Town Meeting member and co-petitioner of the bylaws, in a statement after the decision.

Gray added in an interview that the latest gas restrictions had tried to “walk a fine line” between a “straight prohibition” on fossil fuel use and an “incentive” to electrify heat sources.

“By rejecting this, I think the AG has made it clear that we are not to meddle in this in any way,” he said. “It’s a smackdown, is what it is.”

The legislatures of at least four states — Rhode Island, Maryland, New York and Massachusetts itself — are considering broad bans on fossil fuel use for building heat. If enacted, they would be the first statewide bans in the country.

It’s unclear if any proposals will make it into law, however. In Maryland, Republican Gov. Larry Hogan has promoted natural gas heat, in recent years, as an alternative to oil. And in New York, where the governor has backed a statewide ban on fossil heat, the state senate’s Democratic energy chair has suggested he might oppose a ban, according to POLITICO.

In other states such as Colorado, legislators are discussing bills that would reduce buildings’ emissions through ramped-up efficiency requirements, while not specifically targeting fossil fuels.

A push for gas bans in other states has faced challenges. Berkeley, Calif., the first city to ban gas in buildings, is still fighting a lawsuit from restaurant owners. And twenty states have laws on the books that prevent cities from restricting fossil fuels, while several others are debating similar measures this year.

In Massachusetts, Brookline’s plan was opposed by a broad front of industry interests: all five of the state’s gas utilities, builders and real estate associations, a plumbers and pipefitters union, and oil and gas groups. They all filed briefs with the attorney general’s office arguing that the bylaws were illegal. Officials with the state’s Board of Building Regulations and Standards and legal counsel for the Department of Public Utilities made similar arguments.

The bylaws were supported by the Sierra Club, which argued in its brief to Healey’s office that they were legal because they sought to incentivize fossil fuel-free buildings, not prohibit a specific fuel. At least four other towns in Massachusetts have been watching the outcome as they weigh whether to enact their own restrictions on gas.

Massachusetts is also in the middle of figuring out how to decarbonize its buildings to meet a 2021 climate law requiring a 50 percent reduction in greenhouse gas emissions by 2030 and net-zero emissions by 2050.

Last week, the state’s Department of Energy Resources issued a straw proposal for a new “stretch” building code that towns and cities could opt into. Under it, new homes would either have to be all-electric or pre-wired so that building owners could more easily move off of fossil fuel heat sources in the future. The codes must be ready for adoption by December 2022 under the climate law.

In Brookline, sponsors of the bylaw were unsatisfied with those stretch codes, saying they were too permissive of fossil fuels.

Lisa Cunningham, a co-petitioner of the bylaw and Brookline Town Meeting member, said in a statement that Massachusetts needs to “get to work passing legislation and regulations that will actually prevent catastrophic climate failure.”

If not, future generations will judge us harshly — and rightly so,” she added.