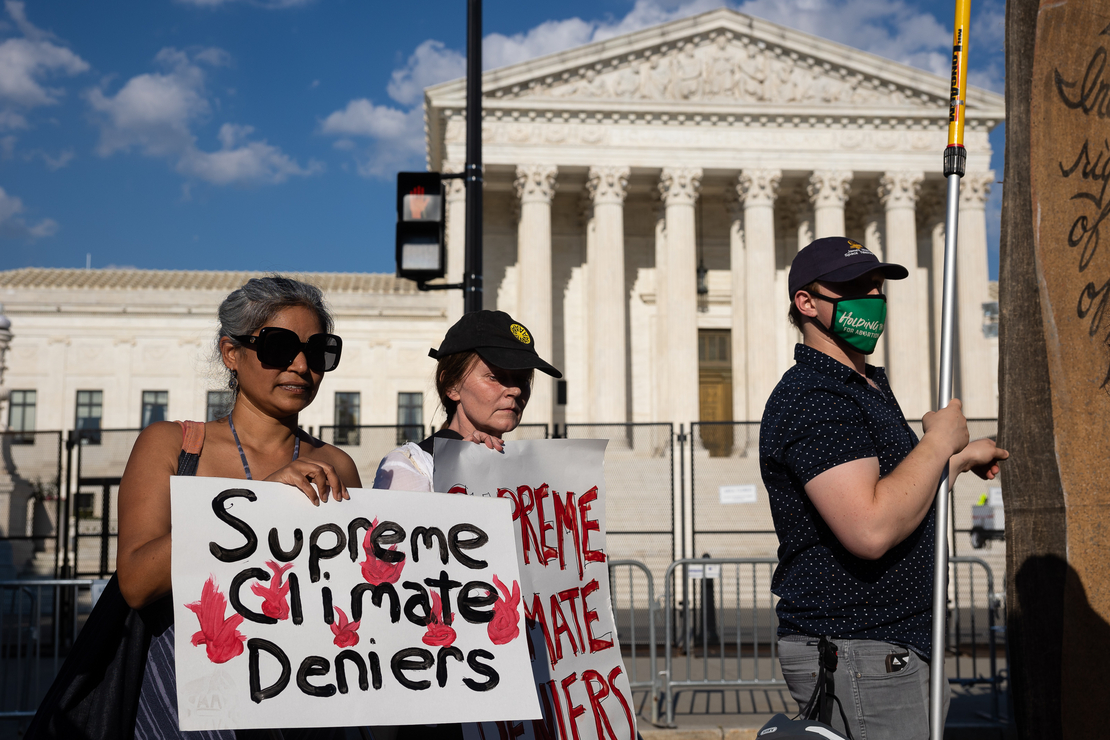 In a scathing dissent yesterday, Justice Elena Kagan rebuked her conservative colleagues for chipping away at a key 2007 finding that is foundational to environmental law.

Kagan rebuked her conservative colleagues who formed the six-member majority in West Virginia v. EPA, which said that the federal government exceeded its authority with the 2015 Clean Power Plan, which set systemwide requirements aimed at shifting the power sector from coal to renewable generation.

Kagan wrote in the introduction of her dissent that the causes and dangers of climate change “are no longer subject to serious doubt” and that expert agencies like EPA play a critical role in addressing it.

“Today, the Court strips the Environmental Protection Agency (EPA) of the power Congress gave it to respond to ‘the most pressing environmental challenge of our time,’” she wrote.

West Virginia did not overturn Massachusetts, which in 2007 recognized greenhouse gases as “air pollutants” under the Clean Air Act and that states can sue EPA if it fails to regulate them.

Kagan cites or refers to Massachusetts five times in her dissent. Neither the majority nor a concurring opinion by Justice Neil Gorsuch mentions the case at all.

But West Virginia did take off the table one regulatory option for EPA — the power to determine under Section 111(d) of the Clean Air Act that the “best system of emission reduction” was for coal-fired plants to either reduce production or shift to renewable generation sources.

The Obama administration had taken that approach in the Clean Power Plan, which was put on hold by the Supreme Court in 2016 and never actually took effect. The Supreme Court’s ruling yesterday invalidated the regulation.

“A decision of such magnitude and consequence rests with Congress itself, or an agency acting pursuant to a clear delegation from that representative body,” Roberts wrote for the majority.

Lisa Heinzerling, a Georgetown University law professor who crafted the winning argument for states and environmentalists in Massachusetts, said she is “struck by how far we’ve come” since the 2007 case. “And I don’t mean that in a good way,” she added.

Heinzerling said that while she doesn’t expect the Supreme Court to overturn Massachusetts, the conservative wing seems willing to strip away meaningful avenues for EPA to regulate emissions from the power sector, the second-biggest contributor of U.S. greenhouse gases.

And the implications go far beyond EPA, she said.

“Any agency rule right now that takes on a new problem in a creative way has a bull’s-eye on it,” she said.

Paul Seby, a shareholder at the firm Greenberg Traurig who represented North Dakota in the West Virginia case, said the Peace Garden State and other challengers have “no bone to pick” with Massachusetts.

It is well-established that greenhouse gas emissions are air pollutants subject to regulation by EPA and the states, he said. The question in this case, he added, concerned states’ role under Clean Air Act Section 111(d) in making greenhouse gas regulatory decisions for existing sources within their borders.

EPA’s role, Seby said, is to issue guidelines for emissions control by the states and provide support and information about tools to achieve the Clean Air Act’s aims — not act as a national energy regulator.

“We accept the premise of Massachusetts v. EPA,” Seby said. “It’s just a question of who implements that in the provisions of the statute.”

The Supreme Court has taken on other EPA climate cases in the years since Massachusetts.

Yesterday’s ruling in West Virginia is in keeping with the trajectory of these cases, said Allison Wood, a partner at the firm McGuireWoods who was involved in Massachusetts, AEP and UARG.

“The court is willing to allow the regulation of greenhouse gases under the Clean Air Act — that’s Massachusetts — but it’s going to take a hard look at what EPA tries to do under the Clean Air Act and make sure that it hews closely to the statute,” she said. “And here in the West Virginia case, they found that what the Obama EPA was trying to do in the Clean Power Plan went too far.”

But environmental lawyers have expressed concern that the Supreme Court’s six-justice conservative majority could find ways in future cases to upend the Massachusetts decision.

Jeffrey Bossert Clark, the lawyer whose lower court victory in Massachusetts was later overturned by the Supreme Court, wrote on Twitter yesterday that West Virginia was “a July 4th birthday present” for the nation.

As head of the Justice Department’s environment division under former President Donald Trump, Clark oversaw the defense of the Affordable Clean Energy rule, which gutted the Clean Power Plan and was later struck down by a federal appeals court, paving the way for the West Virginia case.

He now faces allegations that he worked with the former president to pursue baseless fraud claims in the 2020 election (E&E Daily, June 24).

Clark added on Twitter yesterday that the Supreme Court’s ruling in Massachusetts might have “come out the other way” under the major questions doctrine and called for the case to be “reconsidered.”

Concerns about the stability of settled law were heightened last week after the court in Dobbs v. Jackson Women’s Health Organization overturned nearly 50 years of legal precedent recognizing the constitutional right to an abortion (Greenwire, June 24).

Massachusetts is “slowly becoming insulated as precedent, but we’ve seen what this court thinks about precedent,” said David Bookbinder, chief counsel at the Niskanen Center. “I’d be more confident about that if Dobbs hadn’t been decided last week.”

But Bookbinder, who represented environmentalists in Massachusetts, drew a distinction between constitutional issues in cases like Dobbs and fights over the definitions of terms in statutes — such as “air pollutant” in the Clean Air Act.

“Dobbs makes me uneasy because they’re really cavalier about precedent,” he said, “but we’re in a really good position because we’ve defined a word, and courts are reluctant to redefine a word.”