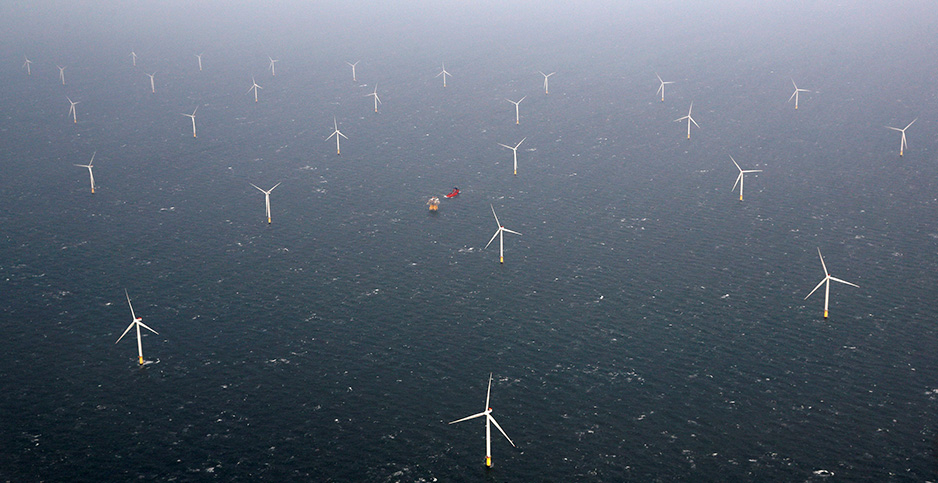 Preparing for an explosion in offshore wind construction, the Department of Energy is partnering with the International Energy Agency (IEA) to help design turbines that will be three times larger than current models.

The bigger machines are intended to generate a surge of cheaper renewable electricity for the United States by 2030 as multiple states along the coasts work to build offshore wind farms.

The goal is a computer model that will help companies develop taller and more efficient turbines that can be clustered near major cities.

"We needed a new reference turbine to leap ahead of where industry is today — but not so far ahead that you’d need advanced technology to get there," explained Garrett Barter, a senior research engineer at the National Renewable Energy Laboratory (NREL).

"We’re seeing the first steel go in the water for fixed-bottom foundations," Barter said in a statement. "Hopefully a commercial floating offshore wind project in the United States will come to fruition in the next 5 to 10 years."

Europe has long been the global leader in offshore wind generation, as the United States focused on developing land-based wind facilities. More than 4,000 offshore wind turbines have been erected in the waters of 11 countries in Europe. Their combined power generates 15.8 gigawatts of electricity, roughly enough to supply around 15 sizable cities.

The United States is just getting started with offshore wind, marked by the completion of a five-turbine complex off the coast of Rhode Island in 2016. It produces 30 megawatts of electricity, enough power for approximately 19,000 homes.

U.S. turbine manufacturers and utilities hope future offshore wind facilities will feature bigger and more efficient turbines. Some of the most common land-based turbines use a 212-foot tower and have blades that whirl within a diameter of 144 feet.

The offshore turbines installed in Rhode island are twice as tall and have a rotor diameter of about 495 feet. And because size promotes greater electricity production, even at slower wind speeds, the offshore turbines on the drawing boards are expected to be still larger.

According to DOE, there are more than 28 U.S. offshore wind projects in the planning stage. The biggest clusters will run along the East Coast, from Massachusetts to Virginia.

An older offshore turbine design, used by DOE since 2005, could produce 5 MW of electricity. Part of the new challenge is to create a reference computer model for a 15-MW turbine, which could sit on foundations in relatively shallow coastal waters or float in deeper locations.

The idea is to let multiple wind turbine manufacturers use the "open source reference" computer model without compromising proprietary information, which would be added later to build prototypes.

The use of a basic model is intended to support more complex turbine designs. Larger offshore machines, for example, would be able to have substantially larger rotor areas, allowing them to capture more wind. But they would also "face distinct installation and maintenance challenges that were insufficiently addressed by earlier reference wind turbines," according to the NREL statement.

The design effort for a 15-MW turbine is a global partnership led by the IEA. It includes major turbine manufacturers such as General Electric Co. and academic institutions like the University of Maine, which is helping to design a floating turbine substructure.

Walter Musial, a scientist who is leading NREL’s current effort to explore the use of offshore wind turbines in the Gulf of Mexico, predicts that larger, more efficient turbines will be needed to bring cheaper renewable energy to coastal cities.

"To have a wind farm large enough to power Long Island in New York state would take an area half the size of Long Island. Putting it offshore makes a lot of sense," he explained in an interview.

He noted that oil and gas companies that built offshore drilling rigs in the Gulf of Mexico in the 1980s later developed technologies that led to the first offshore wind turbines.

A study by the University of Delaware last year predicted that the supply chain needed to build offshore turbines to feed power to seven East Coast states by 2030 would generate nearly $70 billion in economic activity and at least 40,000 full-time jobs.