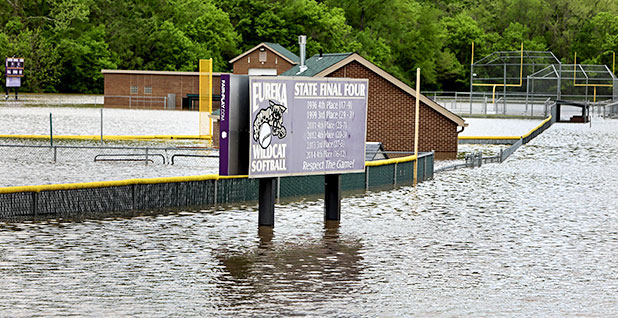 Floodwater from the Meramec River covers some athletic fields at Eureka High School on Monday in Eureka, Mo. In January last year, Meramec River floodwater encroached on the school's buildings and ruined the gym floor. School employees are sandbagging around the building to try to keep the water out this time. Photo by David Carson/St. Louis Post-Dispatch, courtesy of AP Images.

Mayors along the Mississippi River said yesterday that they worry about more frequent extreme weather like the storms that killed as many as 20 people across a wide swath of the South and Midwest in recent days.

Beyond the loss of life, the storms and associated flooding have economic ramifications that linger for years, said Mayor Brant Walker of Alton, Ill., a town 25 miles upriver from St. Louis. The 180-year-old town has had five flood events in the past four years, he said. Four of those have been in the top 10 flood events in Alton’s history.

"This is one of the many consequences associated with elevated climate risk," Walker said. "We’re now living in a world of extremes on the Mississippi River. We just don’t get normal spring rains anymore. We get huge downpours."

Walker was among several mayors along the Mississippi who spoke yesterday as part of an effort by the Mississippi River Cities & Towns Initiative to bring attention and investment in resilient infrastructure to the 10 states that border the river (Greenwire, March 2).

The storms follow historic flooding that in 2016 that added up to more than $10 billion in disaster impacts along the 10-state corridor. They’ve been working on projects that help mitigate flooding, said Mayor Frank Klipsch of Davenport, Iowa. In his city, he boasted of a riverfront park that, instead of levees, allows floodwater to inundate its borders by design, and then recede back into the river.

"Resilience work protects jobs, secures our economy and enhances both the built and natural infrastructure," Klipsch said. "Things don’t look to be letting up anytime soon, and these storms over the weekend show that."

Flooding has long been a part of life along the Mississippi. But in recent years, catastrophic flooding, often driven by unexpectedly heavy rain events, has swept through many states. Some were tropical systems, like Hurricane Matthew. Many more were big rain events that caught people by surprise in places like Houston and Baton Rouge, La.

Researchers have been trying for some time to determine how much of a connection exists between climate change and extreme events like droughts and major rainstorms. Last week, climate scientists released a study in Proceedings of the National Academy of Sciences detailing a four-step framework for testing whether global warming contributes to record-setting weather events.

Noah Diffenbaugh, a professor of earth system science at Stanford University, who led the study, told E&E News that people make a lot of short-term and long-term decisions that depend on the weather, "so it makes sense that they want to know whether global warming is making record-breaking events more likely" (Climatewire, April 25).