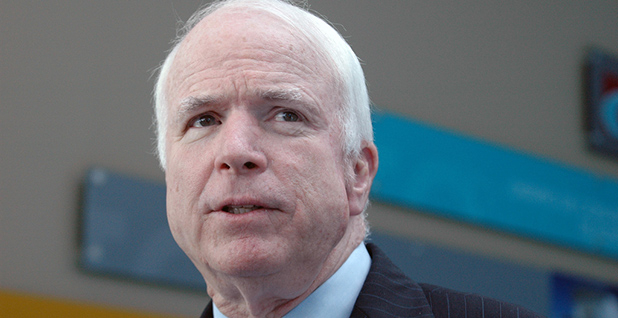 Sen. John McCain, the Arizona Republican whose legacy as a fiercely independent political maverick includes leading the early fight in Congress to tackle climate change, is being mourned across the political spectrum after succumbing to a yearlong battle against brain cancer over the weekend. He was 81.

McCain died Saturday afternoon at his ranch near Sedona, Ariz., surrounded by his wife, Cindy, and family members, his office announced.

"At his death, he had served the United States of America faithfully for sixty years," read the brief statement.

The news brought an immediate outpouring of praise from politicians of all stripes.

"He showed us that boundless patriotism and self-sacrifice are not outdated concepts or cliches, but the building blocks of an extraordinary American life," he said.

"As you go through life, you meet few truly great people," Schumer said. "John McCain was one of them."

McCain will lie in state in the Arizona Capitol on Wednesday — which would have been his 82nd birthday — before being transported to Washington, D.C., where he will receive the same honor in the U.S. Capitol Rotunda.

At McCain’s request, former Presidents George W. Bush and Barack Obama will eulogize the man, who unsuccessfully challenged both for the presidency, at the Washington National Cathedral. McCain will be buried at the U.S. Naval Academy in Annapolis, from which he graduated in 1958.

In doing so, McCain was following in the footsteps of his father and grandfather, both of whom were Navy admirals.

As a Navy pilot in Vietnam, McCain was shot down over Hanoi in 1967 and was subsequently held as a prisoner of war for five years, a period during which he was tortured so badly that he was unable to raise his arms over his shoulders for the rest of his life.

McCain later entered politics, serving two terms in the House before being elected to the Senate in 1986. He was two years into his sixth term when he died this weekend.

McCain ran for president in 2000 and again in 2008, when he secured the Republican nomination but lost to Obama.

‘A fidelity to something higher’

The contrasts between the grizzled war hero and the freshman Democratic senator from Illinois were striking, as Obama noted over the weekend.

"But we shared, for all our differences, a fidelity to something higher — the ideals for which generations of Americans and immigrants alike have fought, marched, and sacrificed," Obama said in a statement marking his former rival’s death.

"We saw our political battles, even, as a privilege, something noble, an opportunity to serve as stewards of those high ideals at home, and to advance them around the world," Obama said.

McCain’s political career was defined by his independent streak, where he fought against his own party on issues such as campaign finance and environmental protection.

He was the original climate hawk, taking to the Senate floor in 2001 with his close friend, then-Sen. Joe Lieberman (D-Conn.), to call for U.S. leadership in tackling a global problem that "must be resolved globally."

The pair’s contribution to the debate was an emissions trading system under which total U.S. greenhouse gas releases would be capped with regulated entities allowed to trade the right to emit. Throughout the Bush administration, the two labored on several iterations of what came to be known as the "McCain-Lieberman bill."

When McCain outlived his primary rivals to capture the GOP presidential nomination in 2008, it appeared to be a watershed moment for U.S. climate policy with both nominees vowing to tackle warming.

In a May 2008 speech, McCain called the warming planet "the most serious of all" of the environmental challenges facing the world.

"Whether we call it ‘climate change’ or ‘global warming,’ in the end we’re all left with the same set of facts," he said in a speech at a wind manufacturing facility in Oregon.

"The facts of global warming demand our urgent attention, especially in Washington," said McCain. "Good stewardship, prudence and simple common sense demand that we act to meet the challenge, and act quickly."

However, as oil prices started to rise well north of $100 a barrel that summer, the political winds surrounding energy began to shift.

After losing the White House to Obama, McCain largely sat out the later congressional fights to legislate on climate change, as his past stances on the issue became a liability in his own re-election fight in 2010, when he was challenged by a tea party upstart.

When asked about climate change in his later years, McCain often would complain that Democrats’ reluctance to embrace nuclear power had crippled efforts to legislate on the issue.

However, McCain last year returned to his maverick environmental roots, when he surprisingly voted down a disapproval resolution that would have blocked the Obama-era Interior Department methane rule, saying that he wanted to see a new rule promulgated to address the issue (Greenwire, May 10, 2017).

The practical impact of having a vacant seat on the Senate’s day-to-day business is unclear, given that McCain was largely absent from the Senate all year and GOP leaders had not counted on his return to cast votes.

Sen. Jim Inhofe (R-Okla.), who has been leading the Armed Services Committee in McCain’s absence, is likely to continue in that role.

But McCain’s death will immediately have political repercussions, coming as it does at a time when the GOP Senate majority sits on the razor’s edge, with a half-dozen toss-up races this fall.

Arizona GOP Gov. Doug Ducey will choose a replacement, given that the deadline for a special election passed on May 30.

Whomever Ducey appoints will hold the seat until 2020, when a special election will be held, and the winner will then serve the rest of McCain’s term until 2022, when they can run for a full six-year Senate term. Arizona law requires the appointee to be of the same party as McCain.

Ducey, who is up for re-election this fall, has avoided speculation in recent months about a possible replacement while criticizing those seen as publicly seeking the seat. He will not appoint himself, he said.

"To the politicians out there that have been openly lobbying for this position, they’ve basically disqualified themselves by showing their true character," he told an Arizona radio station last year.

McCain’s wife, Cindy, has come up as a possible appointment. Other names include Ducey’s Chief of Staff Kirk Adams, former gubernatorial candidate Barbara Barrett and former Sen. Jon Kyl, according to a recent article by The Arizona Republic.

Arizona’s other Senate seat will hold primaries tomorrow after Sen. Jeff Flake announced his retirement (see related story). Ducey is likely to wait until after those contests to announce a replacement for McCain.

Ducey’s primary challenger, Ken Bennett, the former secretary of state, has repeatedly said that Cindy McCain should not be appointed.