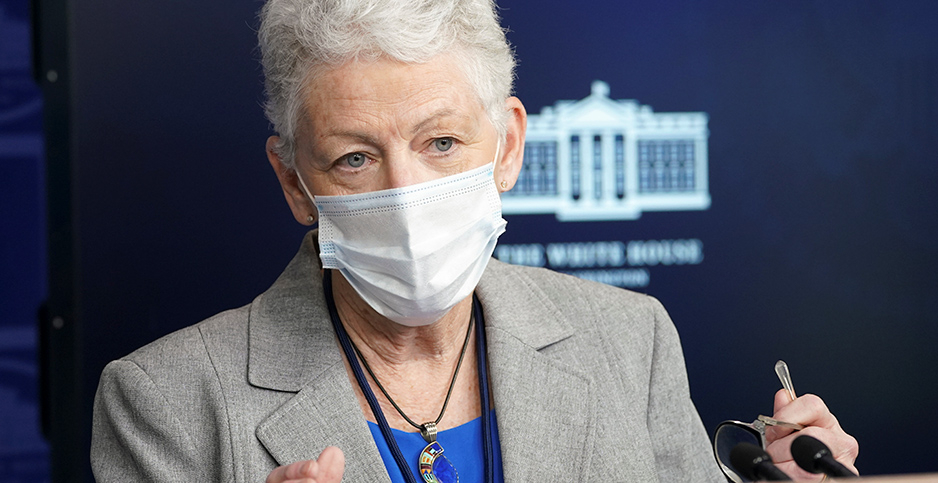 The Biden administration is trying to tone down tensions with the oil industry — quietly.

Two months into a presidency marked by drilling restrictions and a major pipeline closure, the administration is beginning to open its doors to the companies most threatened by Democrats’ climate agenda.

National climate adviser Gina McCarthy met virtually yesterday with oil companies and trade groups. The White House declined to disclose who participated in the meeting, which wasn’t scheduled publicly and was first reported by Bloomberg.

The fossil fuel industry will get the administration’s ear again Thursday — this time in public — as the Interior Department holds a virtual forum on the future of oil and gas leasing on public lands.

For an industry that’s spent the past year all but warring with Biden, the opening couldn’t come at a better time.

Democrats are looking to corporate America and right-leaning groups for help passing their infrastructure agenda through a narrowly divided Congress. While that package will almost certainly boost clean energy and electric vehicles, the fossil fuel industry also could secure support for priorities such as carbon-capture funding and quicker permitting.

"She made clear that the Administration is not fighting the oil and gas sector, but fighting to create union jobs, deploy emission reduction technologies, strengthen American manufacturing, and fuel the American economy," according to the White House statement.

McCarthy also solicited the oil industry for "ideas for addressing the climate crisis and reducing emissions while supporting local economies and job creation."

Biden campaigned on ending new fossil fuel extraction from federal lands and waters, and he promised during his first debate against President Trump that he would "transition from the oil industry." Once in office, Biden kicked off his administration with two dramatic moves: yanking permits for the Keystone XL pipeline and halting new drilling leases on public lands.

Biden’s administration now says Interior is only "pausing" leases temporarily to reevaluate the program’s details. That was one of the topics the oil industry discussed during yesterday’s meeting with McCarthy, which also included officials from Interior.

The White House declined to explain why they were keeping industry participants secret, but an official noted the same was true for meetings with the airline and auto industries.

One group in the meeting was the American Petroleum Institute, the country’s largest oil and gas trade group. In a statement, API President Mike Sommers said his group is "committed to working with the White House to develop effective government policies that help meet the ambitions of the Paris Agreement and support a cleaner future."

Fossil fuels will be key to that future, he said.

"Over the long-term, the world is going to demand more energy, and independent forecasts show that natural gas and oil will provide approximately half of the global energy mix for decades to come. At the same time, we must tackle the challenge of climate change, and that’s where our industry continues to lead by investing in low-carbon solutions," he said.

"I told Gina McCarthy that our natural gas utilities are committed to delivering affordable, reliable energy for Americans as we emerge from this pandemic while significantly lowering emissions and putting our nation on a path towards a cleaner energy future," Karen Harbert, AGA’s president and CEO of the American Gas Association, said in a statement.

Two oil groups that weren’t invited were the Independent Petroleum Association of America, which said it was represented at the meeting by its member companies, and the Western Energy Alliance, which represents the firms most impacted by Biden’s public lands pause and has sued to overturn it.

That pause will be the focal point of Interior’s Thursday event, which is also scheduled to feature the oil industry and its associated unions, along with conservation and racial equity groups.

API, the National Ocean Industries Association and the American Exploration & Production Council will represent the oil and gas sector, while its workers will be represented by the United Association of Union Plumbers and Pipefitters and North America’s Building Trades Unions.

Other participants include the NAACP, the Alaska Federation of Natives and the Deep South Center for Environmental Justice.

While McCarthy huddled with the oil sector, other members of the White House and federal departments met with the outdoor recreation industry.

Biden’s goal of conserving 30% of U.S. lands and waters was the main subject of the meeting, according to a readout from the White House Council on Environmental Quality.

The administration was represented by officials from CEQ, Interior, the Agriculture Department and NOAA.