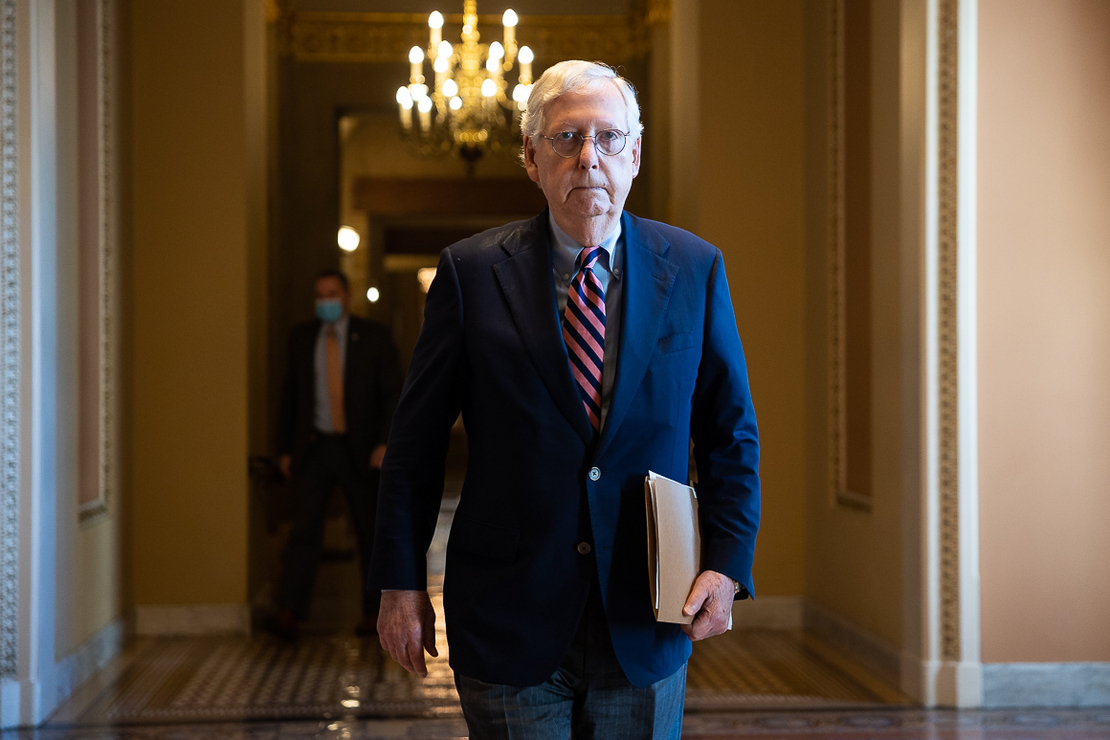 Last week’s left-wing demonstration at the Interior Department has now given political ammunition to the Biden administration’s right-wing critics.

Today, Senate Minority Leader Mitch McConnell of Kentucky added to the hubbub as he denounced both the “mob of extremists” that occupied the lobby of Interior headquarters Thursday and an administration response he characterized as tepid.

“Political violence and attacks on government buildings are flat-out wrong no matter who is perpetrating them or what they claim to believe,” McConnell said. “That’s why it’s puzzling that last week’s incident attracted so little attention and condemnation.”

McConnell said protesters “shoved through blocked doors, they hurt the police and security personnel who tried to hold the line.”

McConnell added that “just a few hours after the violence and the break-in occurred, instead of condemning the radicals, the Biden administration praised them, praised them.”

His interpretation, though, relied on a narrowly edited version of an Oct. 14 exchange between a reporter and White House spokesperson Jen Psaki.

“The White House was asked about the protests multiple hours after the break-in and said, this is a direct quote, ‘Of course we’re listening to advocates and people have been elevating the issue of climate for decades they have important voices.’”

A transcript of the Oct. 14 briefing, though, shows the reporter asked Psaki about the policies being promoted by demonstrators and not the actions at Interior.

Reporter: “Hundreds of climate protesters, I think they’re gathered outside the White House right now, they’re demanding Biden stop approving fossil fuel projects and declare a clear climate emergency. I wonder if those are actions that the administration is considering or listening to their demands?”

Psaki: “Of course we’re listening to advocates and people who have been elevating the issue of climate for decades. They have important voices, and they put climate on the front of the agenda when it wasn’t 10 years and 20 years ago. I would encourage anyone out there to look at what the president is proposing, which is trying to push across the finish line an enormous investment and commitment in the climate crisis.”

“Multiple injuries were sustained by security personnel, and one officer has been transported to a nearby hospital,” Interior spokesperson Melissa Schwartz said Thursday afternoon in a statement.

According to protest organizers, the law enforcement response included using stun guns on "at least two people and hitting others with batons,” and they asserted that “an independent Indigenous media person was assaulted by the police and had his equipment broken.”

“You can arrest us, tear gas us, poison us but there will always be more hearts to continue the song until we are all free,” the Indigenous Environmental Network said in a statement.

Former Interior Secretary Ryan Zinke, who is now running for a House seat in Montana, offered his own hot take via Twitter last week.

“Never under my watch would such blatant lawlessness and endangerment of law enforcement and staff have been permitted,” Zinke declared.