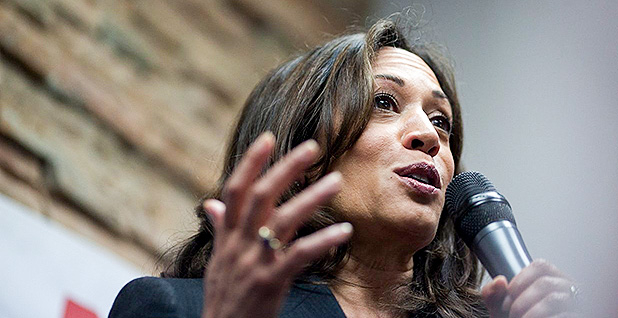 Addressing reporters outside the Senate floor, McConnell said, "It’s a debate we’ll have in all likelihood sometime before the August break."

To counter McConnell’s maneuver, several Democratic senators said this week that the caucus was weighing the possibility of voting "present" — a move similar to what Democrats did in 2017 when Republicans forced a vote on "Medicare for All," another issue among Democrats and the left (Climatewire, Feb. 26).

"We’re not going to participate in shams," Senate Minority Leader Chuck Schumer (D-N.Y.) said in his own remarks yesterday to reporters.

"They are in the majority," Schumer said. "We can’t do anything on climate unless they get something done."

Delaying a vote on the resolution, however, has some political benefit for Democrats, as the entire caucus hasn’t agreed on voting "present" together.

Asked whether every Senate Democrat would vote in lockstep, Sen. Chris Coons (D-Del.) said, "I don’t know. We’ll have to see when we get there."

As for what she would do, Sen. Kamala Harris (D-Calif.) — a presidential contender and a co-sponsor of the "Green New Deal" — said she "supports it, as you know." But she hasn’t announced a decision on how she would respond to McConnell’s move.