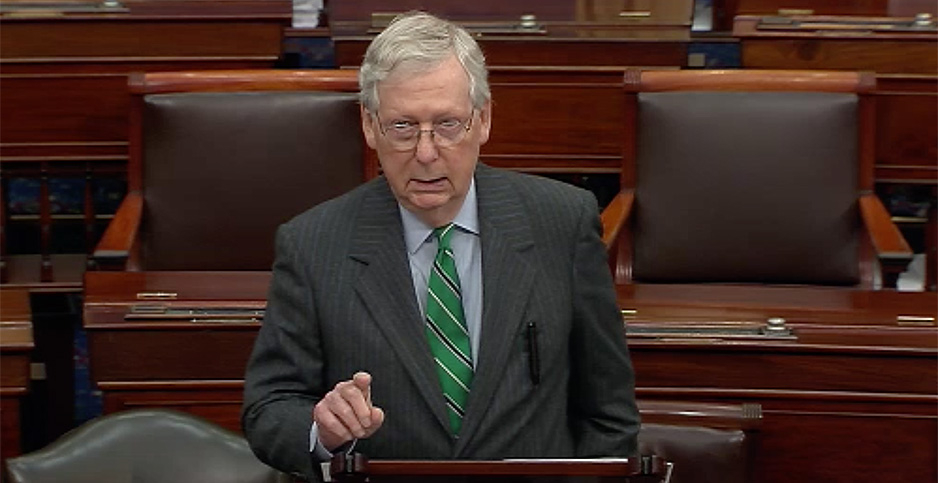 Senate Republicans may release legislation as soon as today for the next round of coronavirus stimulus, as lawmakers and interest groups race to shape the emerging package.

The forthcoming plan will be based on four "pillars" that will include small business relief, direct payments to individuals and "targeted lending" to affected sectors, as well as more appropriations for "the front line of our fight against the virus itself."

McConnell did not detail which sectors may qualify for federal loans but defended the need to do so. Congress has already passed two previous bills in response to the coronavirus.

"Entire sectors are being crushed — crushed by public health guidance, which is obviously no fault of their own," he said.

"Let’s be clear about something: From small businesses to key sectors, we’re not talking about so-called bailouts for firms that made reckless decisions. … We’re talking about loans, which must be repaid."

McConnell did not detail timing of the plan, but Capitol Hill sources have indicated it will likely emerge today.

The Republican leader said that after the legislation passes, appropriators will work on sending agencies additional dollars. The administration has made a request along those lines (Greenwire, March 18).

"We’ll need to turn right away to a bipartisan appropriations process," McConnell said, adding that the third stimulus "is not Congress’ last chance to legislate."

Senate Minority Leader Chuck Schumer (D-N.Y.) said Democrats are "ready and eager to look at what Republicans put together and work with them."

But the third coronavirus package must be "a workers first proposal," he added. "Workers first. That’s our motto."

Schumer said if there is going to be "a bailout of any sort of industry, workers’ priorities and protections must be included."

The minority leader also said the next legislative package must include massive aid for the health care system, hospitals and medical supplies, like ventilators and nasal swabs. "We need a Marshall Plan for our health care system," Schumer said.

He said he and a group of Democrats would introduce a bill today to cancel student loan payments during the coronavirus outbreak.

Schumer also noted that McConnell is not currently coordinating the GOP plan with Democrats and urged top House and Senate leaders to commence bipartisan talks immediately. "Time is of the essence," Schumer said.

‘A lot of goodwill’

Speaking at the White House this morning, President Trump said the administration is working with both parties. "There’s a lot of goodwill going on," he said.

In the House, Democrats are soliciting ideas for the third stimulus, which one aide said would include "robust appropriations for a strong federal, state and local response."

While the White House is seeking nearly $46 billion for federal agencies, the aide said the amount is "not sufficient to the monumental task at hand, and significantly more funding will be needed beyond their request."

House Financial Services Chairwoman Maxine Waters (D-Calif.) yesterday released a list of ideas to help the economy during the COVID-19 outbreak, including a proposal to link federal assistance to corporations with "responsible use" such as more environmental disclosures.

In response, House Majority Leader Steny Hoyer (D-Md.) announced today that the House will not return "until we are in a position to vote" on the next round of stimulus (E&E Daily, March 19).

As Senate Republicans move to unveil their bill, outside interest groups are pushing their own ideas for a stimulus.

Major renewable energy trade groups wrote to House and Senate leaders today to call for consideration of supply-chain disruption issues related to COVID-19, including easing construction deadlines for qualifying for federal tax breaks and the creation of a new incentive for energy storage.

"Like all sectors of our economy, the renewable and clean grid industry — including developers, manufacturers, construction workers, electric utilities, investors and major corporate consumers of renewable power — needs stability," wrote the American Council on Renewable Energy and other renewable trade groups.

"The current uncertainty about the ability to qualify for and monetize tax incentives will have real and substantial negative impacts to the entire economy."

The Sierra Club weighed in yesterday as well, urging congressional leaders to oppose relief for fossil fuel companies and to include "a robust package of critical clean energy tax incentives" in the next round of stimulus.

"During this emergency, specific attention should be paid to the emergent, yet vulnerable, clean energy industry," Sierra Club Executive Director Michael Brune wrote.

And facing declining public transit use amid the virus outbreak, more than 200 officials representing advocacy groups and municipalities are calling for a $13 billion infusion for transit agencies during the pandemic.